A number of readers have asked if I thought the U.S. was in a recession or heading into one. Others have asked if I thought this recession would be worse than most. Although I'm not an economist, it is possible to make some judgements about the direction of the economy by looking at various financial markets. Two of them are stocks and commodities. On July 18, I wrote an article suggesting that commodities were peaking based on a number of technical indicators. That article also contained a headline that read: "Commodities Peak During Bear Markets". Here is an excerpt from that earlier message: "At the end of an economic expansion, stocks usually peak before commodities. If stocks enter a bear market (and a recession starts), commodities usually enter a downside correction as well. During the stagflation years of the 1970's, serious downturns in stocks caused profit-taking in commodities. The commodity rally resumed after the stock market and the economy turned back up again." Stocks lost half of their value during 1973 and 1974 which led to a recession the second year. Commodities also dropped during that recessionary year. Historical studies show that stocks peak anywhere from six to nine months before the economy. From October 2007, that would put the outer target for an economic peak in July 2008 which is when commodities peaked. 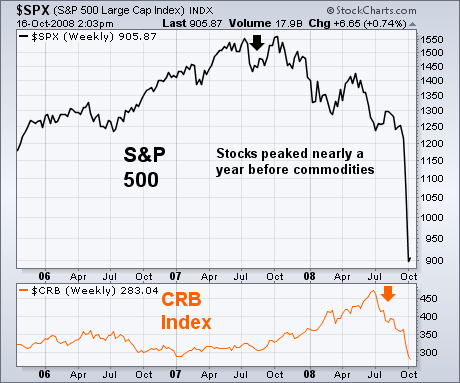