The bear market reasserted itself last week in a violent manner; trading sharply higher and lower in a matter of hours and days. This isn't your garden variety bear market as this one smells and feels much different given the enormity of the credit crisis. And there is no end in sight to the crisis from a fundamental perspective, which is giving rise to increasing calls that a "crash" is imminent. Perhaps that indeed what lurks around the corner, but crashes are very low probability events as they reside at the "end of the tail" of the probability distribution curve. We would argue we've had a serious of "mini-crashes" if one looks at the homebuilders; the oil and oil service sector; and the commodity miners. The decline in the homebuilders took 2-years to accomplish, while the oil/oil service and commodity miners took all of 3-months. 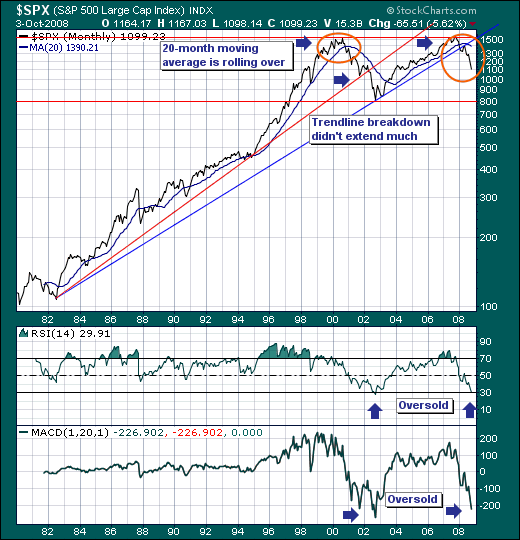 The question where does that put us now is a very good one. From a longer-term technical perspective, the S&P monthly chart has broken below its longer-term bull market trendline which would argue for sharply lower prices. However, the 14-month RSI is oversold for only the second time since 1980, with the other time occurring at the October-2002 bottom. This certainly puts the risk-reward towards a countertrend rally in the least. Shorter-term, we find the price distance below the 20-month moving avearge to be on par with that seen at other interim 2000-2002 bear market lows. The 1050-1080 zone is about as low at it gets. Again, this would argue for countertrend rally in the least.

Therefore, the risk-reward favors a tradable rally from current-to-lower levels as quite a bit of negative news has been discounted; the question however, still remains whether the rate of increasingly bearish fundamental news and earnings will overwhelm the technicals. It's all about risk-reward, and it would seem to us barring a low probability crash...we should be considering long positions into this decline.