Over the past couple of weeks, I've suggested taking no new action in the stock market. Part of my reasoning is that we've been recommending a bearish strategy for the past year and see no reason to change that. Selling should have been done earlier in the year when major sell signals were first reported here. My January 3 Market Message reported on the major sell signal given by the monthly MACD lines last December (Chart 1). A number of other technical indicators also give major sell signals at the start of the year that we reported on. None of those sell signals have been reversed and we've made several bearish recommendations since then. I realize that there are opportunities for short-term traders. My main focus, however, remains on intermediate and major trends. Since there's little justication for buying, the main question is whether we should be doing more selling at the moment. Here's why I don't think October is a good time to sell. 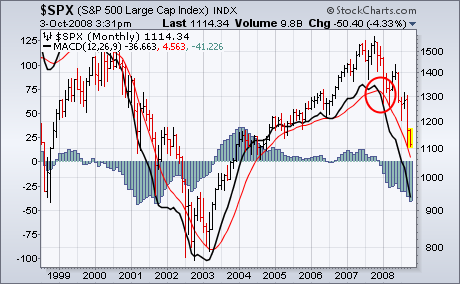