QQQQ broke consolidation resistance with a big surge on the first trading day of the year. After surging in late November and early December with two gaps, QQQQ stalled for most of December with a flat trading range. The consolidation pattern looks like a flag and the upside breakout calls for continuation of the Nov-Dec surge. For an upside target zone, the October-November highs mark the next resistance area around 34-36. 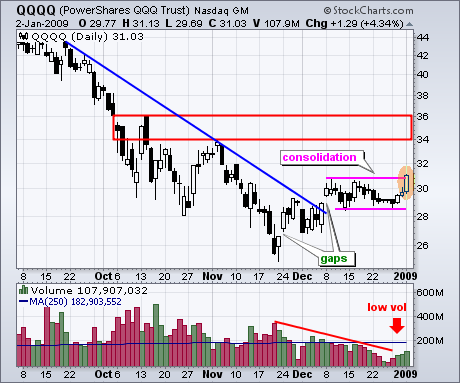 As expected, QQQQ volume levels have been low throughout the holiday season. In fact, QQQQ volume has been uninspiring throughout most of December. Volume was even below average on Friday's big move. While low volume advances are suspect, price action is first and foremost. The consolidation breakout should be considered bullish until proven otherwise. Volume will likely return in early January and it is important that the consolidation lows hold. A break below these lows on expanding volume would be bearish.