In my January 2 article I pointed out that the stock market was overbought by bear market standards, but that the rally had plenty of internal room for prices to expand upward if bullish forces were to persist. There was a brief rally and a small breakout, but then the rally failed, breaking down from an ascending wedge formation. I wasn't really expecting a bullish resolution, but one must keep an open mind when appropriate conditions appear.

On the chart below you can see the short-term declining tops line through which the breakout occurred. Instead of a buying opportunity, it was a bull trap. At this point we must assume that the November low will be tested. Note also that the PMO has crossed down through its 10-EMA, generating a sell signal. 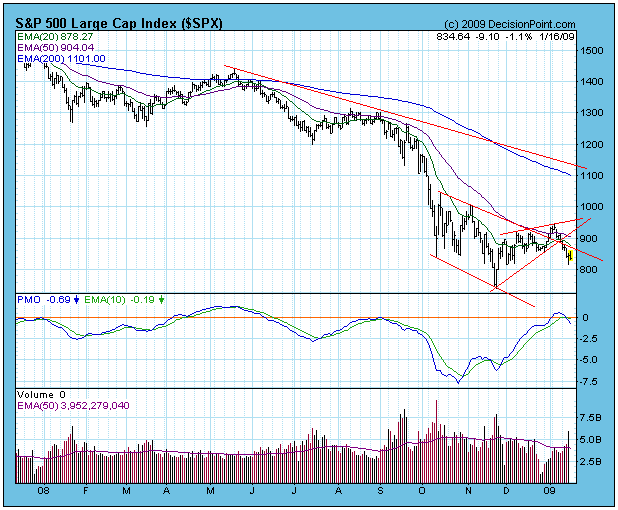 The weekly chart below gives a better perspective, I think. It shows how aggressive the current down move is compared to the price activity that precedes it. Also, the PMO has topped below its moving average, a bearish sign. Prices are once again approaching the long-term support drawn from the 2002 lows. A successful retest could set up a double bottom from which another intermediate-term rally could launch, but in a bear market we shouldn't bet on that outcome. 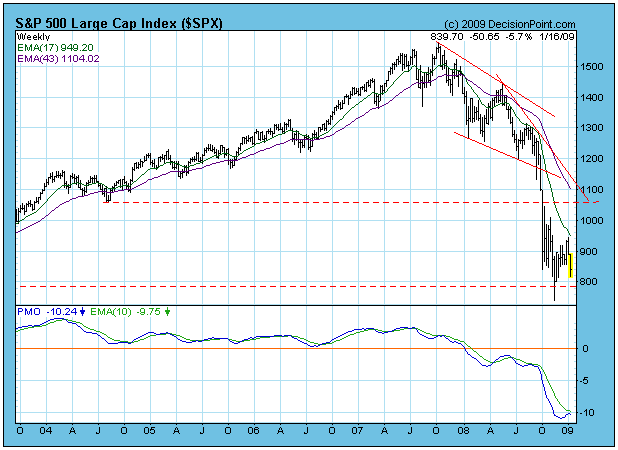 For many months I have been emphasizing that our analysis should be biased toward bearish outcomes because we are operating in the longer-term context of a bear market. The tide is going out and it is foolish to try to swim against it. In a much broader context, we are in the midst of a global debt collapse that is only in the beginning stages. I find it impossible to imagine economic circumstances in the immediate future that would be even remotely favorable to stocks.