GOLD TOUCHES $1000 FOR FIRST TIME IN A YEAR... A number of financial markets are testing important chart points. Let's start with gold. Bullion touched $1,000 today for the first time since last March. Chart 1 shows the streetTracks Gold Trust (GLD) very close to touching its March 2008 high at 100. On a short-term basis, however, the price of gold looks overbought. Some profit-taking from this level wouldn't be surprising. If that's true, some counter-trend moves may be seen in some other markets. The dollar may have also started one. 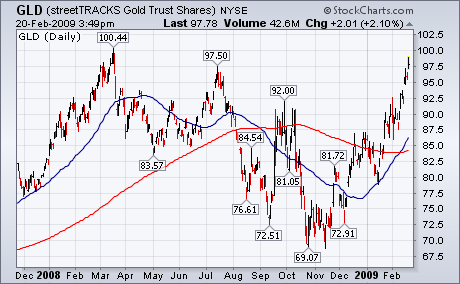 DOLLARS DIPS AS EURO BOUNCES ... The U.S. Dollar has been rising along with gold since December. Chart 2, however, shows the Power Shares DB US Dollar Index Fund (UUP) dropping today from chart resistance near its November high. Chart 3 shows the Euro bouncing off chart support along its November low. That suggests that some "short-term" market dynamics might be changing. A weaker dollar might contribute to some profit-taking in gold and buying in some oversold commodities. A bouncing Euro might suggest that the recent selloff in stocks is overdone as well. I've shown before that stocks have been trading in tandem with the Euro since midyear and opposite the dollar. 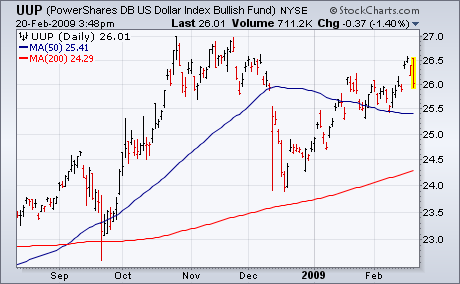 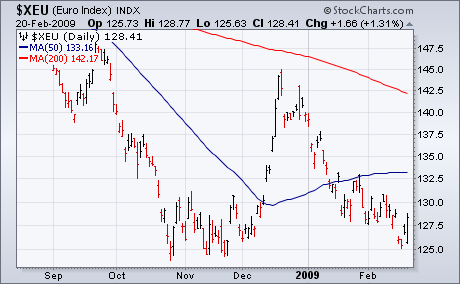