After a sharp advance the last two weeks, SPY hit a classic resistance zone and pulled back over the last two days. Three items confirm resistance in the low 80s. First, broken support around 80-81 turns into resistance. Second, the falling 50-day moving average marks resistance. Third, the advance retraced 50% of the Jan-Mar decline, which is typical for a retracement. 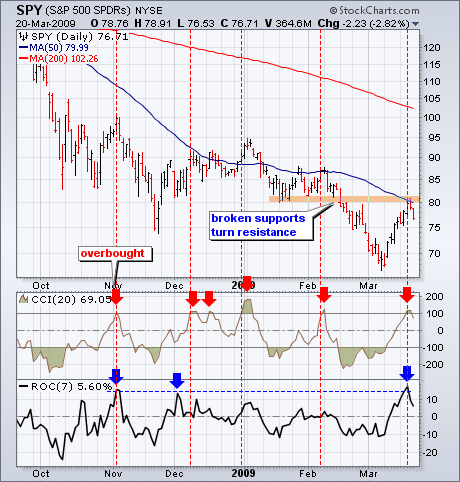 In addition to resistance, there were also signs that SPY was overbought. The bottom indicator shows the Commodity Channel Index (CCI) moving above 100 for the third time this year. The first two overbought readings marked the early January peak and the early February peak. Also notice that the 7-day Rate-of-Change surged above 17%. This was the biggest 7-day surge in over six months. While such a sharp advance shows strength, it also reflects overbought conditions.

Overbought conditions can be alleviated with a correction or consolidation. SPY could retrace 38-62% of the prior surge with a pullback or we could see a choppy trading range evolve to consolidate the gains. Either way, it looks like the market is ready for a rest after such impressive gains.