(Click here to see the beginning of this series.)

When identifying potential price patterns on a chart, it is crucial to try and verify that the market psychology behind the price pattern is really happening at that point on the chart.  One of the best ways to do that is to use volume to confirm things. 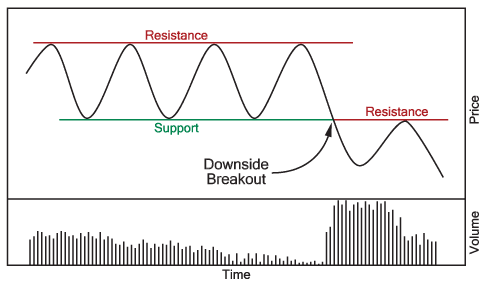 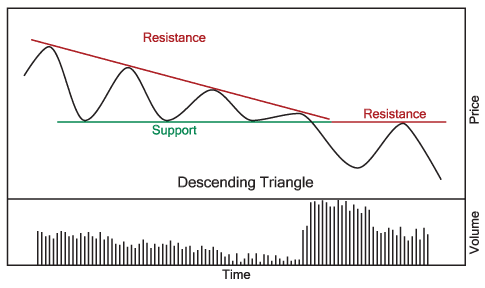 Triangle patterns should have a similar volume pattern - decreasing volume while the triangle is forming with a sharp increase in volume once a breakout is achieved.

Again, the diagrams above are idealized - the real-world is much messier.   Consider this example: 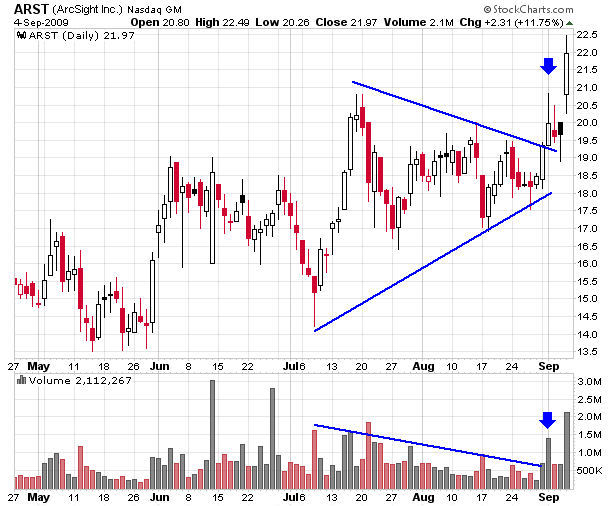 Notice that ARST didn't have a smooth decrease in volume but instead had several "mini-spikes" that corresponded to each change in direction of the "coil."  The key however is that each mini-spike was smaller than the previous one (with the exception of July 21st, but that was early in the coil's formation).  Once that downward volume trend was well established, a big spike above that trendline would signal the breakout - just like on September 1st.

So far, the two price patterns we've looked at - Rectangles and Triangles - are examples of "Consolidation Patterns" also known as "Continuation Patterns."  They are called that because, in general, after the pattern completes prices will usually continue whatever trend they were in prior to the pattern forming.  In order words, if prices were in an uptrend prior to a rectangle pattern forming, prices will usually resume the uptrend once the rectangle pattern finishes.  Basically, consolidation patterns are places where the bulls and the bears have another short-term "argument" about the stock, but it is a half-hearted one.  The "bigger picture" situation doesn't really change.

Next time, we'll look at the granddaddy of all reversal patterns - the Head and Shoulders reversal.