Click here to see the live version Click here to see the live version
×
It's very easy to get caught up in the euphoria of this market run.  I'd be careful to do that.  Invested Central turned from aggressively optimistic to cautiously bullish in early May and we've maintained that more cautious stance since.  Call us conservative if you'd like.  We view it as a compliment.  After all, if we don't protect our capital, who will?  Does anyone believe the folks on Wall Street have our personal best interests in mind?
As I've mentioned in recent articles, price/volume trends are bullish near-term.  That can be all you need to forge to higher levels.  But we cannot ignore some of the risks associated with the market.  I like to follow the equity only put call ratio ("EOPCR") as an indication of market sentiment.  Currently, the 60 day moving average of the EOPCR is at .59.  Since the CBOE began providing the data, this ratio's lowest 60 day level has been .56.  Low levels mark investor optimism and overconfidence and generally sends red flags flying high.  Take a look at the 6 year weekly chart of the S&P 500 (coming off of the 2000-2002 bear market).  I've plotted the two .56 readings that have occurred: 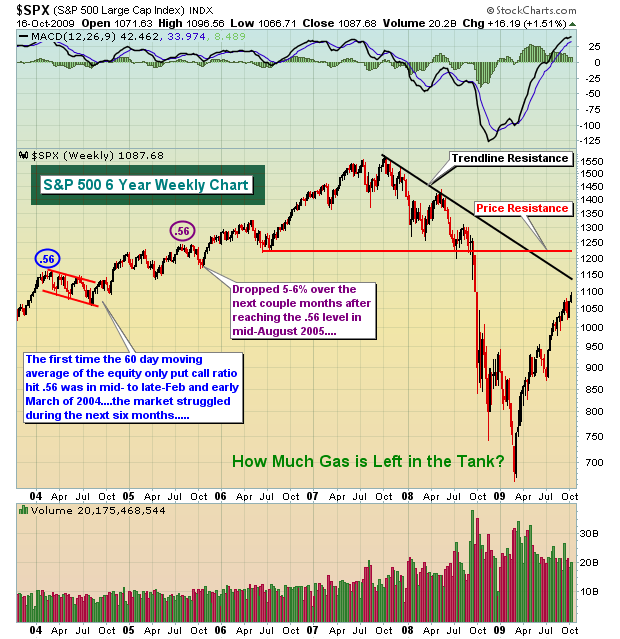 It's important to note that extreme levels of investor optimism doesn't have to send the market plummetting.  It USUALLY suggests that we've simply come too far too soon and that the market could use a pause, or breather if you will.  Those last two readings of .56 that were plotted above didn't have any long-term implications.  Rather, the market rested for awhile after complacency set in.  Once complacency was no longer an issue, the uptrend resumed.  We're still relatively optimistic and bullish the intermediate- to longer-term, though we have lines in the sand should the market begin to fall again.  Everyone should have their battle lines drawn.
We're not to that .56 level just yet, but getting closer.  For only the second time since the CBOE has been providing the equity only data, the DAILY equity only put call ratio has been at that .56 level for 10 consecutive days.  I do want to point out that it may take a few weeks of continued optimism for the equity only moving average to hit .56.  So we have to trade what we see.  That means continue thinking long for now with price/volume trends bullish.  If you're nervous about the market at current levels, taking a breather and sitting in cash is not a bad option.  The major point here and in my most recent articles is that while the market remains on a buy signal, we need to view the clouds on the horizon with caution.  There may be a storm brewing in the distance.
Happy trading!