The market has begun another correction, but so far no serious technical damage has been done. The S&P 500 remains within the grasp of an ascending wedge formation, the dominant feature on the daily chart. On Friday prices hit their lowest level of the correction, but they remained above the support of the 50-EMA and the rising trend line. Next major support is at the 200-EMA.

As regular readers know, it is most likely that prices will break down from the rising wedge pattern, and I am inclined to believe that will happen in this case. Internal conditions for the medium-term are neutral to slightly overbought, and I think the market needs to get medium-term oversold before the correction will end. Also, it is October, and a certain amount of ugliness should be expected. I hear that a number of people are expecting a crash, but I see no evidence that would make me anticipate anything more than a normal correction. 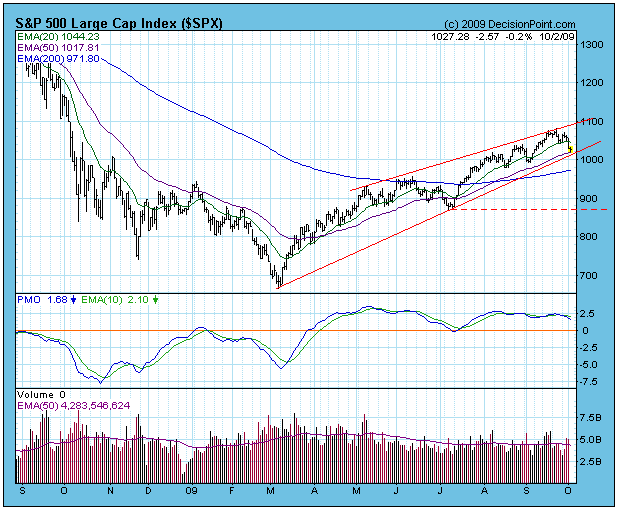 The following Participation Index (PI) chart shows that the short-term market condition is oversold. This could signal a short-term bounce, or the end of the correction. The latter is unlikely because the market needs to get more oversold medium-term before another up leg begins. 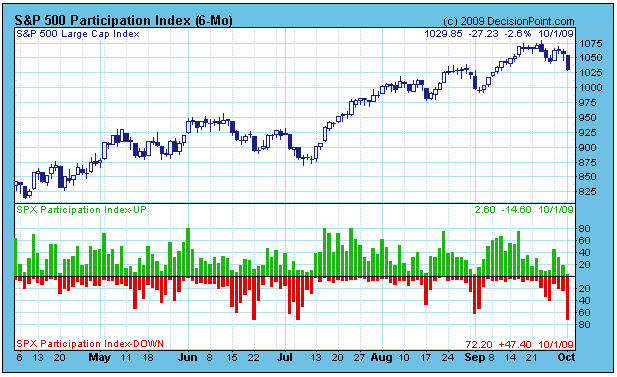 Bottom Line: It is very likely that the S&P 500 will break down out of the rising wedge pattern soon. With luck a breakdown will be followed by a healthy correction, but we are in a bull market and I wouldn't bet on anything worse than that.