One of the most common reversal patterns is the Head and Shoulders pattern.

This pattern forms in an uptrend and its completion marks a trend reversal.  The pattern contains three successive peaks with the middle peak (head) being the highest and the two outside peaks (shoulders) being lower.  The reaction lows of each peak can be connected to form line of support called a neckline. The top reversal pattern is completed when price breaks below the neckline. 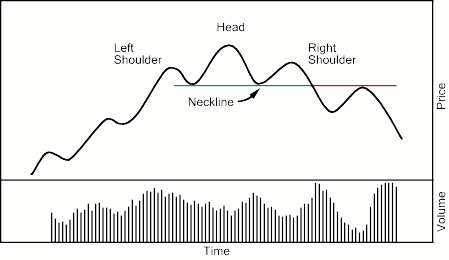 While it is preferable that the left and right shoulders be symmetrical, it is not an absolute requirement. They can be different widths as well as different heights.

It's important to realize that up until the point where prices move back below the level of the left shoulder, things look like a normal, ongoing uptrend.  It is only when the left shoulder's price level is violated that the bulls become fearful and the bears start to smell blood.  The right shoulder forms as the bulls try to reestablish the uptrend and then fail - usually because many of the more skittish investors will take profits at that point.

As the Head and Shoulders top reversal pattern unfolds, volume plays an important role in confirmation.  Buying volume (volume on up days) will slowly translate into selling volume (volume on down days) as the pattern develops.  This is seen when volume that previously expanded on rallies begins to expand on declines and contract on rallies. 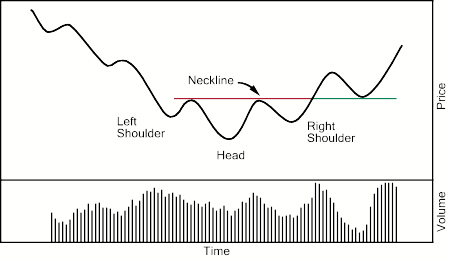 A couple of other comments about this pattern:

Many of the technical analysis books out there will go on to talk about several other kinds of reversal patterns - the rounding bottom, the V-reversal, double tops, triple bottoms, and others.  (We have many of them cataloged in our ChartSchool area.)  I'm going to tell you a secret - most of those are just variations of the Head and Shoulders reversal which didn't form "perfectly" for some reason.  For example, the triple top is a Head and Shoulders pattern where the head didn't go above the left shoulder.

The key point here is this - don't worry about what type of reversal is occurring.  Knowing that it's a triple top instead of a H&S top won't make you more money.  Focus on the fact that the chart is telling you that the fear/greed ratio is changing and react accordingly.

Next time, we'll look at the question "how much is too much?"