Click here to see the live version Click here to see the live version
×
The market is at a crossroads short-term.  We've been bouncing back and forth after that early May drubbing.   So is the rally ending or is it just starting?  Well, we can only look at the technical, sentiment and historical indicators and come up with a "highest probability" scenario.  Regardless of how you're approaching the market, you need to maintain a sense of skepticism and be prepared to acknowledge that your short-term call is incorrect.  So with so many questions unanswered, why is now the time to consider juiced ETFs?  It's simple.  We're at resistance levels across our major indices.  Juiced (or leveraged) ETFs are appropriate, in my view, in rare circumstances when the potential reward justifies the risk being taken.  I don't believe in them as an every day trading vehicle.  The odds are stacked against the trader who tries to call the market direction every day and who uses ETFs as a way to possibly profit from such calls.  Holding for more than one day can cause erosion in the price of both juiced longs and juiced shorts.  I've produced videos detailing the effects over time of holding onto these juiced ETFs and it makes little sense to hold over longer periods of time as the risk/reward strongly suggests you'll end up losing.

Let's look at the market technicals first by reviewing a chart of the QQQQ (ETF that tracks the NASDAQ 100 index): 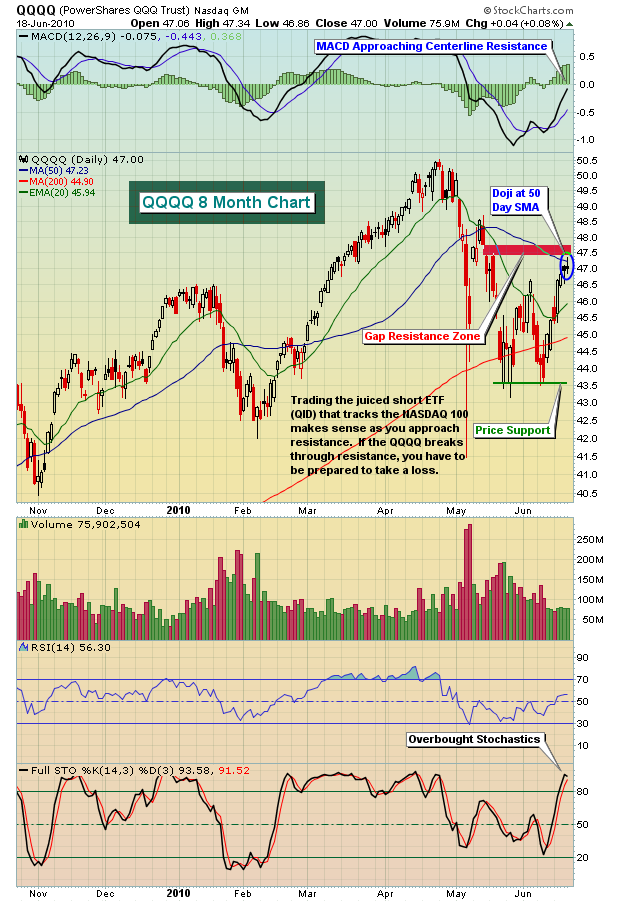 The reversing candlestick (doji) at resistance with stochastics in the 90s after the recent uptrend calls into question any further rally here.  Can the market continue this rally?  Absolutely.  But we're looking for highest probability.  The technicals suggest this could be an area where a reversal takes place.

On to sentiment.  In late April and early May, the VIX surged as fear grew and the major indices experienced a fall that was eerily reminiscent to September/October 2008.  Since that fall in the indices, however, the VIX has been drifting lower as investors have collected themselves and fear has been alleviated to some degree.  But on the chart below, the VIX has touched a key support level.  Check it out: 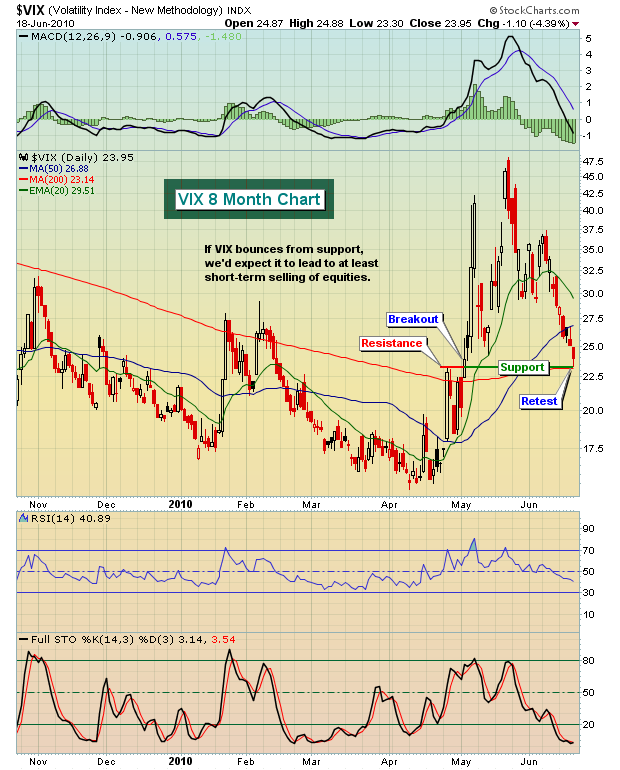 If the VIX bounces, even temporarily, it's likely to trigger more selling of equities in the near-term.  That's another short-term negative.

How about historically?  How do U.S. equities tend to perform in mid- to late-June?  Well, since 1950 on the S&P 500, the June 18th through June 26th period has yielded 45% of days that have closed higher than the previous day.  This compares to the "norm" throughout the year of 53%.  Clearly, the market's tendency is to trade more bearishly during this period.  Furthermore, the annualized return on the S&P 500 since 1950 during this period is -24.98%, a full 33 percentage points below the "norm" of 8.5% annual returns on the S&P 500.

Technicals suggest we are in an area where we could be topping.  Sentiment in the form of the VIX says we're at a level where the VIX could bounce, leading to weakness in equities.  And history tells us to be very careful this time of year.  The odds appear to be stacked against the bulls.  Therefore, trading a juiced ETF that moves inversely to the market might make sense here, with fairly tight stops in place of course in the event the recent bull rally marches on.

If you prefer to look at individual stocks, I used StockCharts scanning engine to produce a list of stocks that are likely to move lower if the overall market stumbles.  I recorded this as a very brief tutorial on setting up a simple scan searching for technically unhealthy stock candidates to short.  If you'd like to view this chat, CLICK HERE