(This is an excerpt from Friday's blog for Decision Point subscribers.)

As of 7/14/2010 the US Dollar has been on a Trend Model NEUTRAL signal, and it has been in a bear market since the end of September when the 50-EMA crossed down through the 200-EMA. On the daily chart below you can see that the index has been in a declining trend channel since the June top. When it hit the bottom of the channel in October, I thought it might bounce back up to the top of the channel, but QE2 killed that idea. 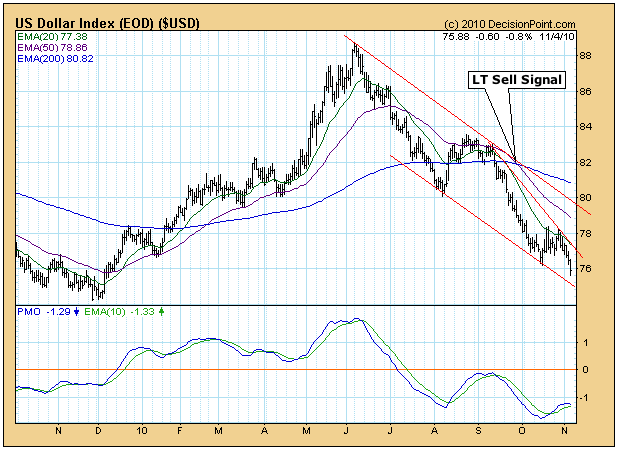 While the index remains above the bottom of the channel, the decline of the last two days has longer-term implications which are easy to see when we zoom back with a view of the weekly chart. The rising trend line drawn from the 2008 lows has been violated. Before we can say that the breakdown is decisive (unlikely to be reversed) the index would have to drop to about 74, but the fact that the most recent top formed well below the primary declining tops line tells me that the decline is accelerating. 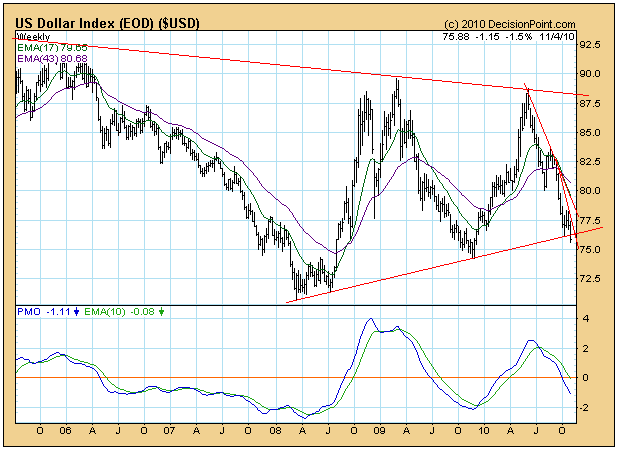 Finally, we zoom farther back using a monthly chart. You can see the line drawn down from the 2002 top (flag pole) with the triangle (pennant) attached to the bottom of it. I think this looks like a giant reverse pennant formation, and the implications are extremely bearish -- a downside projection of about 50 points. To me that sounds crazy, but so does what the Fed is doing. 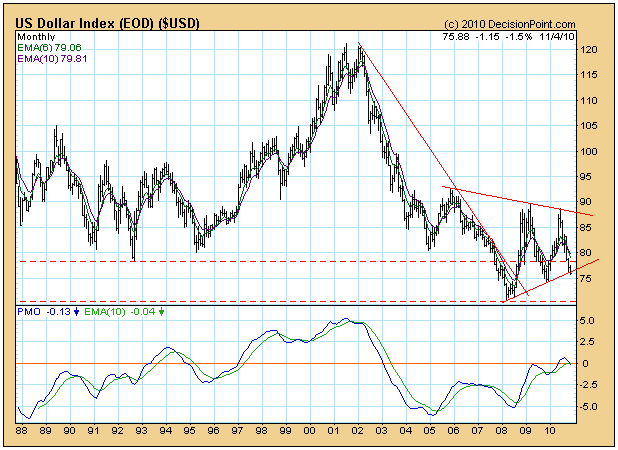 Bottom Line: Our mechanical Trend Model has us in a neutral stance on the dollar, but the charts are bearish. There is a slight chance that the breakdown from the long-term rising trend line could be reversed, but there is certainly no fundamental reason why this should happen. The Fed is determined to devalue the dollar, and I think, based on the technicals, that they will succeed beyond their wildest dreams.