The positive relationship between the Inflation Indexed Bond ETF (TIP) and the Gold SPDR (GLD) went through a rough patch in December-January, but got back on track the last two month. First, note that both remain in clear uptrends. The chart below shows TIP (red) and GLD (black) surging to new 52-week highs in October-November. Both then underwent corrections the next few months. GLD traced out a flat correction and bottomed in late January. TIP underwent a deep correction with a dip below its December low in mid February. Both resumed their positive relationship with a surge over the last two months. GLD hit a new all time high. TIP is close to breaking above its October-November highs. 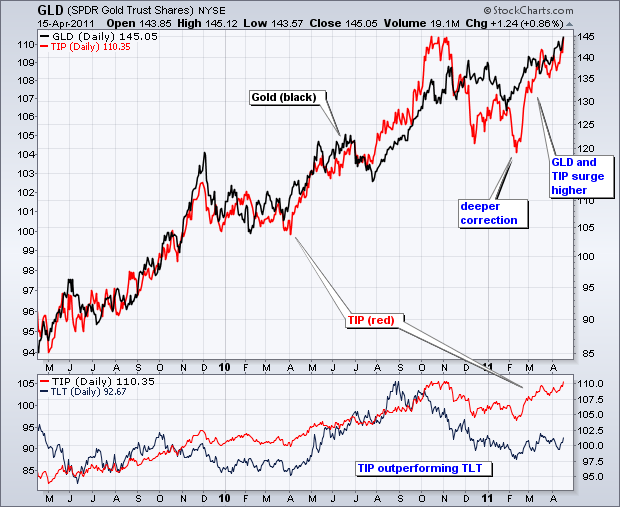 Strength in both suggests the presence of inflationary pressures in the market. GLD is viewed as a hedge against inflation. Even though bonds in general are not amenable to inflation, TIP provides a bond alternative that is hedged against inflation. The indicator window shows TIP (red) along with the 20+ year Bond ETF (TLT). Both put in lows in mid February, but TIP is already challenging its high and TLT remains well below its high. The inflation-indexed TIP is clearly outperforming non-hedged TLT.