At times, it is best to step back and take a longer-term viewpoint of the markets; and today we'll examine the Russell 2000 Small Caps (RUT). Quite simply, RUT has having difficulty moving past its all-time highs forged in October 2007; and in the process - have caused the major indicators to flash "caution" as the 9-month RSI hit above the 70-level, while the distance above the 30-month moving average rose to above 20%. In the past, these types of indicator readings have allowed for "mean reversion" lower processes to take place back to the 30-month moving average, while the RSI trades lower towards the 50-level. This would be a normal correction in a bull market; and it may be the "pause" that refreshes before the next leg higher unfolds. But make no mistake, a mean reversion exercise would mean nearly a -20% decline from current levels...very scary, but sufficient to put the bull back on firmer footing. 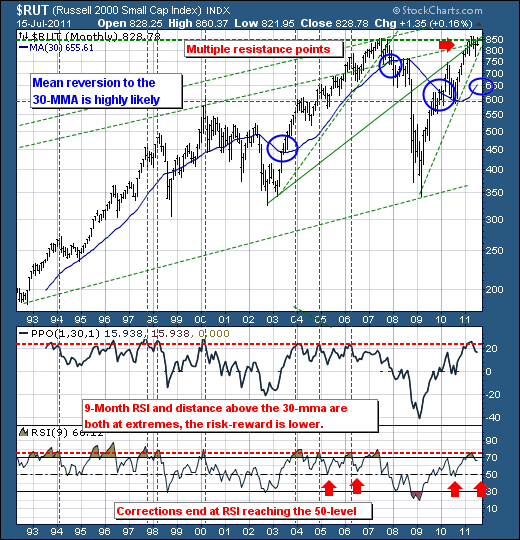