An impressive upside reversal day on Wednesday enabled the Power Shares US Dollar Index (UUP) to bounce off its 200-day moving average as shown in Chart 1 (see arrow). That dollar turnaround was apparently the result of Mr. Bernanke omitting any mention of QE3 in his testimony before Congress that day. That's dollar friendly since infusions of more money into the system resulting from Fed bond purchases weakens the dollar. At the same time, the European Central Bank (ECB) spent more than expected on the second round of its Long-Term Financing Operation (LTRO). LTRO involves three-year loans to European banks at 1%. That had the effect of weakening the Euro. The immediate reaction in all of the financial markets was fairly dramatic. Stocks sold off in the heaviest trading this year. U.S. bond yields jumped. [Fed buying of longer-dated bond maturities has kept yields unusually low]. The biggest gainer was the U.S. dollar. The biggest losers were precious metals. 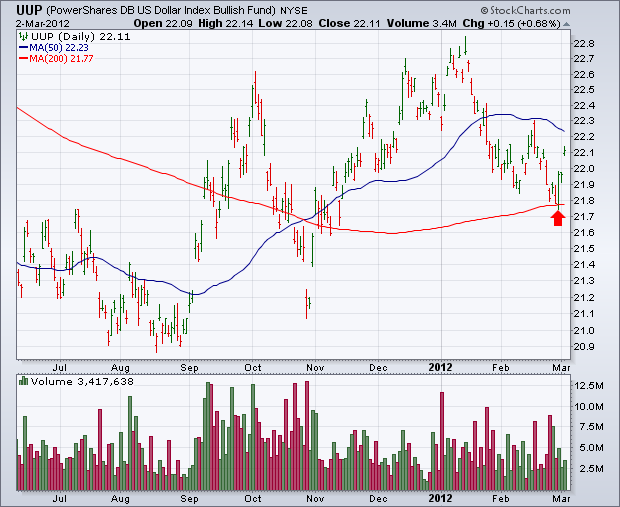