What really worries me about the direction of stocks is the possibility that foreign stock indexes could be tracing out two-year "head and shoulder" tops. That's true of both developed and emerging markets. Chart 1 shows EAFE iShares tracing out a textbook "H&S" top. [A head and shoulders top is identified by three peaks with the middle peak (the "head") higher than the two surrounding "shoulders"]. The fact that the two shoulders are about the same height adds to the symmetry of the pattern. The "neckline" is the trendline drawn under the 2010-2011 lows. A decisive violation of that support line is a very bearish sign. It now looks like the EAFE will retest that trendline (or its late 2011 low). That will a very important test, and hopefully will produce an oversold bounce of some type. Chartwatchers know, however, that the overall shape of the potential topping pattern since the start of 2010 calls for a lot more caution. The same is true of Emerging Market iShares in Chart 2. If those the late 2011 lows are broken, that would be a very bearish sign for global stocks. Given the tight correlation among global stocks, any breakdowns in foreign stocks would have a negative impact on U.S. stocks as well. 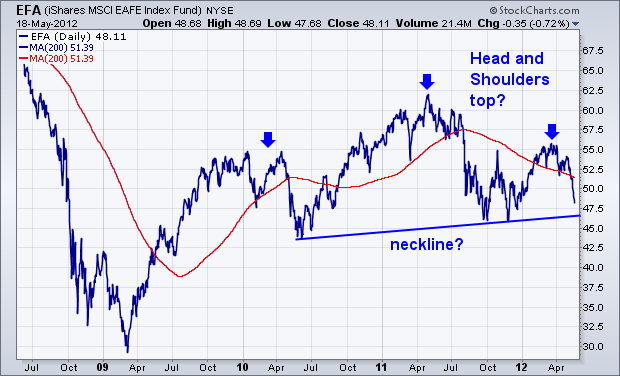 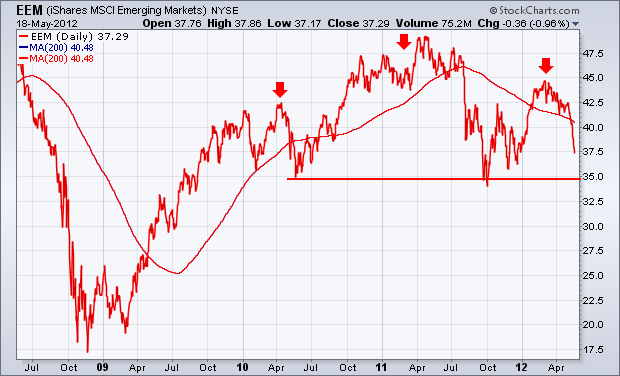