My Tuesday message expressed the view that if a stock correction were to start, this would be a logical spot for that to happen. That's because several market indexes are testing spring highs, which is a normal spot for chartwatchers to take some profits. I also warned that light volume during the latest price advance during August showed lack of bullish enthusiasm on the part of traders (who may be be paring their bullish bets as the market nears the dangerous month of September). Light volume during a price advance is a warning signal. The volume bars at the bottom of Chart 1 shows trading activity dropping noticeably during the second half of August. In addition to that visual comparison, there are a couple of volume indicators that show the same lack of strong upside buying pressure The best known is on balance volume (OBV). OBV is a cumulative measure of daily upside versus downside volume. When prices rise, that day's entire volume is added to the total. Volume is subtracted on down days. The OBV line and the stock index price should trend in the same direction. A danger signal is given if the OBV line lags too far behind (or actually starts to drop). Chart 1 compares the S&P 500 (bars) to the red OBV line since the start of the year. Both peaked together during March and bottomed during June (notice that the OBV line turned up first). Since that June bottom, however, the red OBV line has lagged far behind the S&P 500. That has created a "negative divergence" between the two. Chart 2 compares the two over the last 15 months. Notice that the red OBV line turned up first last August and preceded the S&P bottom by two months (rising trendline). The opposite is now happening. The falling trendline this summer shows that the OBV may start leading stocks lower. 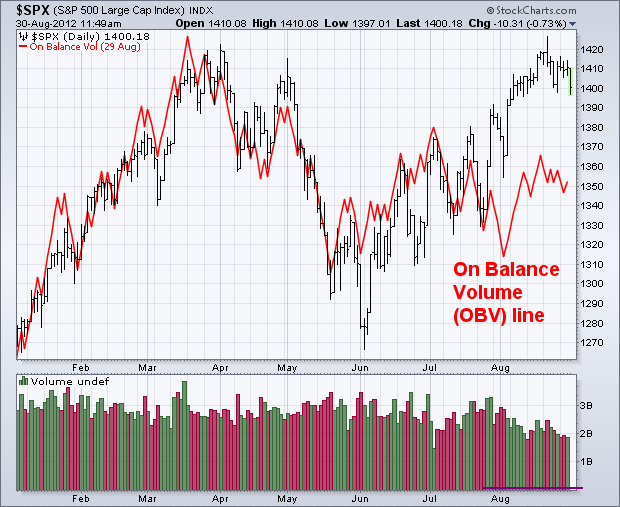 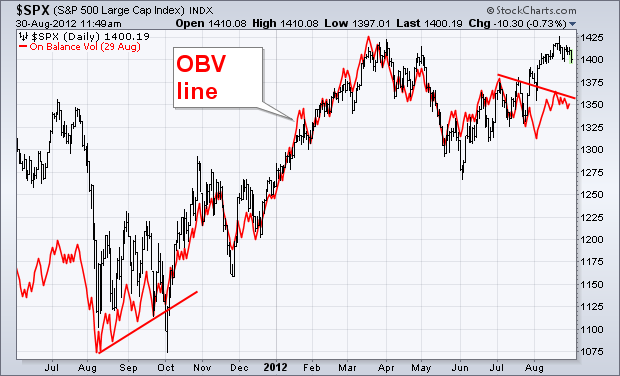