October has been a very strange month thus far.  While most of our sectors are trading close to the flat line for the month, financials and technology are heading in opposite directions.  I can't recall a two week period where the returns of these two influential sectors diverged by 8%, especially where one is performing with solid relative strength while the other completely falls apart.  Take a look at this chart: 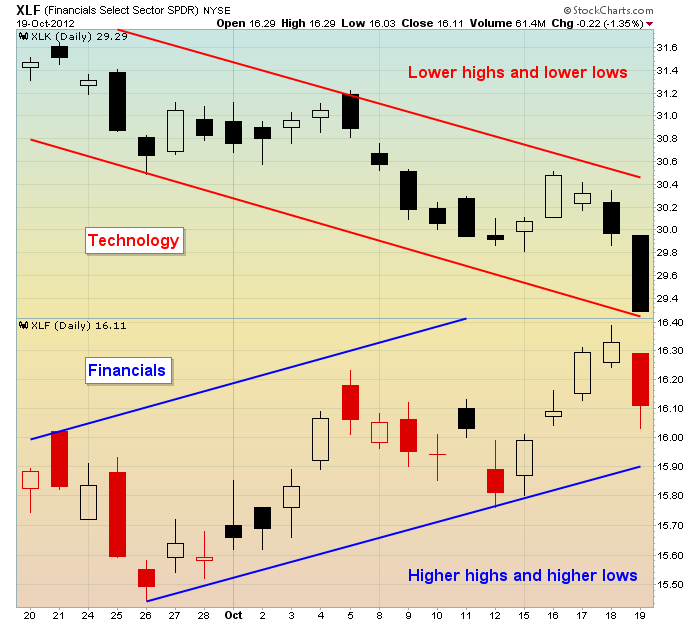 Could these two sectors be any more opposite one another?  These are both "risk on" sectors, so they tend to head in the same direction.  After just a couple weeks of earnings season, it appears as though banks are producing much better quarterly results and are being handsomely rewarded for it.  I love to see relative outperformance by financials in general and banks more specifically.  Having spent a portion of my career auditing banks, I know firsthand that expanding profits in the banking sector ultimately leads to more credit availability.  Credit is a key driver to growth in other sectors and industries.

I'm a student of history.  Normally, when the financial sector performs as well as or better than the S&P 500, equity prices overall rise.  That seems evident to me when looking at the following chart: 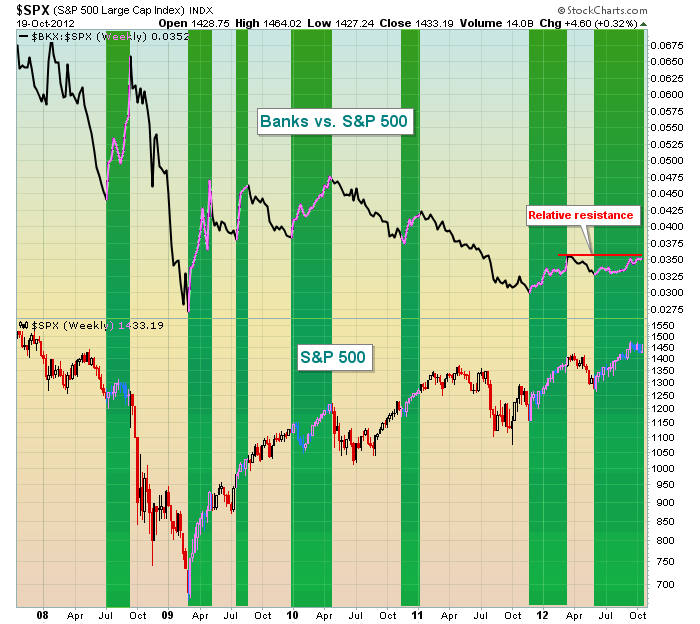 The green shaded areas represent periods of time when the Bank index ($BKX) is outperforming the S&P 500.  Rarely do we see the market decline during such periods.  As you can see from the above chart, the relative strength of banks is moving higher and the outperformance of financials these past two weeks should be thought of as a bullish sign.  That doesn't mean we won't see additional short-term selling, however.  In fact, the upcoming week is the most bearish week of the year historically, dating back to 1950 on the S&P 500.  We don't see lower prices every year, but some of our worst weekly declines have occurred during this week.  My reasoning?  By the time 3rd quarter earnings come out, you can't keep making excuses as the year is running out.  All the dirty laundry comes out for all to see.  We finished last week on a VERY rough note and much of it was due to earnings (or lack thereof).  A huge number of earnings will be released in the week ahead, so unless a major change takes place, we could see more of the same in terms of selling.

History does tend to repeat itself in the stock market and there are several historical rules I live by as a trader.  I'll be discussing them in a webinar on Tuesday, October 23, 2012.  If interested, CLICK HERE for more details.