January 2013 has rolled in, with the "fiscal cliff" solved for the moment; and now there are concerns "QE-4" will end sooner rather than later...and perhaps below 2013 ends. Collectively, the passing of the fiscal cliff and the new QE-4 concerns pushed 10-year note yields higher; however, given "QE-4" has begun, and the growing concerns over raising the US debt ceiling - all should contribute to pushing 10-year yields lower...in all probability to new lows below 1.394%. This is our opinion; and it is our opinion this should be the "final move", and prep the landscape for a generational low in yields. 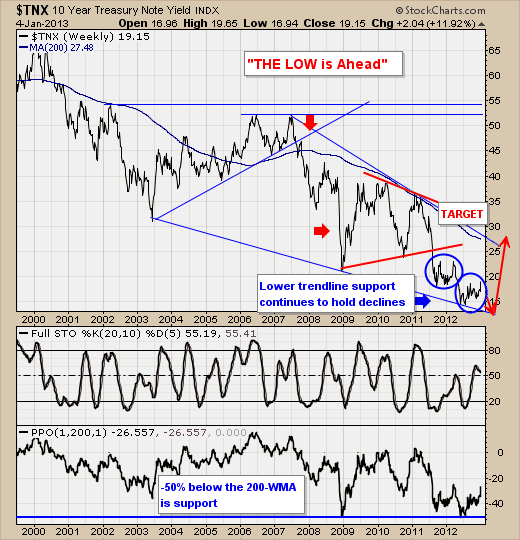 Technically speaking, the downtrend in 10-year yields remains in place, with the 20-week stochastic having turned lower from less-than-overbought levels. This failure should allow yields to move into lower trendline support, which at this point has three clear touches...thereby solidifying its importance as major support. Too, we should note that 10-year yields tend to bottom out at -50% below the 200-week moving average, which once new lows do print - should provide an upside mean reversion target in the future.

So, as we enter 2013 - perhaps one of the "biggest" trades on the technical landscape will see 10-year note yields finally rise on the order that everyone has expected over the past several years. It is an inevitability that prices will trade back above the 200-week moving average (a rare occurrence in the past 12-years); and our bet it that the move will begin somewhere towards the of 1Q or 2Q 2013. Be prepared.