Click here to see the live version Click here to see the live version
×
With a 150-point gain to end the week, the Dow Industrials closed above the next big number (14000) and hit a significant milestone. There is usually nothing special about round numbers, such as 14000, but this number is special because the Dow failed at 14000 in 2007. The financial crisis and subsequent swoon in financial stocks helped push the senior average below 7000 in early 2009. Friday's advance allowed the Dow to complete a six year round trip. What a long strange trip it's been. The chart below shows the Dow falling 50% and then requiring a 100% advance to make up for this decline. This is a great lesson for traders. In percentage terms, it always takes a bigger advance to make up for a loss. A decline from 100 to 80 is 20%, but it takes a 25% gain to back to 100 and make up for that loss. This is why risk management is so important. 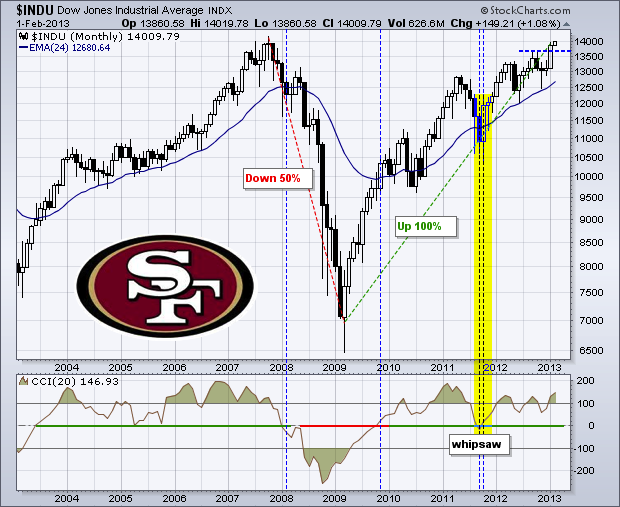 Speaking of risk, the Dow is short-term overbought after a 1000 point advance in five weeks. Nevertheless, the path of least resistance is up and I would consider the long-term trend bullish as long as the Dow holds its rising 24-month EMA and the Commodity Channel Index (CCI) remains in positive territory. As the vertical lines show, this combination has been pretty good at defining long-term trend changes over the last 10 years. Broken resistance in the 13650 area turns into the first support zone to watch on any pullback.