The US Congress came through at the 11th hour once again as many expected they would in opening the government and raising the debt ceiling, but only for a short while really. However, the decision to "kick the can down the road" is causing the US Dollar to experience a great deal of "indigestion." Our premise is that the current US government dysfunction is bearish for the USD from a fundamental point-of-view; and it is also backed up from a technical point-of-view. 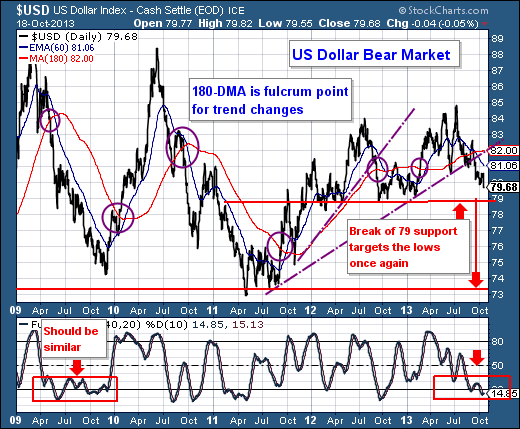 Technically speaking, the trend has turned bearish this summer when the USD broke below the 180-day moving average fulcrum point between bull and bear markets, and it has broken trendline support off the 2011 low. Thus, one should be sellers of the USD on rallies. However, the real "fireworks" if you will shall begin once the 78-to-79 zone is breached, for it has provided support to the USD since the beginning of 2012. A break of this zone would target the lows at 73-to-74, and perhaps even lower.

Our choice for shorting the USD is a long Swiss Franc position, for it has broken out of a longer-term "head & shoulders" bottom, and should lead all the currencies higher...including the Japanese yen. This is the price of continued government dysfunction...a loss of faith in the currency.