My Wednesday message showed the close correlation between weak emerging market currencies and emerging market stocks. It showed the WisdomTree Emerging Currency Fund (CEW) threatening to break an important support line. The green line in Chart 1 shows that happening. After falling sharply on Thursday and Friday, the CEW closed just below its 2012/2013 lows. While all emerging currencies tumbled, the most notable collapses took place in Turkey and South America. Argentina and Venezuela were hit especially hard, with the latter suffering a de facto currency devaluation. Why that poses a problem is because a close linkage exists between emerging market stocks and currencies (as well as bonds). Chart 1 shows that Emerging Market iShares (red line) track very close with emerging currencies. The 6-month Correlation Coefficient (below chart) has a positive correlation of .79. Emerging market bonds denominated in local currencies also fell sharply. The subsequent plunge in emerging market assets caused a high-volume selloff in developed stock markets all over the world and a flight to quality into American, German, and Japanese government bonds. Gold prices also jumped. Although the U.S. dollar bounced on Friday, most currency money went into Europe and Japan. A jump in the Japanese yen pushed Japanese stocks sharply lower. 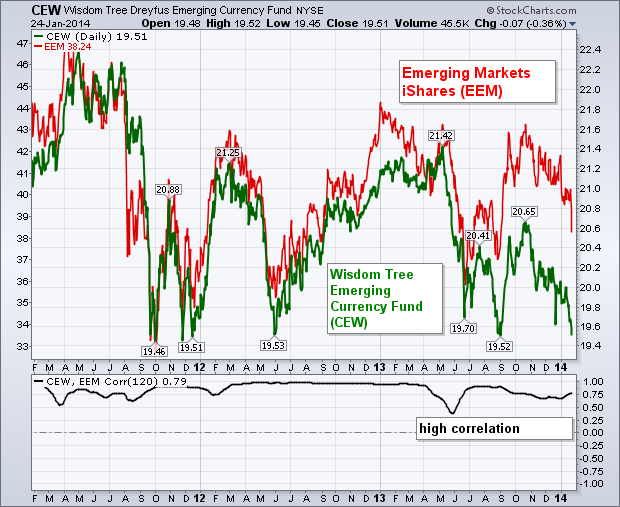 DROP IN CHINESE STOCKS DIDN'T HELP ... My Wednesday message suggested that emerging markets needed a stronger Chinese stock market to recover from their current slump. Unfortunately, they didn't get that help. Chart 2 shows China iShares (FXI) plunging nearly 5% on the week. In so doing, the FXI tumbled to a five-month low and ended below its 200-day moving average. News that China's manufacturing sector had slipped into a contraction mode had an especially negative effect on emerging markets that export to China (mainly in Asia and Latin America). China is the world's biggest emerging market and the world's second largest economy. What happens to that economy and stock market has a big effect on markets everywhere else. 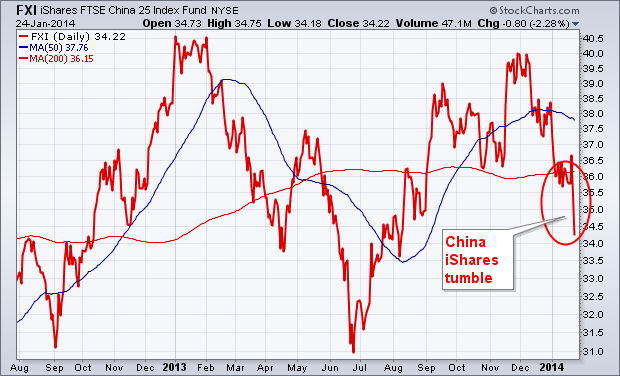