The Dow Diamonds (DIA) showed signs of a selling climax last week and forged an island reversal to end the week. First, let's look at the indicators to suggest that we had a selling climax or capitulation of sorts. A selling climax involves a very sharp decline with extremely high volume. Price-wise, DIA fell over 8% from high to low, 10-period RSI moved below 30 and the 10-day Slope indicator hit -1. These indicators confirm that DIA fell sharply in a short period of time. Volume-wise, the Volume Oscillator (5,100,1) surged above 100 and this means the 5-day average of volume was over twice the 100-day average. We can also see DIA volume exceeding the 15 million mark twice last week. In fact, Wednesday's surge to 25 million was the highest volume of the year. 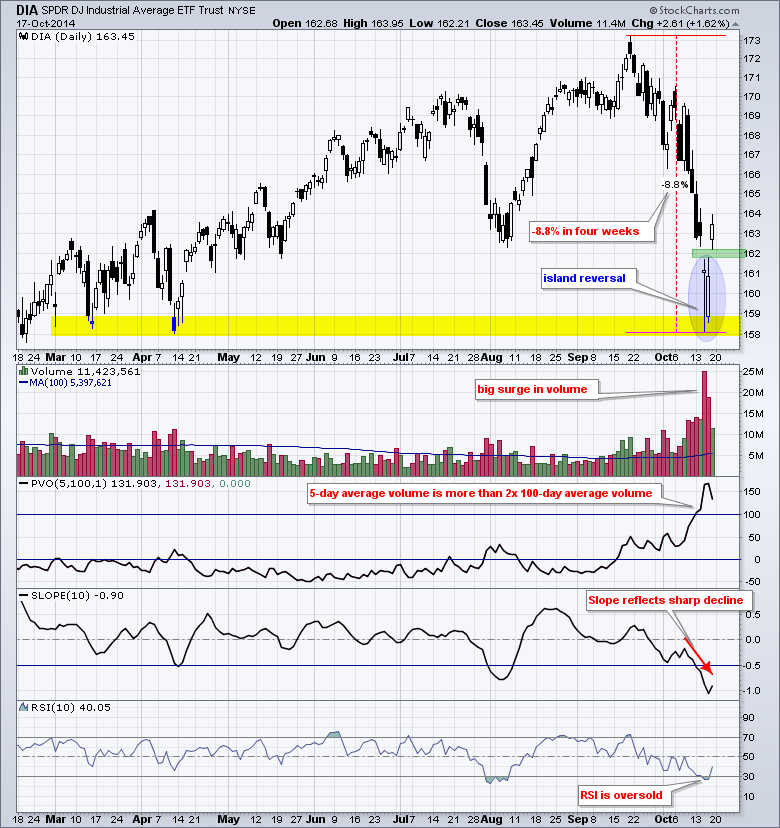 DIA followed up this selling climax with an island reversal over the last four days. The ETF gapped below 162 on Wednesday, traded below the gap for two days and then gapped above 162 on Friday. These gaps created a two-day price island that trapped shorts with losses. Also notice that this week's lows formed at support from the spring lows. So now what? Short-term, the island reversal is valid as long as the gap holds. After all, a strong reversal should hold. A move below 161.5 would fill the gap and negate this short-term reversal. We could then see a test of the lows in the 158-159 area. Keep in mind that this is a short-term outlook. Volatility remains high and the markets are in risk off mode overall.