Emerging market assets are suffering from the dual threat of rising U.S. interest rates and a stronger dollar. The most direct result is seen in EM currencies. The green line in Chart 9 shows the Wisdom Tree Emerging Currency Fund (CEW) falling to the lowest level in five years. [The CEW includes a basket of emerging currencies]. That's a side effect of a rising dollar and weakening commodity prices (especially in Brazil and Russia). That's important because weaker EM currencies usually coincide with weaker EM stocks. The red line in Chart 1 shows a correlation between Emerging Markets iShares (EEM) and the CEW (green line). The EEM itself is in danger of falling to the lowest level in two years. That may increase risk for global stocks in general. China also has a lot to do with EEM weakness. 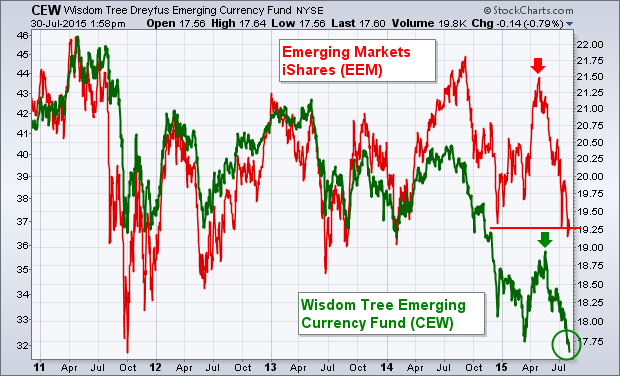 EMERGING MARKET ISHARES THREATEN SUPPORT... The weekly bars in Chart 2 show Emerging Markets iShares (EEM) in the bottom half of a trading range that started in 2011. The EEM is in danger of falling below last year's late intra-day low at 36.43 and a rising trendline extending back to 2011. That would be the first serious violation of chart support in four years. Plunging commodity prices are a big problem for EM countries that depend on commodity exports (which is made worse by a rising dollar). Rising Treasury yields also reduce the appeal of higher yielding (and riskier) EM assets. Emerging markets have underperformed developed markets for four years. That hasn't presented a major problem as long as the EEM has remained in a sideways trading range. Developed markets might not react as well to a breakdown in emerging market stocks. 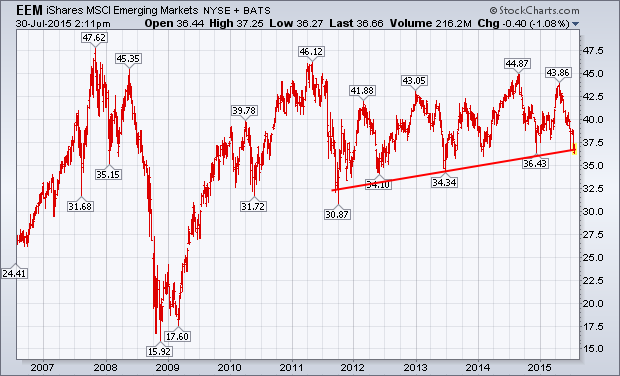