We have lots to talk about since our last newsletter!   For those of you who have been watching the "ChartWatchers LIVE" webinar, you know that for almost three months prior to the recent market collapse on August 19th, we had been expressing concerns over the market's slowing momentum and weakening breadth statistics.  Well, clearly, the collapse that occurred during the 19th thru the 24th was the "big change" that those indicators were pointing to.  The question since then has been and continues to be "Now what?"

The reality is that technical analysis cannot say a whole lot about what's coming next immediately after a big change like this.  All the trendlines are broken and all the indicators have signaled their signals.  And that is as it should be - the market needs time to establish its new direction and so why shouldn't the technical be any different?  It will take time for new trends to emerge and things like moving averages and other indicators to re-establish themselves.  Currently, any short/mid-term indicators that use data from before August 19th will give confusing signals because the mass psychology of the market was very different then versus now.  (Note: I'm generally talking about a one-week to three-month time horizon.  If your time horizon is long enough, this is just a bump in the road.)

It's also times like this that many of the less reputable chart techniques are dusted off and trotted out for the gullible to "enjoy."  Don't be fooled!  If a charting method isn't grounded in the mass psychology of the market - the battle between fear and greed that drives stock prices - then it is just a guess in sheep's clothing.  Caveat emptor!  My strong advice to everyone out there is to remain patient during this volatile time.  Wait for the technicals to settle down and come to you.  Trend and momentum will return to the market soon but until then, be very wary.

Keeping that warning in mind, one thing we can look at is the behavior of the S&P Sector Rotation PerfChart since the August collapse.  Check it out: 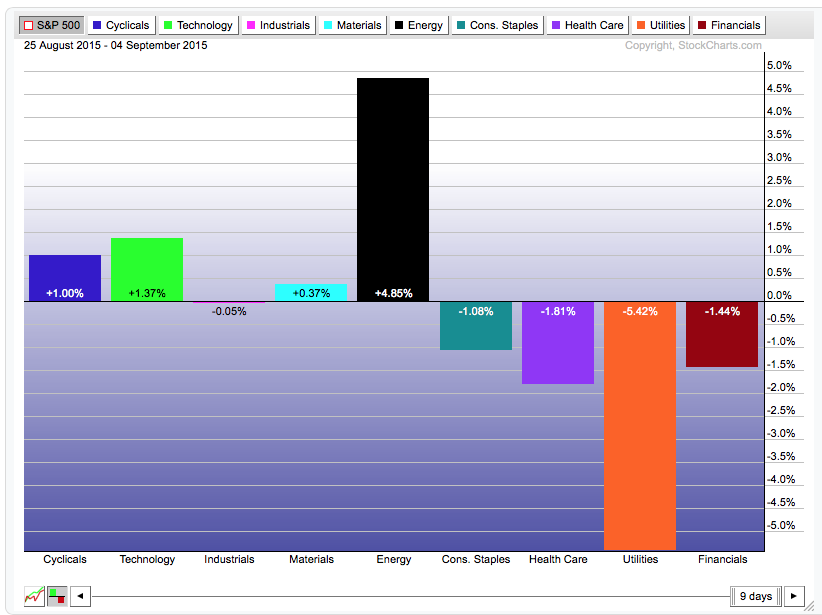 (Click the chart for a live version although, as time marches on, you will need to reset the start date to "25 August" by dragging the left side of the slider to the left with your mouse.)

This shows the performance of the nine S&P Sector ETFs relative to the performance of the S&P 500 index itself.  The "offensive" sectors are on the left and the "defensive" sectors are on the right.  Prior to the August collapse, the defensive sectors were outperforming the S&P and the offensive sectors were underperforming.  That indicated that the market was pessimistic about future economic growth and reluctant to put lots of money into the stock market as a whole.  In the 9 days since the bottom, things seem to have changed significantly with the "defensive sectors" underperforming the S&P and offensive sectors like Cyclicals and Technology outperforming the market.

Now, clearly, there are two sectors that stand out on this chart - Energy and Utilities.  Both of those sectors have special qualities that make me somewhat discount their contribution to the rotation picture however.  Energy had been in a 12-month downtrend prior to August and was begging for any excuse it could find to move higher.  Utilities, of course, is a proxy for the Bond market and whenever stocks are rebounding, Utilities (AKA Bonds) will suffer.  (There could also be a double whammy effect because the strength in energy stocks may mean higher energy prices ahead which is also bad for utilities.)

So in my mind, I'm shrinking the black and orange bars somewhat so that I'm left will a picture of weakness in the defensive sectors and strength on the offensive side of the board.  Sounds promising, yes?   Well... again, this is only based on 9 trading days of data.  No farms should be bet based on this data quite yet.  Still, it is worth watching carefully.  If Cyclicals and especially Technology stocks continue to lead the market back, then the "collapse" in August will be just what the doctor ordered.

P.S. Be sure to watch our next "ChartWatchers LIVE!" webinar this coming Saturday, September 12th at 1pm Eastern when my special guest will once again be Sir John Murphy!  Click here to register.