If you go to our DP Reports blog and take a gander at the DecisionPoint Market/Sector Summary, you'll find there are only two sectors left with BUY signals. I'll give you a moment to guess which ones. Those of you familiar with John Murphy's sector rotation analysis will likely guess correctly. Both the Utilities and Consumer Staples cap-weighted and equal-weight ETFs are on BUY signals. An Intermediate-Term Trend Model BUY signal is generated when the 20-EMA crosses above the 50-EMA. Unfortunately, three of those ETFs have declining 20/50-EMAs. Let's look at the charts to determine if those signals will hold up much longer given the overall market malaise.

The Utilities SPDR (XLU) has the best daily chart of the four. All of the EMAs are configured positively and the 20/50-EMAs are rising which should keep the BUY signal in place for some time. Price has been in a rising trend channel that unfortunately was penetrated on Friday's decline. The Price Momentum Oscillator (PMO) has decelerated but it is still rising and isn't that overbought. The OBV suggests some serious weakness as it has been declining in a negative divergence with price's rising trend. While this is one of the stronger sectors, there are still signs of trouble. 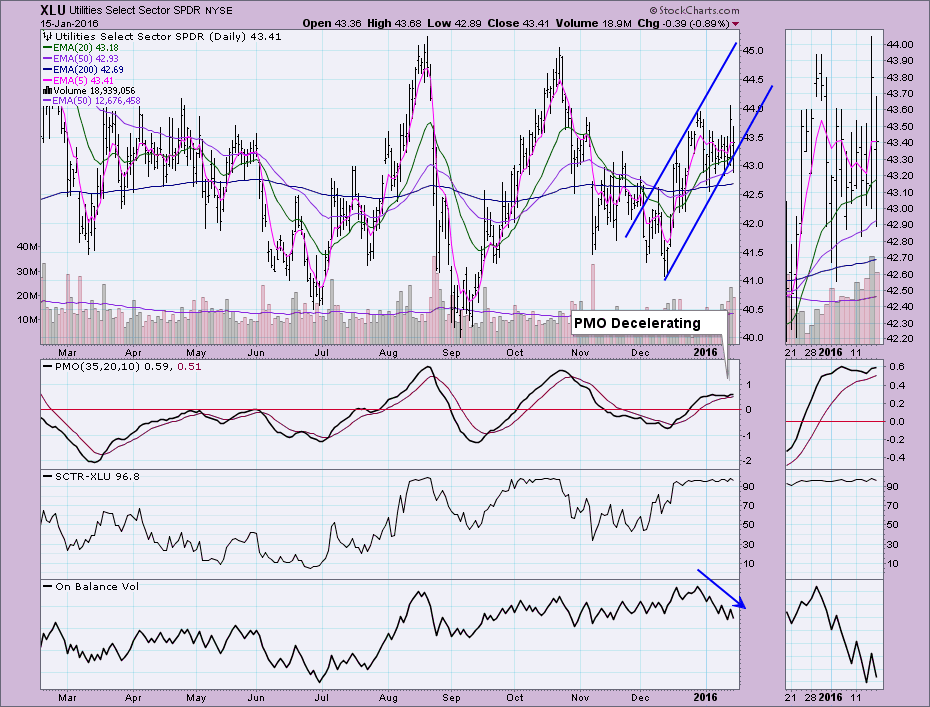 The equal-weight Consumer Staples ETF (RYU) has not been fairing as well. Price has been in a declining trend and the 20-EMA is working its way down toward the 50-EMA which would negate the current Intermediate-Term Trend Model BUY signal. The PMO just topped below its signal line which is very bearish. Price could find support at the December low. 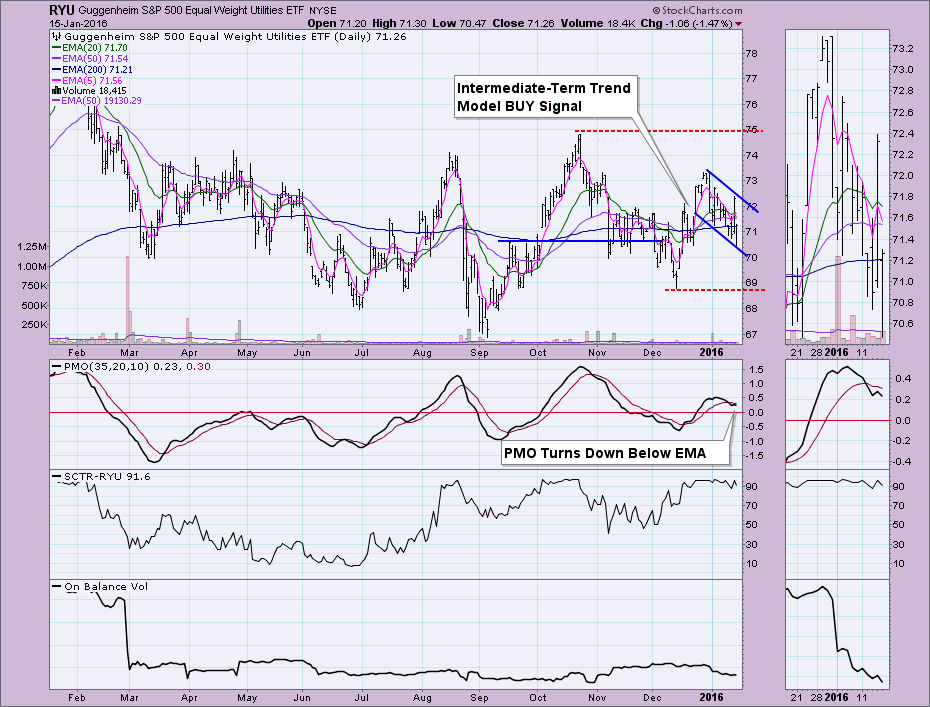 The Consumer Staples SPDR (XLP) has been dropping since reaching its high at the end of December. The rising bottoms trend line was broken on Friday and the 20-EMA is likely going to have a negative crossover the 50-EMA next week barring a major rally that would bring price above the 50-EMA. You could make a case for a double-top formation which would suggest a drop below the November low. The PMO is dropping and is now below the zero line. Notice the SCTR value is beginning to deteriorate as well. 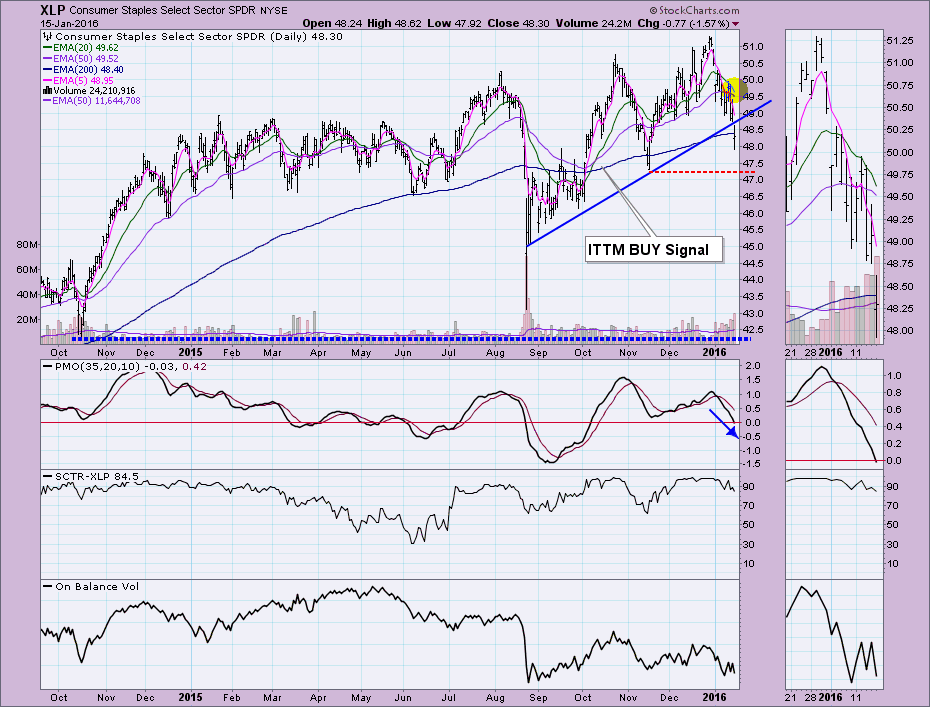 The equal-weight Consumer Staples ETF (RHS) is also trying to lose its ITTM BUY signal as the 20-EMA reaches toward the 50-EMA. Price gapped down on Friday nearing November low. Momentum has been negative for some time as the PMO has fallen down to neutral territory. The SCTR value is beginning to deteriorate. Friday's volume was minimal on the gap down which could be considered somewhat positive. 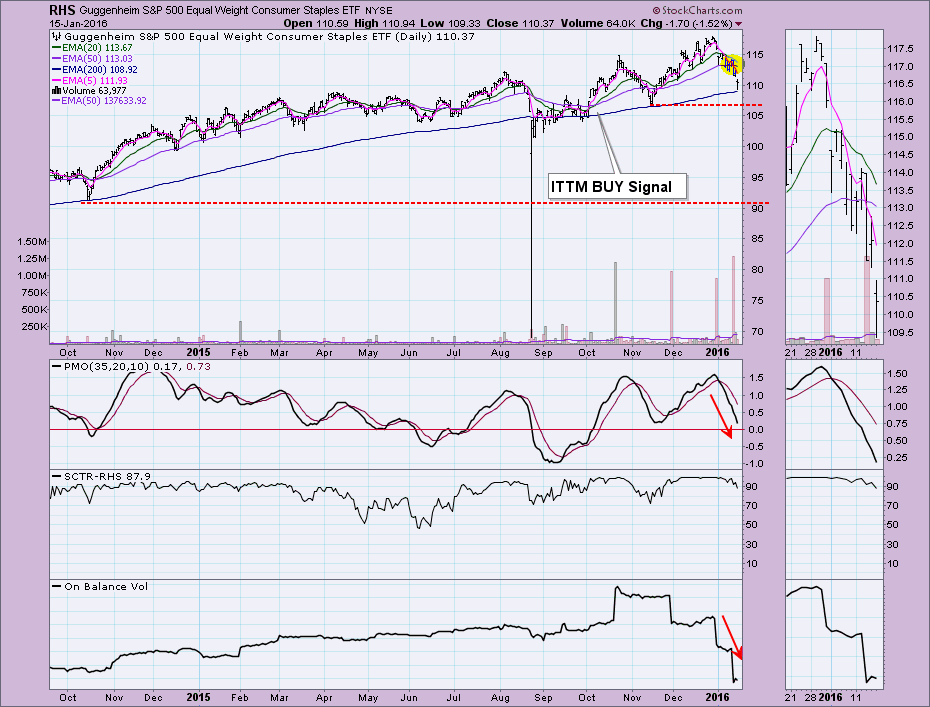 Conclusion: Certain sectors tend to do much better in bear markets than others and Consumer Staples and Utilities are in that group. However, they are beginning to show some weakness which could be indicative a possible market bounce or at least a pause in the current downtrend.