It was "back to the future" time for the markets this week with the Dow falling over 350 points and ending up just below 16,000.  This has caused lots of consternation and teeth-gnashing in the mainstream financial press, but let's back up and get some technical perspective before drawing conclusions.  Here's my chart of the current big picture: 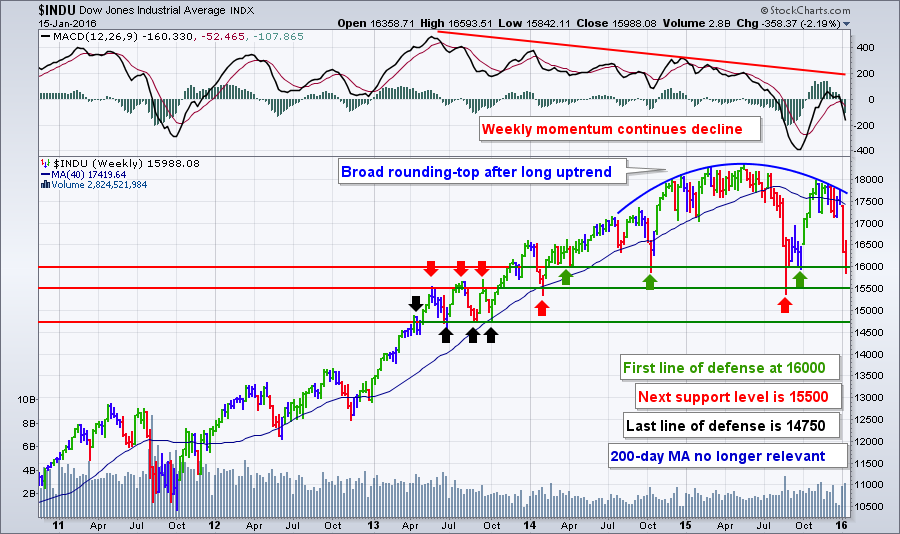 This is this same chart I featured during last week's webinar.  (So far, I haven't needed to update the annotations either!)  There's a lot of stuff going on here so let's break it down:

Even though the market headed lower last week, that doesn't mean that there weren't any opportunities for the bulls.  Our Sector Rotation PerfChart (below) shows you exactly where those opportunities were: 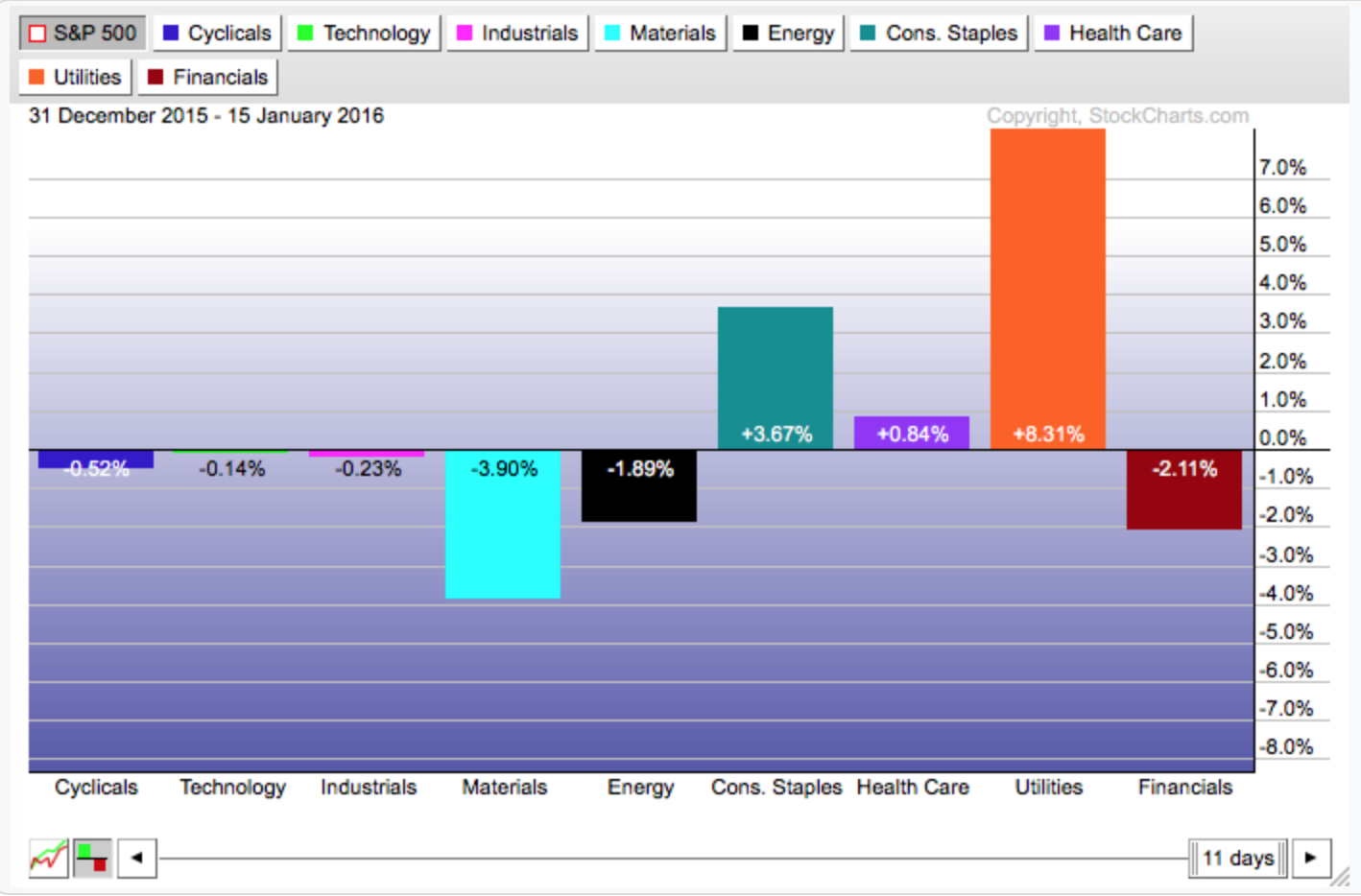 This chart says that since the start of the year, three sectors - Consumer Staples, Health Care, and Utilities - have out-performed the S&P 500.  Since those are key defensive sectors, we should expect the market overall to keep moving lower in the near term.

Note that the chart above doesn't show the entire picture however because the S&P itself has been heading lower too.  Let's see this chart using absolute performance instead of performance relative to $SPX.  By clicking on the grey "S&P 500" box in the upper left corner of that chart, we get the absolute picture: 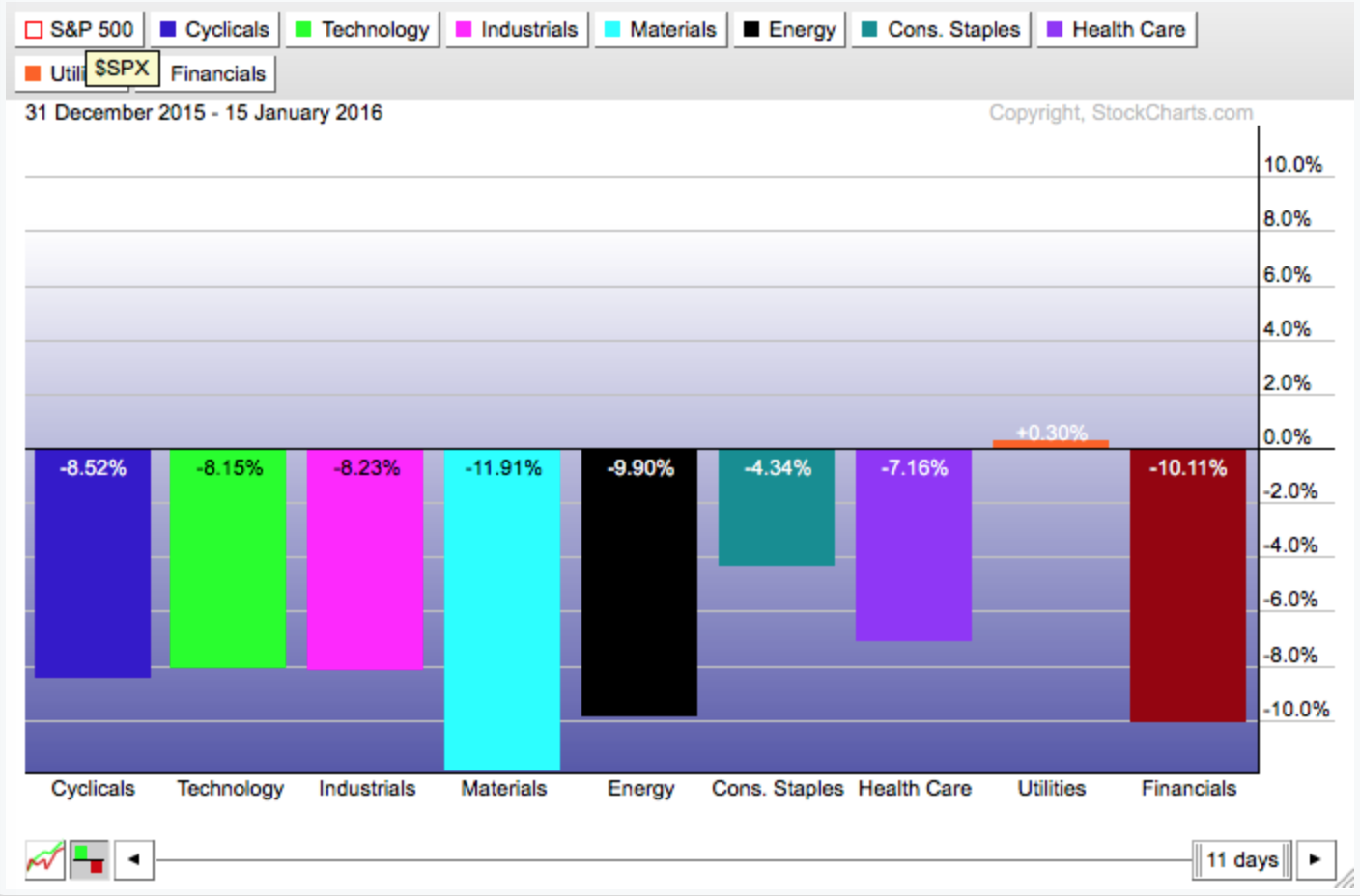 Hmm... That's kind of depressing.  We now see that only the Utilities sector (which is a proxy for the Bond market i.e., the "anti-stock market" sector) has shown a gain in January.  If you need to buy stocks right now, Utilities (and possibly Staples and Health Care) are the stocks to look at.

Clearly now is a time for caution.  In reality, the charts have been negative since early 2015.  That said, now is not the time to "tune out."  As the market declines, technical analysis becomes more and more important.  As I demonstrated above, charts can show you where previous support levels are located and technical indicators can tell you if those levels will hold or not.  The expression "Wall Street is on sale" is becoming more true every day as stocks decline.  Use charting to help you discover when the sale is ending.

P.S. Don't think there are any bullish charts out there right now?  Check out Campbell Soup which was returned by my "Strengthening Strength" scan.  (See last week's webinar for details on that scan.)  No promises, but it is still doing well and is in one of the key defensive sectors (Staples) this is doing relatively well right now.  Something to keep an eye on.