Let's get this out of the way first. If you've been watching business TV, all they've been talking about is the Dow nearing the 20,000 level. Much to their dismay, it came close on Friday but couldn't make it. The Dow touched 19999.63 before backing off. Historically, big round numbers have acted as magnets during market advances. At the same time, traders are often programmed to take some profits as that big number is approached. The hourly bars in Chart 1 shows how close the Dow Industrials came to the 20K level a couple of times over the last month. Technically, the Dow is still in an over-extended condition which explains why it's been moving sideways for the past three weeks. That's not unusual with a market working off a short-term overbought condition. Odds still favor resumption of its uptrend. The bigger market story this week, however, was the stronger action in the Nasdaq market. The Nasdaq closed in record territory on Friday. A rebound in biotechs helped. But most of the buying came from technology stocks, especially those tied to the Internet. It looks like FANG stocks are back in favor. 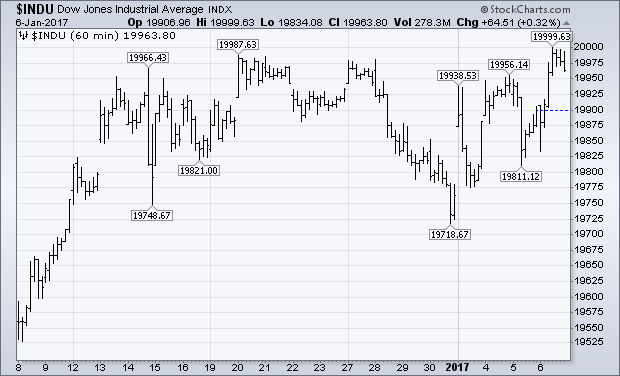 One of the factors keeping the rally going is that when a leading group stalls (like financials), new money moves into lagging groups like technology (and, to a lesser extent, healthcare). The daily bars in Chart 2 show the Nasdaq Composite Index closing at a new record on Friday. The Nasdaq was the strongest market index for the day and for the week. The Nasdaq has several things working in its favor. First, it's the only major stock index that hasn't reached overbought territory. The 14-day RSI line (top of chart) has remained below the overbought threshold of 70 throughout the recent rally (unlike the Dow and S&P 500 which exceeded that level). Secondly, the Nasdaq has been a market laggard. The solid line in Chart 2 shows the Nasdaq/S&P 500 ratio just starting to turn up after dropping during November. You may recall the post-election rotation out of growth stocks (mainly technology) and into value stocks (like financials) as the market jumped. It now looks like like money is starting to flow back into cheaper technology stocks. 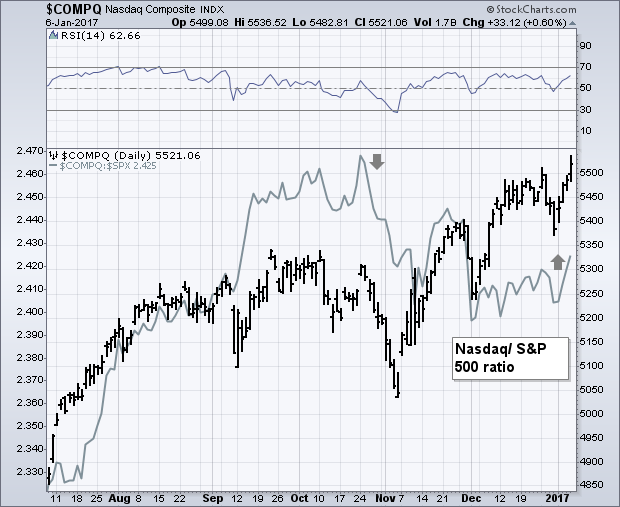