At its most basic, a trend line is a line that connects a series of rising troughs or falling peaks. A rising trend line slopes up and reflects the rate-of-ascent based on the higher troughs. Thinking back to junior high math, this is simply the rise over the run. The steeper the upward slope, the faster the advance. A falling trend line slopes down and reflects the rate-of-descent based on the lower peaks. The steeper the downward slope, the faster the decline.

It takes a least two points to draw a trend line. Traditional technical analysis teaches us that validity increases along with the number of touches. As with all technical tools, trend lines are sometimes great at identifying trend changes, and sometimes not. The chart below shows Apple breaking a trend line that was touched at least four times. The sharp break certainly looked convincing at the time, but the stock bottomed soon after the break and moved to new highs.

The next example shows Agilent with a bullish trend line break that held and signaled the start of an extended advance. After a 40+ percent advance, the stock broke the green trend line in late July. This break, however, did not last long as the stock quickly recovered and move to a new high. 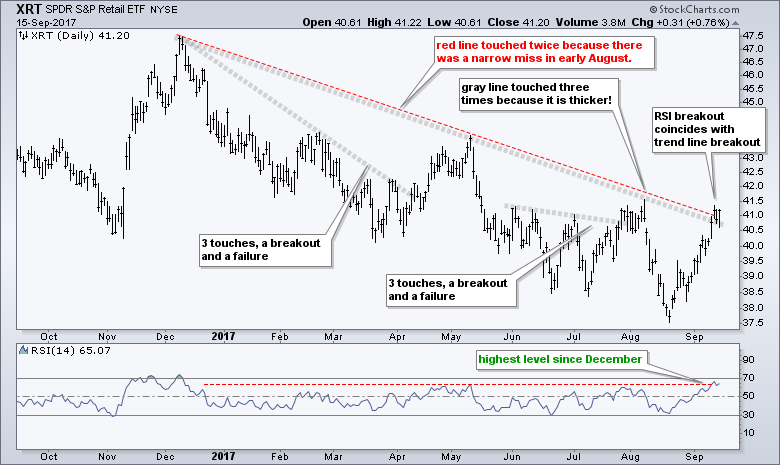 The indicator window shows 14-day RSI breaking to its highest level of the year this past week. Notice that this breakout coincides with a trend line break. The slope of this trend line measures the rate-of-descent, which is a form of momentum. RSI also measures momentum and the advance over the last four weeks achieved a momentum breakout. Notice that RSI hit its highest level of the year. This is also true for XLE and XES. A momentum breakout and trend line break, however, are not the same as a trend reversal. In other words, XRT has not moved from downtrend to uptrend. All we have seen is a change in downward momentum based on the lower highs that make up the trend line. The trend is still down because XRT hit a new low in August and has yet to take out the early August high. An uptrend requires a higher low AND a higher high so XRT has more work to do.