The direction of currency markets tells us a lot about the relative strength (or weakness) of global markets. As a rule, stronger economies have stronger currencies, while weaker economies have weaker currencies. As a result, the direction of the U.S. dollar tells us whether to favor U.S. stocks or foreign stocks. Generally speaking, a weaker dollar favors investments in foreign stocks. The green line in the chart below shows the Dollar Index (UUP) falling since the start of 2017 to the lowest level in three years. During that time, global stocks rallied. But foreign stocks rose faster. That can be seen by the rising blue line which is a relative strength ratio of the Vanguard All-World ex-US ETF (VEU) divided by the S&P 500. That line turned up at the start of 2017 when the dollar peaked. After pulling back during the fourth quarter of last year (as the dollar bounced), the ratio is rising again as the dollar has dropped to a new low. The VEU includes both developed and emerging foreign stocks. Since the start of 2017, the VEU has gained 34% versus 25% gain in the S&P 500. 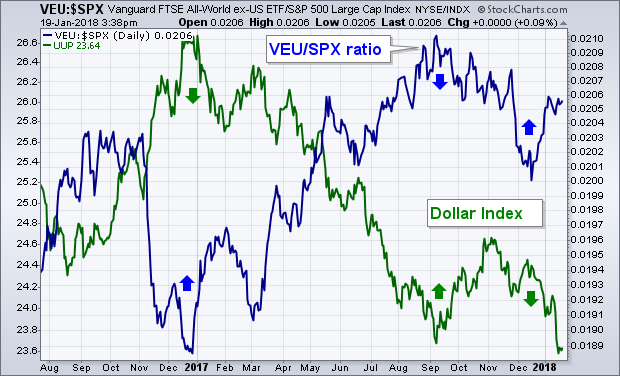 In the current environment, Americans get a dual benefit from investing abroad. One is that they benefit from rising foreign shares which are considered to be less expensive than in the U.S. The other is that they also benefit from rising foreign currencies. The biggest benefits over the last year have been in emerging markets and Europe. A basket of emerging market currencies gained 13% over the last year which contributed to a 46% gain in Emerging Markets iShares (EEM). Like all foreign stock ETFs, the EEM is quoted in dollars and gets an added boost when the dollar is down. In Europe, the euro and British pound gained 16% and 12% respectively, which helped their stock ETFs outperform their local stock benchmarks. The blue line in the next chart is a ratio of Germany iShares (EWG) divided by the DAX Index. The red line is a ratio of UK iShares (EWU) divided by the FTSE Index. Since the start of 2017, Germany iShares outpaced the DAX by 20%. That was mainly due to a 16% gain in the euro. UK iShares outpaced the FTSE by 18%. That was largely due to a 12% jump in the pound. And that was mainly due to a falling dollar (green area). Which demonstrates that foreign stock ETFs are one of the best ways to benefit from rising foreign stocks and a falling dollar. 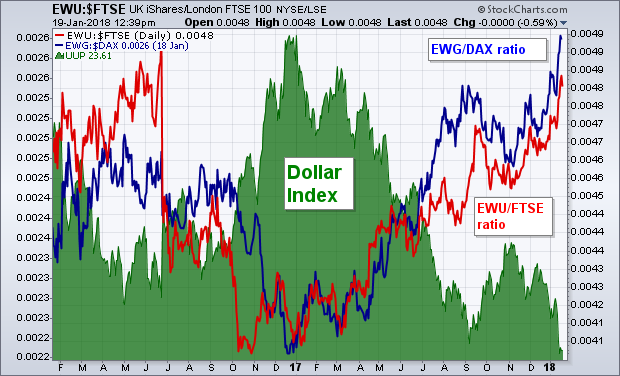