Editors Note: This article was originally published in John Murphy's Market Message on Thursday, June 14th at 11:39am EST.

The Fed raised its short-term rate by a quarter point yesterday as expected. But it also added a fourth rate hike this year which gave its announcement a more hawkish tilt. That had the immediate effect of boosting Treasury bond yields and weakening bond proxies like utilities and REITS. Bank stocks, however, ended in the red after an early bounce. And stock indexes lost a little ground. A dollar bounce also faded by day's end. Some of those reactions to the Fed are being offset today by dovish comments from Europe. The ECB will end its bond buying program by the end of this year. What apparently caught the market's attention, however, was its plan to keep rates unchanged until at least the middle of 2019. That had the immediate effect of pushing the euro lower against the dollar. Chart 1 shows the euro falling more than 1% today and nearing a possible retest of its late May low. Eurozone bond yields also dropped which, in turn, are pulling Treasury yields lower today. That may also explain today's buying of gold. European stocks rallied on that dovish announcement. Stocks in the states are mixed today. 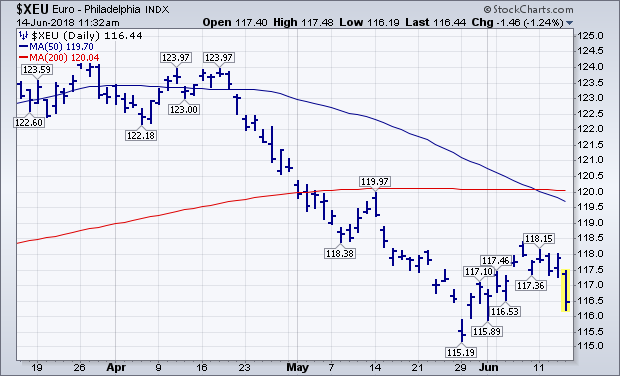