The monthly bars in Chart 1 shows the 10-Year Treasury Yield ($TNX) forming a major bottoming pattern that started six years ago (2012). Its monthly MACD lines (bottom box) are at the most positive reading in ten years. That favors an eventual upside breakout. [A decisive upside breakout would also break a falling trendline going back more than three decades]. Since May, however, the TNX has been pulling back. The chart below shows one of the reasons why. The green line shows the 10-Year Treasury yield peaking at 3.11% in mid-May and trading lower since then. The blue and red lines, however, have fallen a lot more. They represent the ten-year yields for Germany (blue line) and the UK (red line). Lower foreign yields usually have a depressing influence on Treasury yields. Part of the reason is that higher Treasury yields attract foreign money which boosts bond prices and pulls yields lower. Over the last month, for example, the 10-Year Treasury has gained 5 basis points. At the same time, German yields have dropped -1 basis point, while the UK yield has dropped -7 bps. The Canadian ten-year yield has remained flat. That also explains why those currencies have weakened against the dollar. Chart 2 also suggests that an upside breakout by Treasury yields may depend on foreign yields moving higher as well. 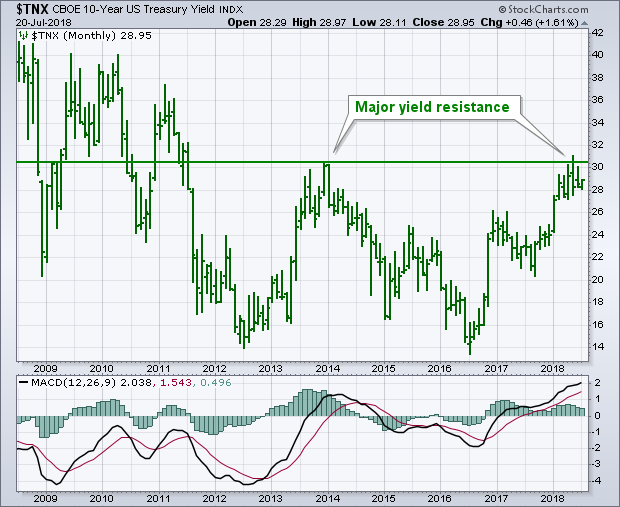 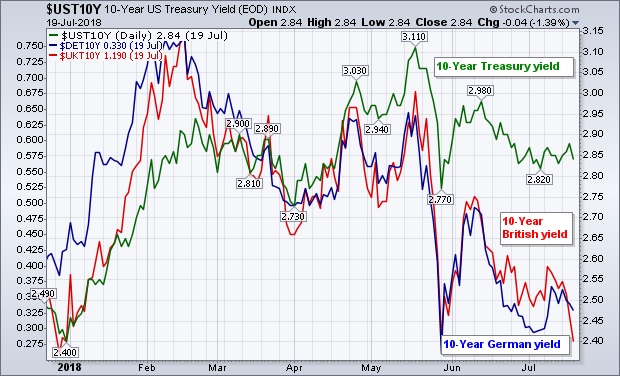