I'm not a fan of buying (or short selling) stocks and holding them into quarterly earnings reports.  It's simply too difficult to manage risk.  Yes, there are options strategies that you can employ to reduce risk so we could debate back and forth the merits of holding stocks into earnings.  For me, though, it's just not something I'm comfortable doing.  I'd much rather trade a stock after its earnings report is in the rear view mirror so I can eliminate one major risk factor.

Having said that, I know many of you do like to anticipate positive or negative earnings and trade stocks into their earnings because of the potential quick reward, so this article is for you.

We've already seen thousands of companies present their latest "report cards", but many still will be reporting over the next few weeks.  I want to take a look at three that are upcoming that I find very intriguing....and for different reasons.  Let's get it started.....

Let's talk a little earnings history here first.  Of its last 17 quarterly earnings reports, HEAR has moved lower 12 times.  Of the 5 times it's risen, however, check out three of their gains the day after earnings:

Those are massive gains!  HEAR has risen after each of the past 2 earnings reports, including that 64.6% jump earlier this year.  HEAR's low year-to-date stock price was 1.64 in February and it's high was 34.50 in August.  From 2018 Q1 to Q2, revenues jumped 50% and its EPS rose from .16 to .40.  Clearly, market participants have priced in significant growth.  HEAR reports its latest quarterly results on Tuesday, November 6th after the close.  Check out the chart: 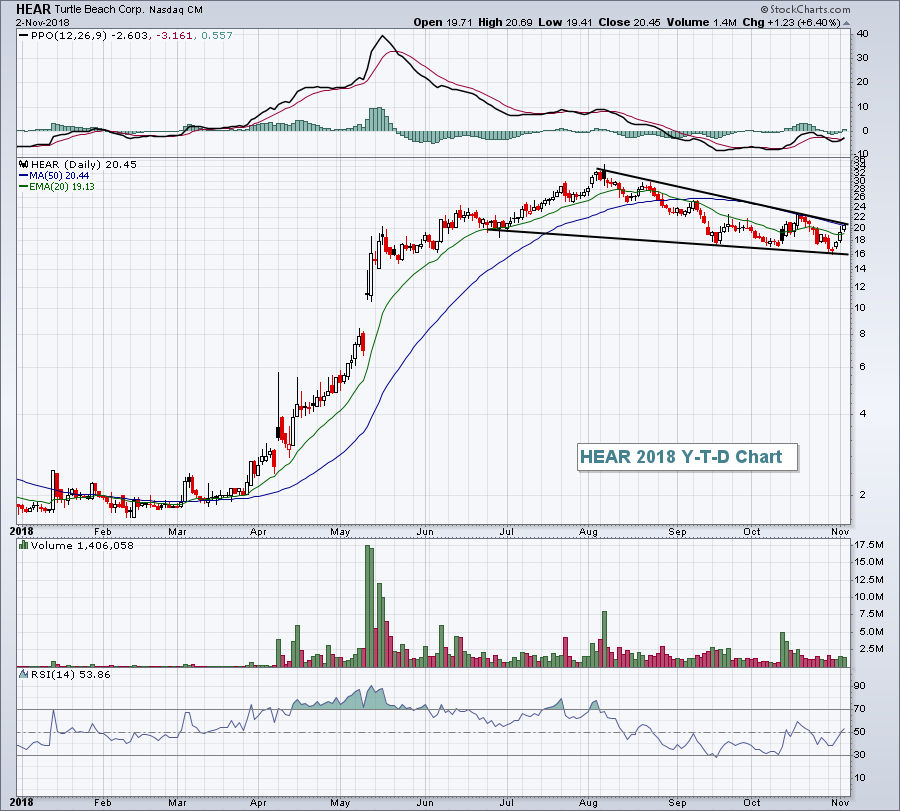 I see a big move upcoming in HEAR, but which way?  Over those last 17 quarterly earnings reports, keep in mind that 4 have seen declines of 13% or more the day after earnings.  HEAR has seen a lot of profit taking since that August high and small cap stocks have been completely out of favor since early September.  We did see small caps come to life last week, though, and a solid report by HEAR on Tuesday could set off some serious fireworks.  While those explosions can be breathtaking, don't forget what can happen when you play with fire.

TWLO is in the software space and has been on an absolute roll since early February 2018.  The stock has moved from a low of 23.25 on February 9th to a high of 88.88 on September 26th.  The market's been consolidating in 2018?  You'd never know it by TWLO's rapid ascent.  The story here isn't simply the stock price movement, however.  TWLO has blown away its revenue and EPS estimates in each of its last three quarters and has been rewarded the day after earnings as follows:

TWLO has been an ATM machine for traders on the long side in 2018.  Will it continue?  It's impossible to answer that question with certainty, but when the U.S. stock market finally bounced last week, TWLO gained more than 20% from its intraweek low (64.19) to its intraweek high (77.95).  That could be an indication that its business momentum remains quite strong.  TWLO is expected to report its latest quarterly results on Tuesday, November 6th after the close.  Here's the chart: 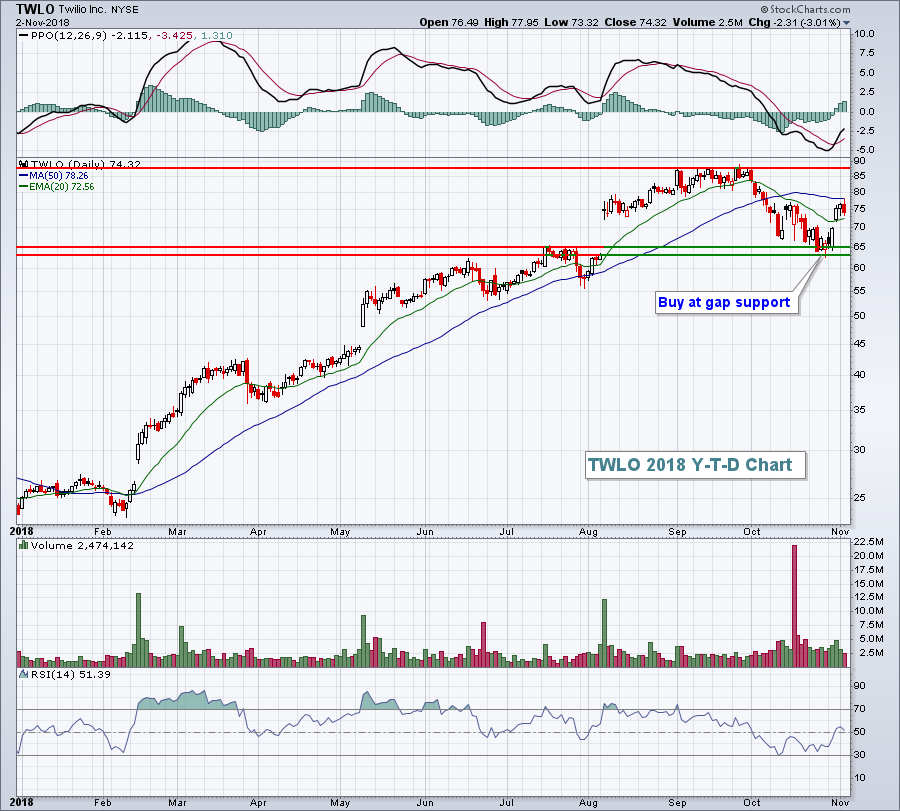 I provided TWLO as a Monday trade setup last week, along with several others including TradeDesk (TTD), another high-flying software stock that rebounded more than 20% last week.  The leaders lead when the stock market regains its footing and that's exactly what we saw with both TTD and TWLO last week.  You can CLICK HERE to see the trade setups provided last Monday.  If this type of information is something you're interested in, check out my latest Trading Places blog article and scroll to the bottom of the page.  You'll see a green "Subscribe" button.  After typing in your email address in the box provided, you'll begin receiving my daily blog article every day the moment that it's published.  I'll do my best to keep you updated on the latest market action and provide you my thoughts as to the short- and intermediate-term direction of U.S. equities.  As always, thanks for your support!

Let's move on to healthcare.  Medical supplies ($DJUSMS) had been one of the hottest areas of the market heading into October, then completely fell apart over the past month.  HAE, however, has been a very strong relative performer in this space and could be setting up for another very solid quarterly earnings report.  Over the last four quarters, HAE has beaten top and bottom line consensus estimates every time and the market's reaction has been quite bullish, as you can see below:

Those gains may not jump off the page at you, but there's something to be said about consistency.  HAE has had negative reactions to its earnings over the past four years, but only twice has the stock fallen more than 5% the day after its earnings.  We've seen HAE move more than 5% higher after earnings eight different times over that period.  Clearly, management seems to do a pretty good job of executing its business plan and the stock market typically rewards companies with management teams it trusts.  HAE is expected to report its latest earnings on Tuesday, November 6th prior to the opening bell.  Now for the chart:

The above chart shows that medical supplies have been under extraordinary selling pressure the past several weeks, but despite that pressure, HAE has managed to easily outperform the benchmark S&P 500, suggesting significant underlying strength.  It's difficult to predict what will happen to the stock price after its earnings report, but Wall Street definitely seems to be giving HAE a pass for the moment.

Hopefully, you find the above interesting.  And if you trade any of these stocks into their earnings this week, I wish you the best of luck.  But as a reminder as to what can happen even to some of the best performers heading into earnings, please check out Fortinet (FTNT).  FTNT has a SCTR in the upper 90s and had been a constant outperformer within the software space ($DJUSSW) heading into earnings on Thursday, November 1st after the close.  FTNT beat both revenue and EPS expectations and then this happened: 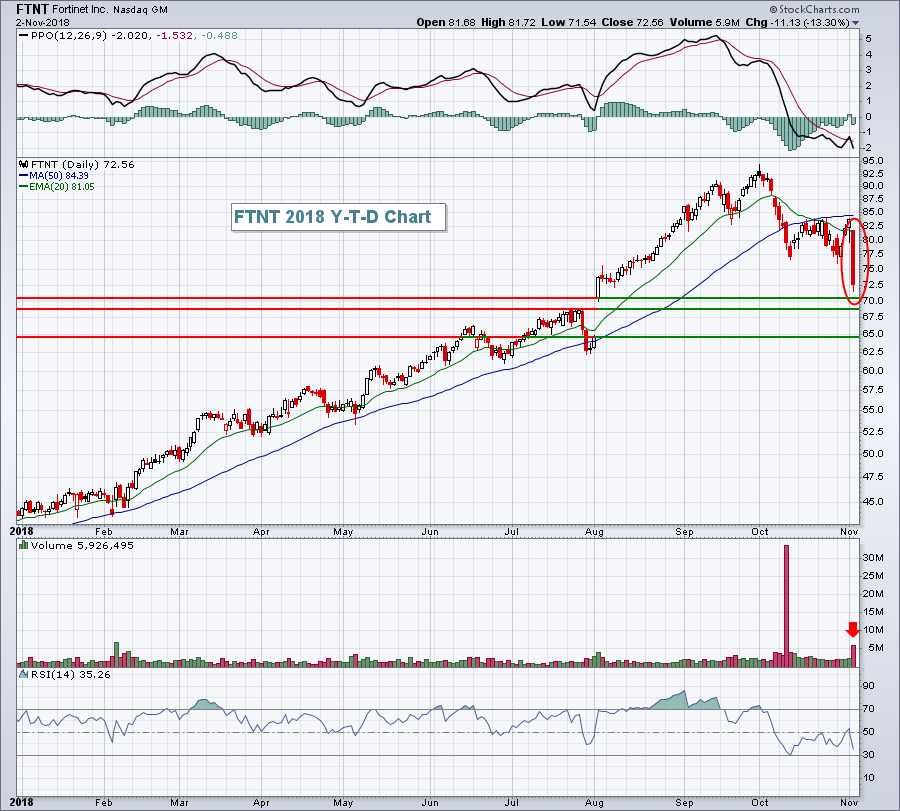 FTNT was the worst performing stock on the S&P 500 on Friday, despite posting better-than-expected results.  It was a definite reminder for me not to hold stocks into earnings.  If you decide to make that call to own stocks into their earnings reports, just understand the downside risks in addition to the upside reward.