Everybody wants the secret formula.  You know, the one where you never lose money.  Well, I haven't found THAT one yet, but trading companies that have recently beaten Wall Street revenue and EPS estimates is a fairly solid runner-up strategy.  A company that produces results in excess of analysts' expectations often has a management team trusted by Wall Street.  Before I discuss the best of the best, let me remind you of an article I wrote in my Trading Places blog on July 27, 2018.  It was titled "Key S&P 500 Support To Watch And Why I Wouldn't TOUCH Facebook".  (By the way, scroll down to the bottom of my Trading Places article and be sure to subscribe for FREE - thanks!)  Facebook (FB) did the inexcusable.  They misled Wall Street.  FB traded at an all-time high just before they dropped a bomb on analysts and shareholders alike.  Operating margins for the next two years were cut significantly (45% to 35%).  That revelation required an immediate re-valuation of the company and, if you recall, FB lost more than $41, or roughly 20%, to close at $176 the next day.  The selling hasn't stopped there, however.  FB remains in a downtrend and, even after last week's rebound of 6-7%, trades at $140.  Trust in management on Wall Street, once lost, can be very difficult to recapture.  Look at how FB has been tossed into the gutter: 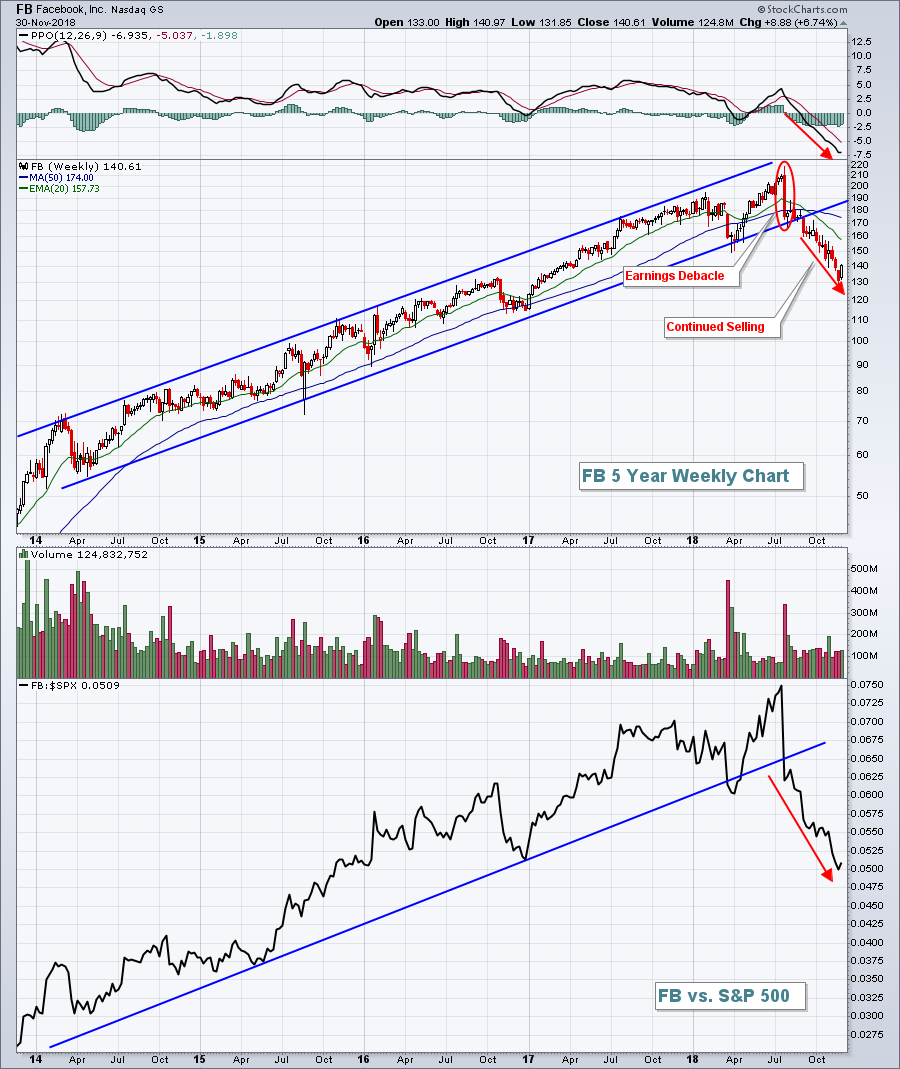 Wall Street doesn't easily forget, especially when a management team's incompetence costs firms millions and millions of dollars.  That "trust" has to be earned back and it can sometimes take years.

But let's focus now on what happens when management teams under-promise and over-deliver.  I review every earnings report each quarter, identifying companies where management has delivered revenues and EPS that exceed expectations.  I believe that Wall Street will reward those companies over time.  A better-than-expected earnings report typically results in a gap higher when trading resumes.  I don't like to chase prices, so I add these companies to my "Strong Earnings ChartList" and I await a better reward to risk entry.  On Monday, November 19th, I joined John Hopkins, President of EarningsBeats.com for an evening webinar and I provided a list of my 10 favorite companies from my Strong Earnings ChartList.  Since that webinar, the S&P 500 has gained 2.58%.  On average, the 10 stocks provided gained 9.16%.  Again, when the stock market rallies, solid management teams and companies are rewarded.

Of the 10 companies that I provided in that November 19th webinar, here were the two best performers over the past two weeks: 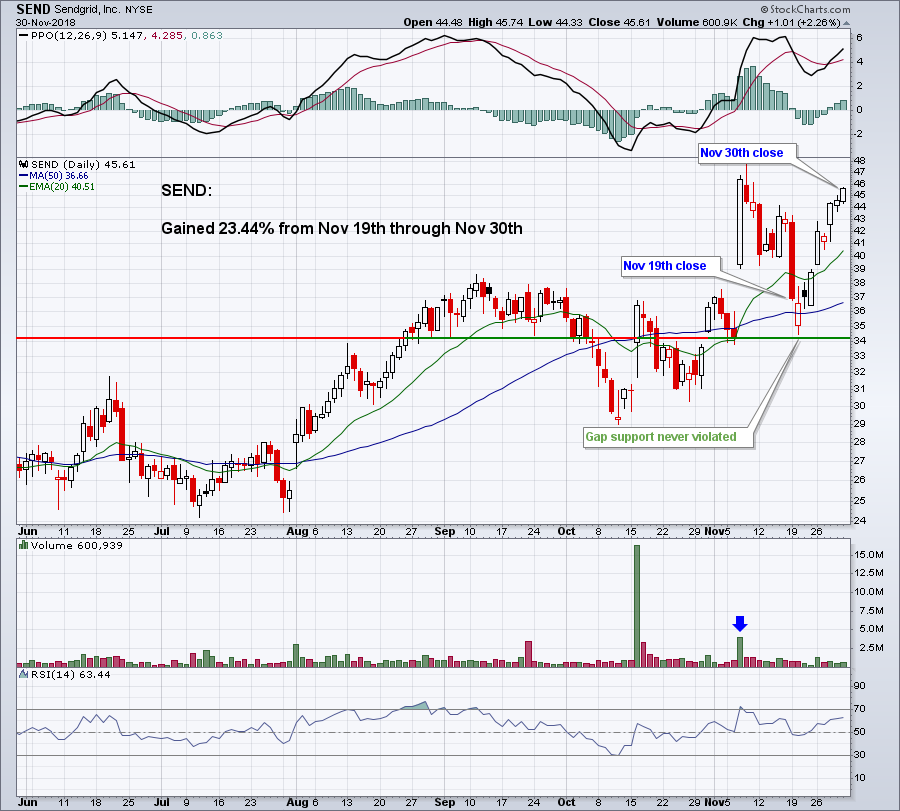 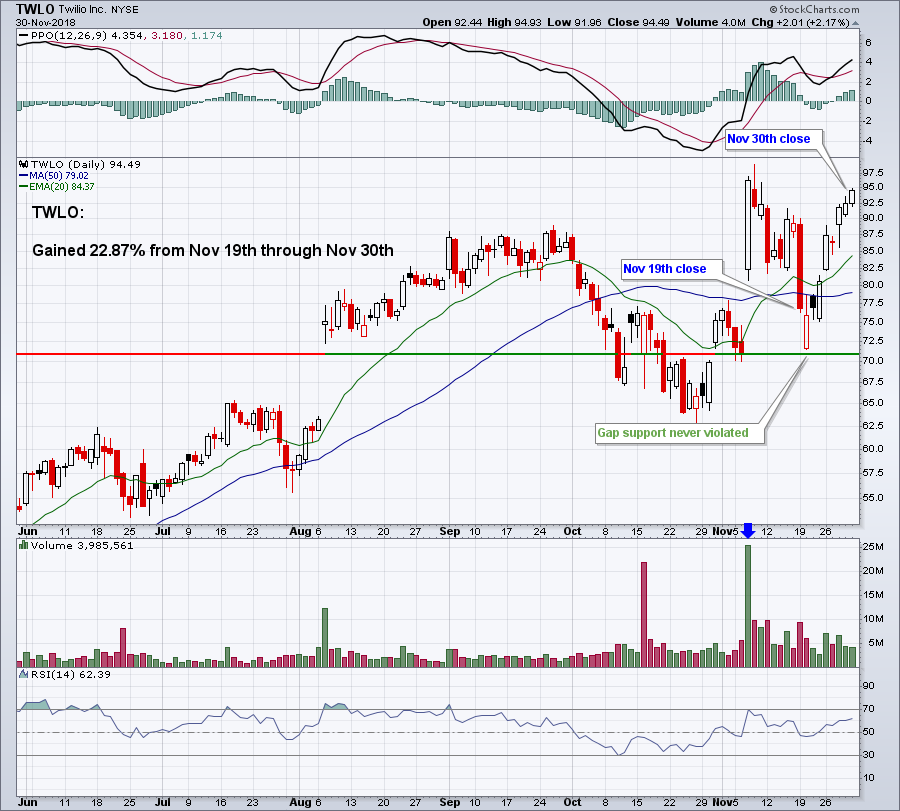 Like SEND, TWLO gapped lower on Tuesday, November 20th to open at 71.61.  A buy at that price would have resulted in a gain through November 30th of an astounding 31.95%!  Again, in just two weeks!

I realize that the highly volatile stock market environment of late aided stocks like SEND and TWLO, but their outperformance was remarkable.  In my opinion, one major reason was that Wall Street trusts these two management teams so that once the buying began, SEND and TWLO were on a lot of radars and screens.  If you were fortunate enough to buy either SEND or TWLO after the November 19th webinar, I'd sell them as they approach overhead price resistance.  I still love the companies, but they may struggle to break above those post-earnings highs.

One last thing.  The first week of December has historically been a very bullish week for U.S. equities.  If the S&P 500 continues its recent march higher, I have a list of 5 companies that I believe will outperform the S&P 500 in the coming days.  As a thank you for signing up at EarningsBeats.com, I'll send you an email detailing those 5 companies and key price support and resistance levels I'll be watching.