I love the seasonality tool here at StockCharts.com.  It can potentially give you an advance notification of a price move before it happens.  One of the more striking seasonal tendencies that I've seen has been the unbelievable historical performance of Bookings Holdings (BKNG) from January through May, where it's averaged the following monthly returns over the last two decades:

While seasonality can help to increase your investing and trading results, I treat it as simply one indicator and I don't overweight it.  I'm a big fan of the Percentage Price Oscillator (PPO), but I don't buy a stock just because its PPO makes a bullish centerline crossover.  It might be a confirming indication, but not a primary one.  I use the seasonality tool in much the same way.

I buy stocks that report better-than-expected earnings and look solid on their chart technically.  But it makes sense to me that combining all three - strong earnings, strong charts and strong seasonality - might be the best setup of all.  So as we look out over the next three months, February to April, I've come up with two stocks in the retail area that you might want to consider.  Why retail?  Well, the S&P Retail ETF (XRT) is a well-diversified ETF that tracks areas of retail.  Take a look at the seasonal performance of the XRT: 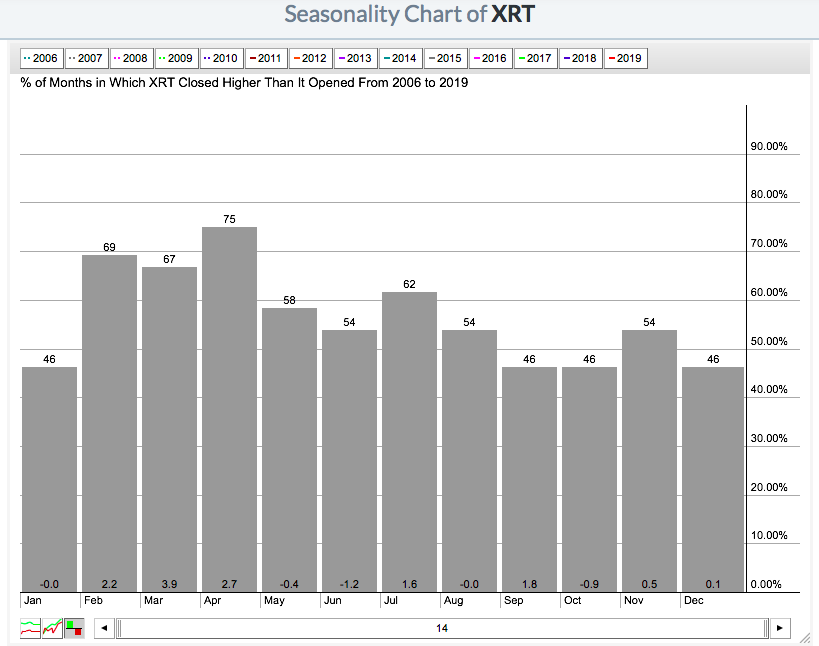 The seasonal strength from February to April jumps right off the chart at me.  The XRT has averaged gaining 8.8% over this three month period during the last 14 years.  The other nine months have produced an average return of just 1.5%.  So more than 85% of gains in the widely diversified XRT have occurred from February through April.  That's a seasonal stat worth delving into.  Therefore, I've uncovered two retail stocks that look solid technically and are exceptionally strong this time of year.  Earnings strength is just icing on the cake.

This specialty retailer ($DJUSRS) just posted revenues ($571.3 mil vs. $554.4 mil) and EPS ($1.04 vs. $.97) that easily beat Wall Street consensus estimates.  In addition, they raised guidance for FY19.  Great earnings.  Seasonally, FLWS shows tremendous strength in March, but the February to April timeframe has produced an average return of +14.9% over the last 20 years.  FLWS has the "scent" of a possible outperformer over the next few months.  Oh.....and did I mention the chart? 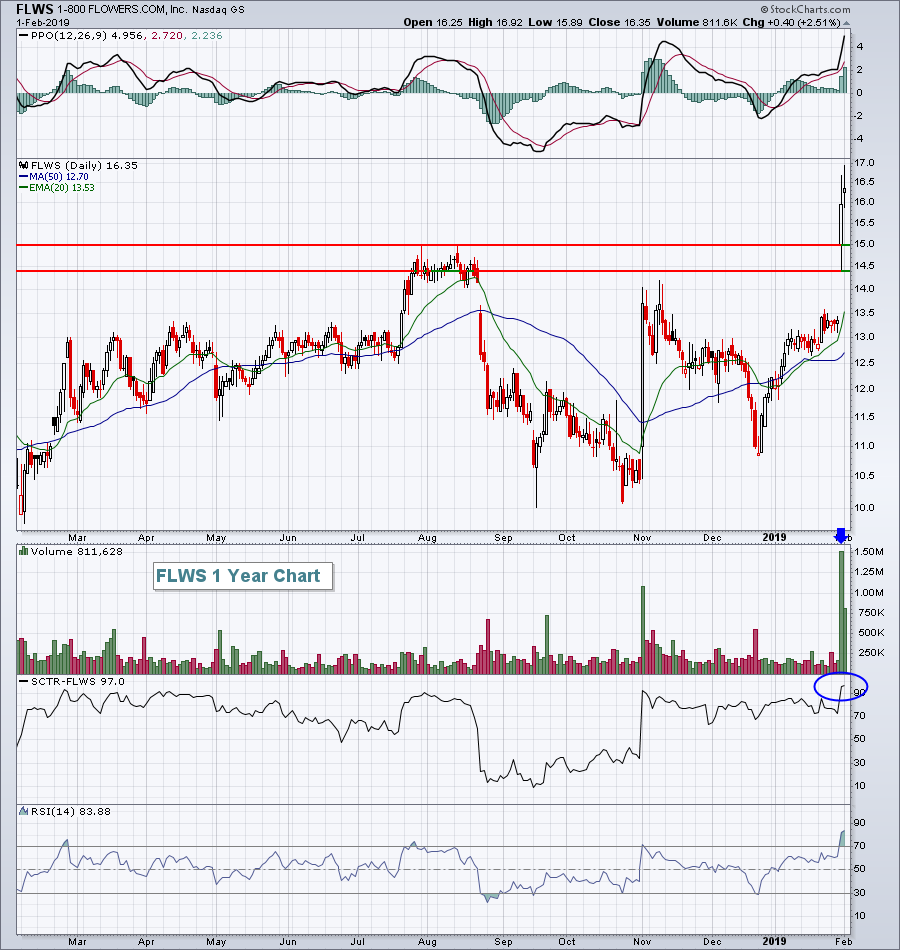 FLWS is short-term overbought with an RSI reading of 84, but it now has a SCTR of 97 (blue circle) and just cleared price resistance to break to its highest level since 2002 - all while mired in a cyclical bear market.  The technical outlook here is solid to match its impressive seasonal trend.  And the strong earnings and raised FY19 guidance won't hurt either.

BURL only has a 7 year track record, but I can't ignore the February and March stats over these 7 years: 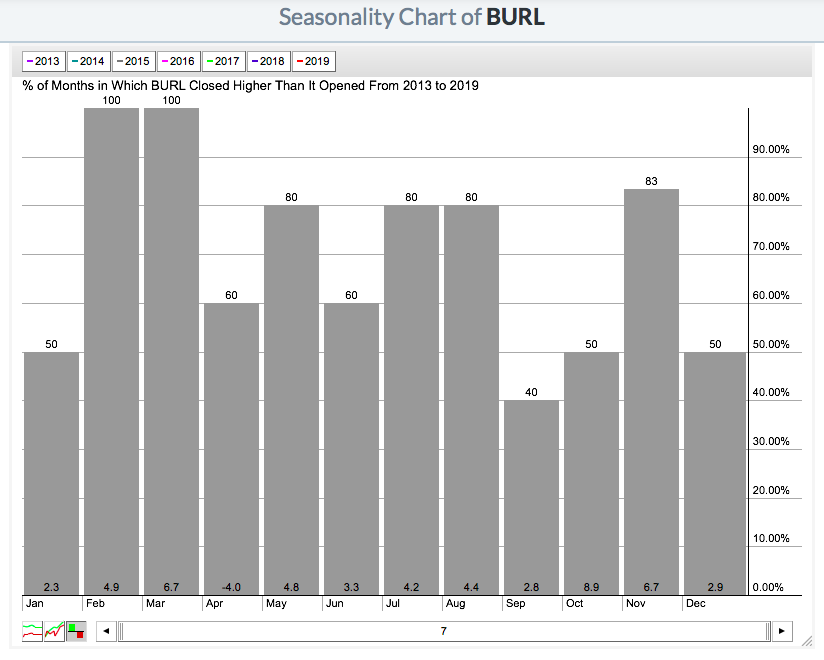 Over 7 years, BURL has averaged gaining 11.6% during February and March and it's risen in both months every year.  Of course, now that I'm pointing this out, it'll probably drop.  But BURL has been a very solid performer and its technical picture is solid as well: 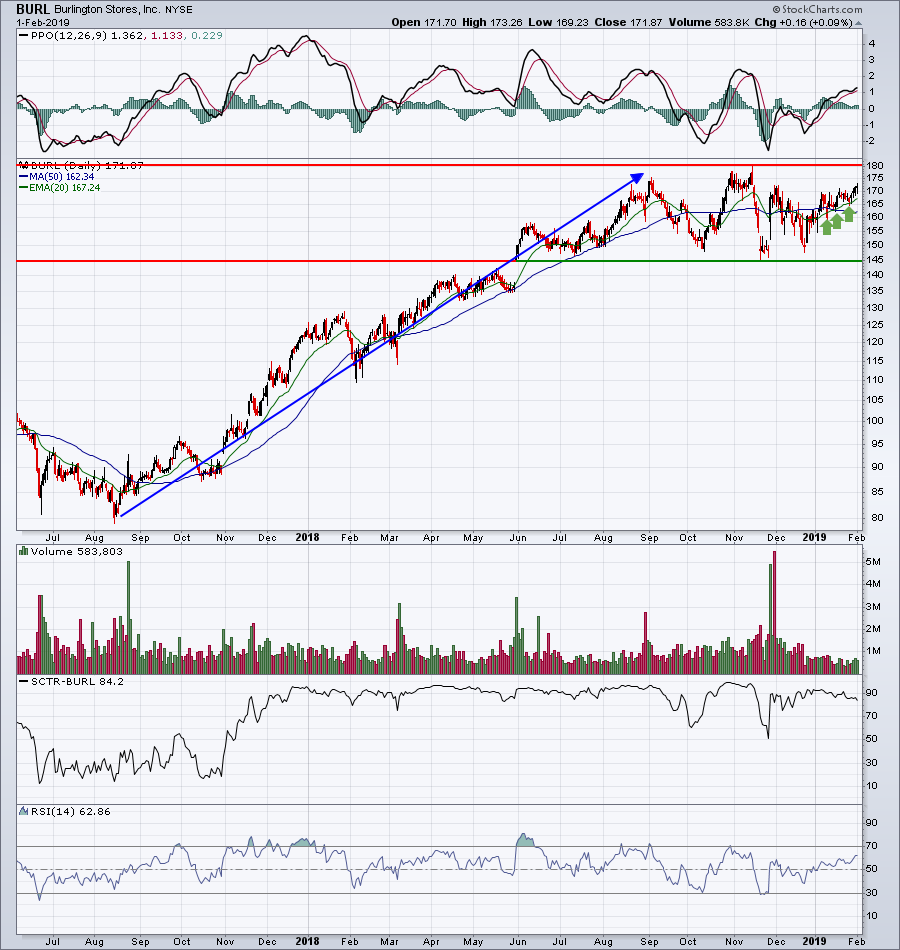 The prior uptrend is quite clear, as is the current consolidation zone between 145-180.  In 2019, we've already seen multiple successful tests of the rising 20 day EMA, a bullish development.  From an earnings perspective, BURL reported its latest quarterly results on November 28th and posted excellent revenues ($1.63 billion vs. $1.60 billion) and EPS ($1.21 vs. $1.06).

There's no way to predict how an individual stock will perform with absolute certainty.  We can only review the price action and use the tools at our disposal to help manage risk, while trying to outperform the overall market. I believe the combination of strong earnings, strong charts and favorable seasonal conditions can help us achieve that goal.

If you want to keep up with the latest stock market happenings and consider actionable trading ideas, then please follow me every day at my Trading Places with Tom Bowley blog.  My latest article "Bond Market Issues Major Warning" suggests that the bond market continues to predict economic weakness ahead and that could result in another leg down in stocks, despite the superb January performance we've just witnessed.  While you're there, be sure to scroll to the bottom of my article and provide your email address in the space provided and click the green "Subscribe" button.  After your FREE subscription, all of my Trading Places articles will be sent to the email address provided as soon as published.  As always, thanks for your support!  :-)