Much of the concerns over the past year have centered around weakness in foreign stocks, and whether that would eventually pull U.S. stocks lower. The general feeling seemed to be that sooner or later the discrepancy between strong U.S. stocks and weak foreign stocks would have to be resolved one way or the other. That meant that U.S. stocks would have to weaken, or foreign stocks would have to strengthen. Right now, it looks like the latter is the case. In other words, foreign stocks have started rising again which is helping support the 2019 rally in U.S. stocks. The solid blue line in Chart 1 shows the MSCI All Country World Index Ex US iShares (ACWX) rising to the highest level in six months. In so doing, the ACWX has also risen above a falling trendline drawn over the highs formed since last February. That signals that the nearly yearlong decline in foreign stocks has probably ended. The ACWX has risen back over its 200-day average for the first time in ten months; and its blue 50-day line has crossed over the 200-day line. All are bullish signs that suggest that foreign stocks are heading higher. The global rally is being supported by rising stocks in foreign developed and emerging markets. One of the most encouraging signs is coming from new signs of global leadership by mainland Chinese stocks which are rising even faster than U.S. stocks. 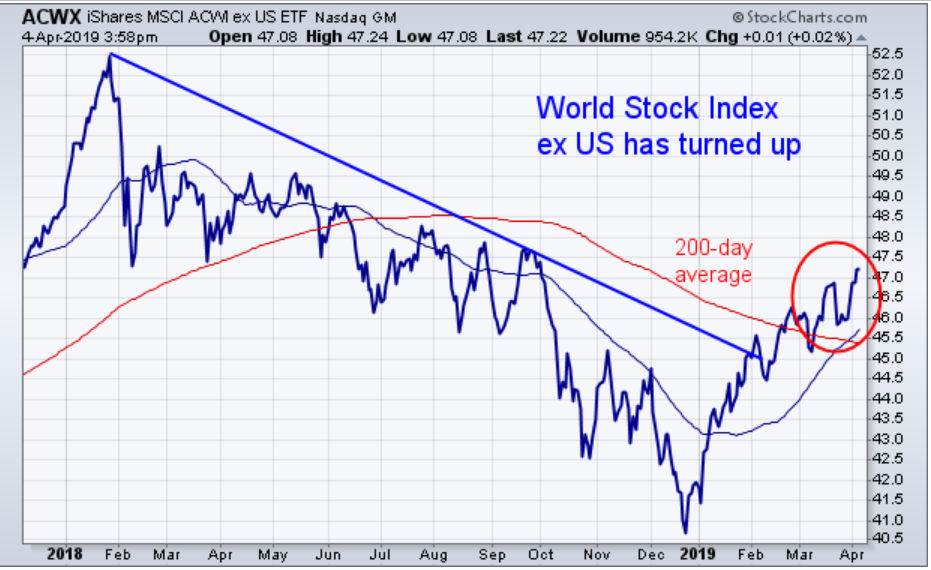