The volatility in the markets remains as investors continue to grapple with the latest global headline. With defensive areas of the market generally posting positive results, other areas are struggling to regain their footing following sharp selloffs.

Overall, cautiousness is still warranted, as the broader Indexes remain below key levels of support while investor skittishness has yet to be resolved. It's during times like this that investors would be well served to put together a watch list of candidates that have held in a bit better than the markets while their fundamentals have remained strong.

I'm talking about stocks that have pulled back, but have remained technically positive and appear poised to reverse their recent downtrends once the market gets on firmer footing. Below, I've highlighted 2 such stocks that recently reported strong earnings and are poised to turn positive. 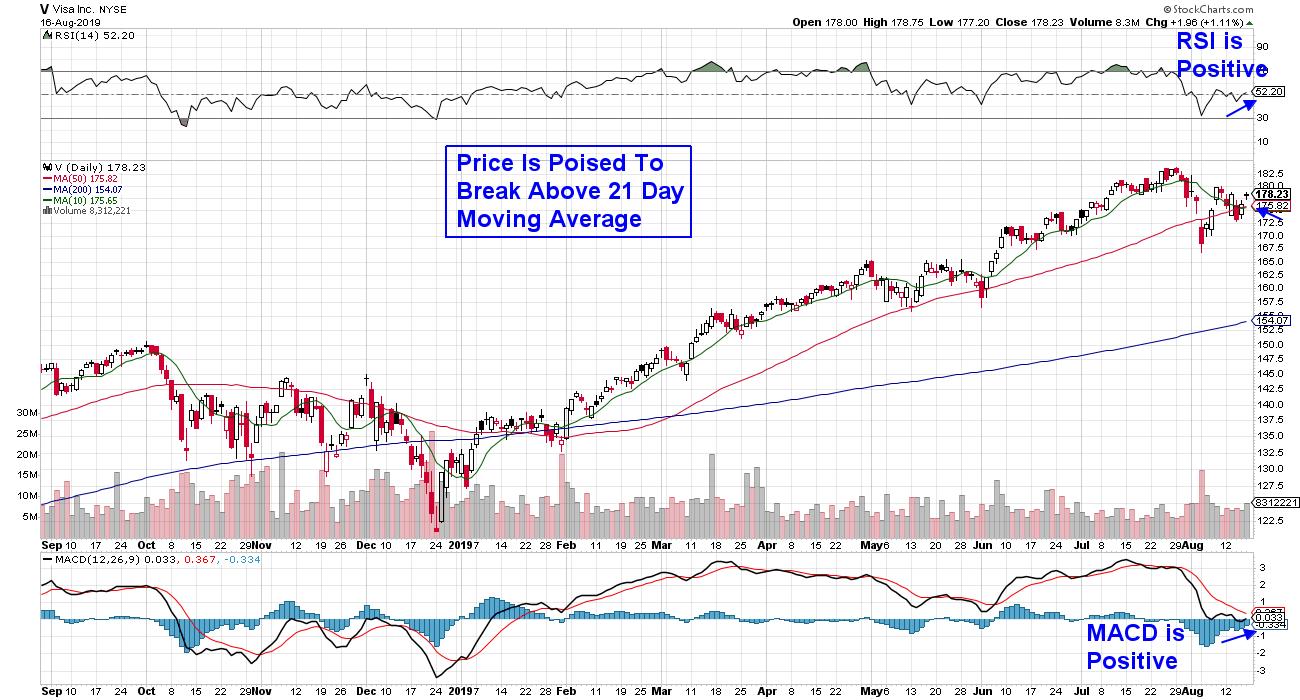 First up is Visa (V). The company is at the forefront of payment technology among consumers and merchants and reported strong Q2 earnings and sales results in late July. In addition to seeing a pickup in payment volume due to consumer spending increases, the company guided higher for this year and the next as the launch of new services are expected to tap into lucrative payment areas.

As you can see on the chart, the stock sold off sharply with the market and, more recently, has potentially regained its near-term uptrend following Friday's gap up in price on volume. Continued upside could easily push the RSI and MACD into positive territory, which would add to the chart's constructiveness. 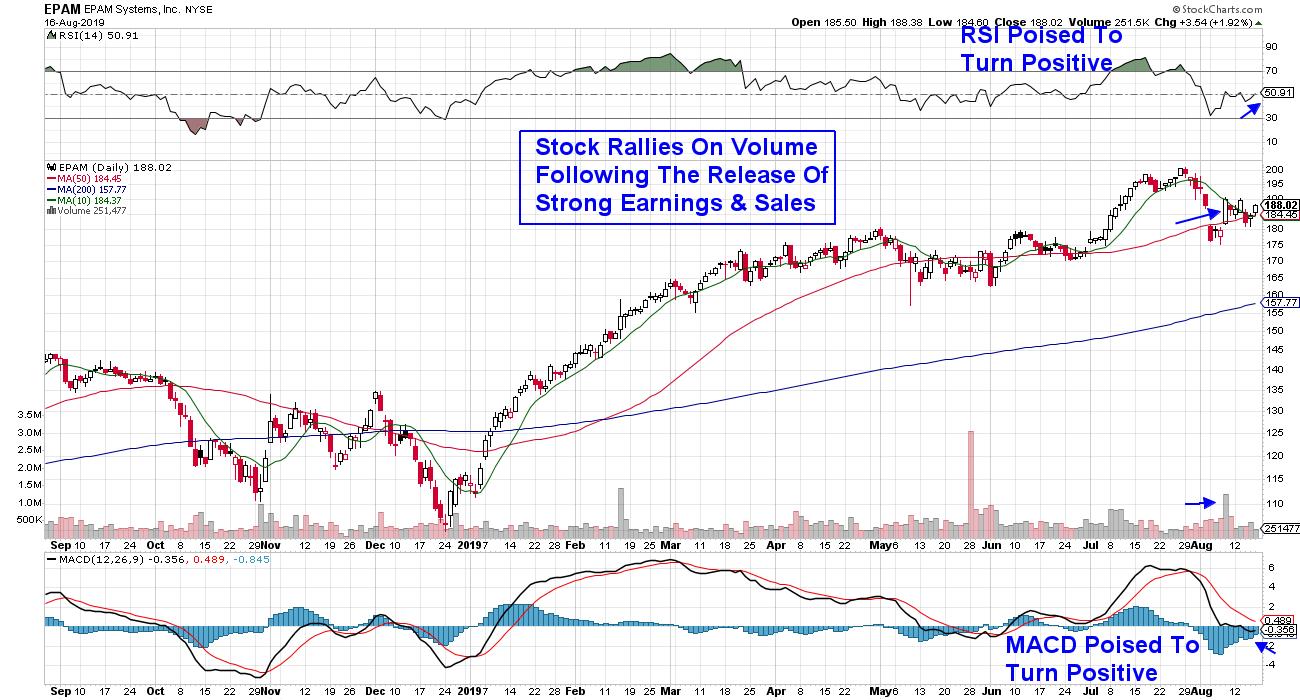 Next up is EPAM Systems (EPAM), which is a tech service company that serves many different industries with a specialty in financial services. The company reported earnings and sales last week that were ahead of estimates while also guiding higher going forward.

As for price action, the stock has remained in a trading range while the broader markets have dropped. This ability to withstand the market's downward pressure is a sign of strength. A break above its key 21-day moving average, along with a confirmed uptrend in the broader markets, would bode well for this stock. 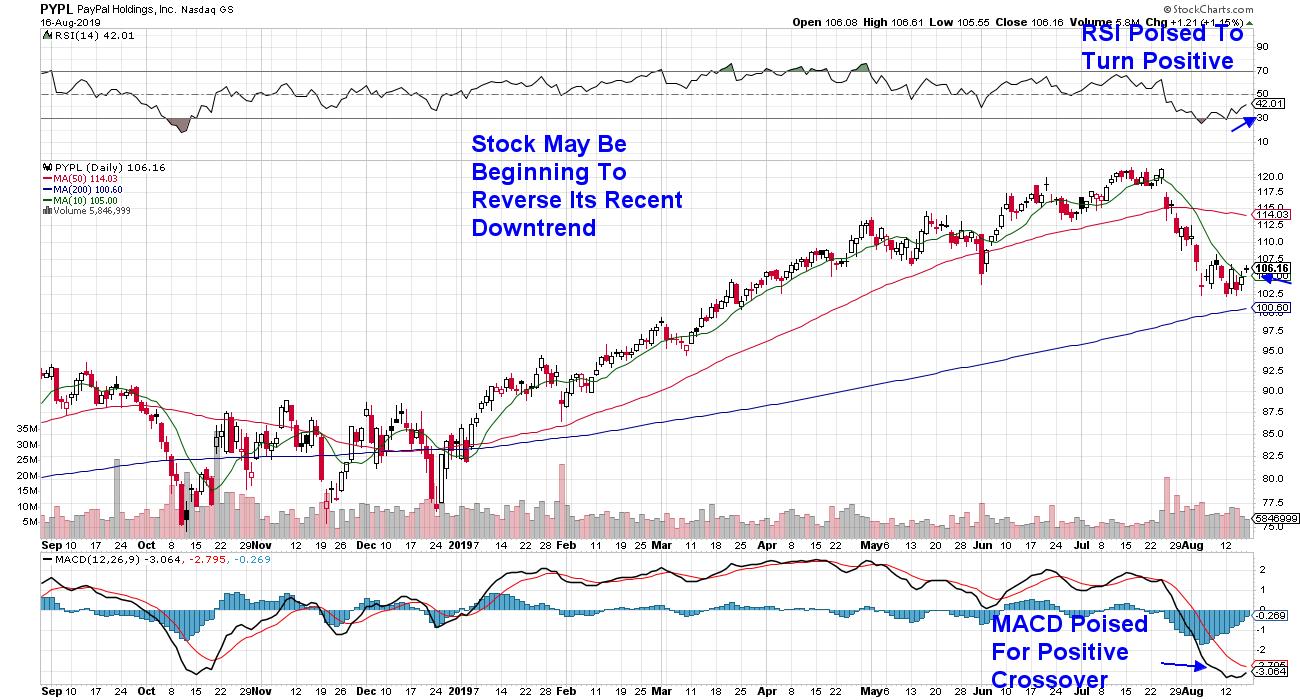 The last stock is also in the payment processing area and has sold off far more than the broader markets. The company is Paypal (PYPL) and the stock has dropped 20% since the company's release of earnings at the end of July. While their numbers were good, management guided lower for the remainder of the year due to delays in product integrations as well as currency pressures.

Since that announcement, Paypal has made strides in their instant cash transfer offerings that are expected to improve usership, while also making moves into the large marketplace of India. These developments, as well as the lowered valuation on the stock after its tumble, have analysts raising estimates.

That said, the chart has more work to do before this stock can be bought. As you can see, the RSI is heading north but has not yet crossed above 50 and into positive territory. While the MACD is close to having a positive crossover, with the black line up through the red, its position is well below the neutral 0 where a push above would be positive.

The good news is the fact that the stock has broken back above its 10-day simple moving average and. if we could couple this with other positive signals like the RSI and MACD, Paypal would then be on its way to reversing its recent downtrend.

My MEM Edge Report has other, more constructive stocks that are poised to benefit once the markets turn positive. To get a list of those stocks, as well as an alert when the broader markets and those stocks turn positive, use this link to take a 4 week trial for a nominal fee.