On each of the past two Mondays, I've hosted webinars that have highlighted stocks poised to trend higher with earnings results. It's a concept I discuss frequently and most of it has to do with relative strength. If Wall Street is accumulating, we need to take notice. It's as simple as that. My crystal ball approach to earnings season hasn't been perfect, but it's certainly been a whole lot better than a coin toss.

During each of the past two webinars, I've highlighted some 70 or so stocks, giving them either a green arrow or a red arrow. The green arrow suggested to me that the stock was performing well on an absolute basis as well as a relative basis. Based on that, I indicated these would be stocks to consider holding into earnings. The red arrow suggested the opposite, that absolute and relative weakness would have me concerned heading into earnings reports. A few stocks had black arrows, which simply meant I wasn't sold either way. While holding any one stock presents considerable risk, I believe these webinars proved my theory that relative strength really does matter heading into earnings reports.

Of the 47 stocks that I covered and assigned green arrows:

Of the 20 stocks that I covered and assigned red arrows:

Here are the charts of the two best reactions to earnings of those I had predicted: 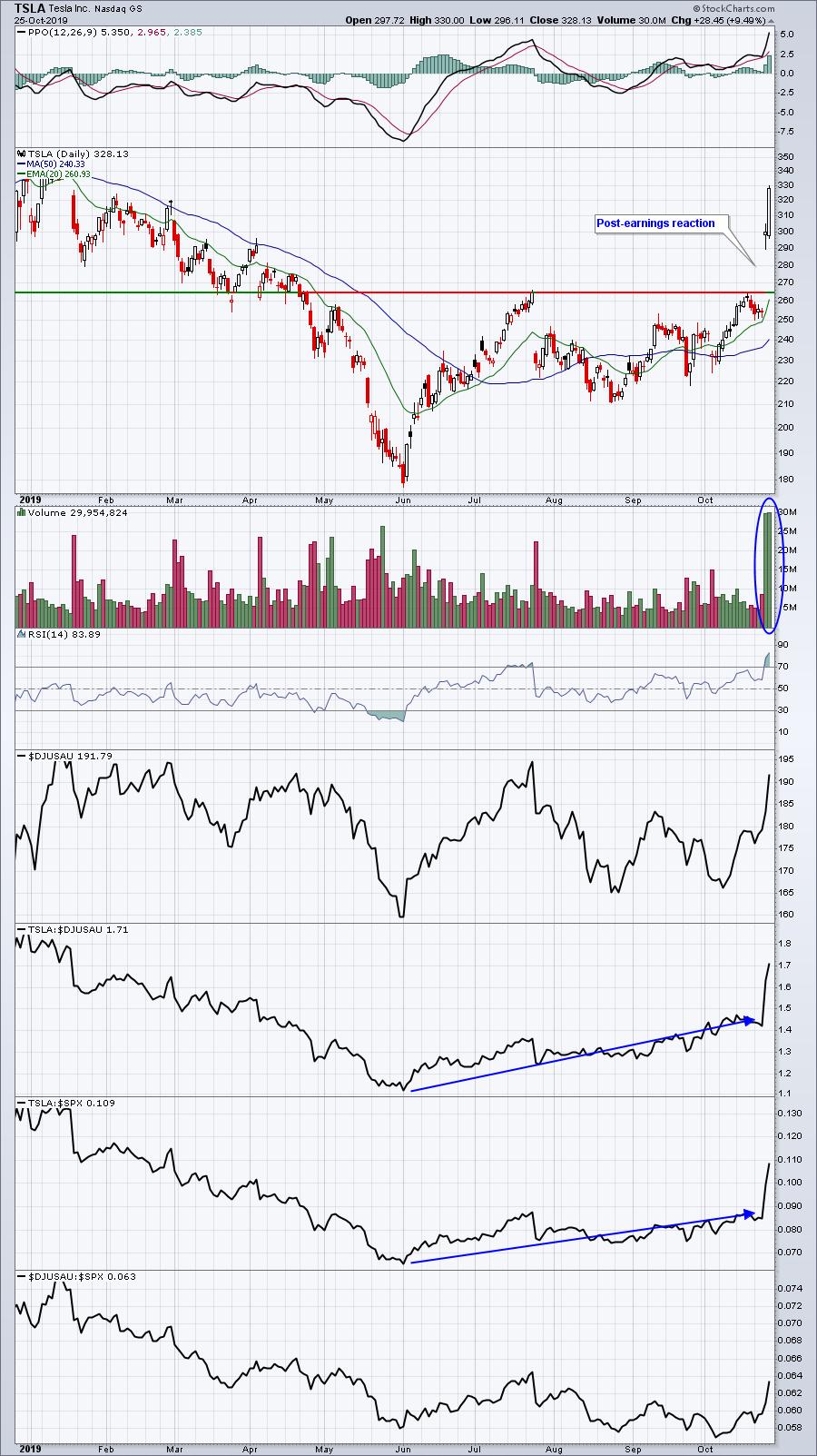 Despite not making the critical price breakout above 265, TSLA was showing steady relative improvement over the past five months. The massive volume confirming the breakout is undeniable. TSLA will see profit-taking at some point and become an attractive trade in Q4. 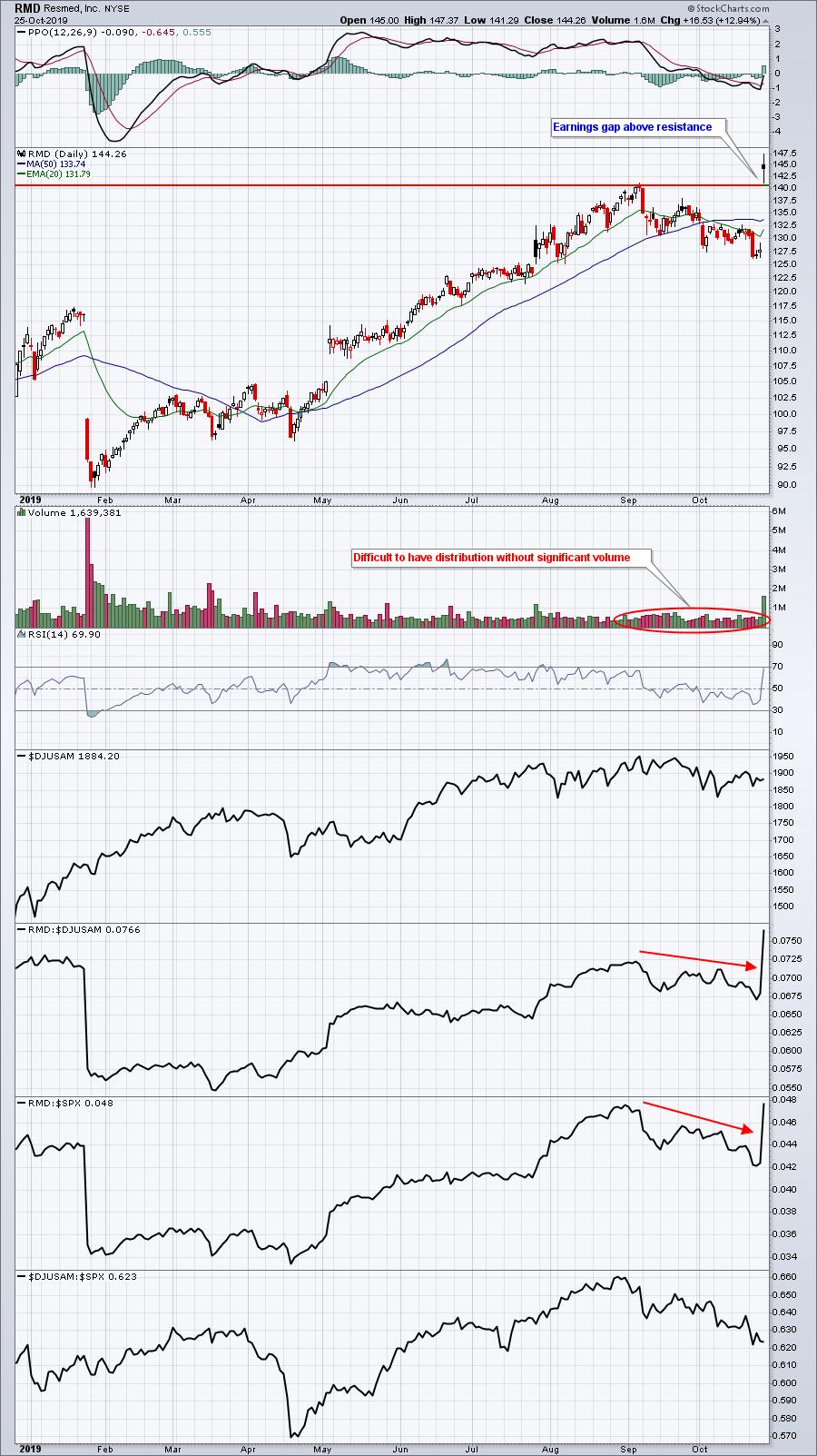 RMD was a bit more complex to review. Relative strength appeared to be declining over the past two months, but medical equipment stocks ($DJUSAM) in general were in decline. Check out the volume; if Wall Street was truly distributing shares of RMD, the volume would have been much more significant on the selling. That never happened.

While there were a few "whiffs" by relatively strong stocks, I believe the biggest may have been by Baxter Int'l (BAX). I had marked this one with a green arrow, but obviously Wall Street was not impressed by their latest results and guidance: 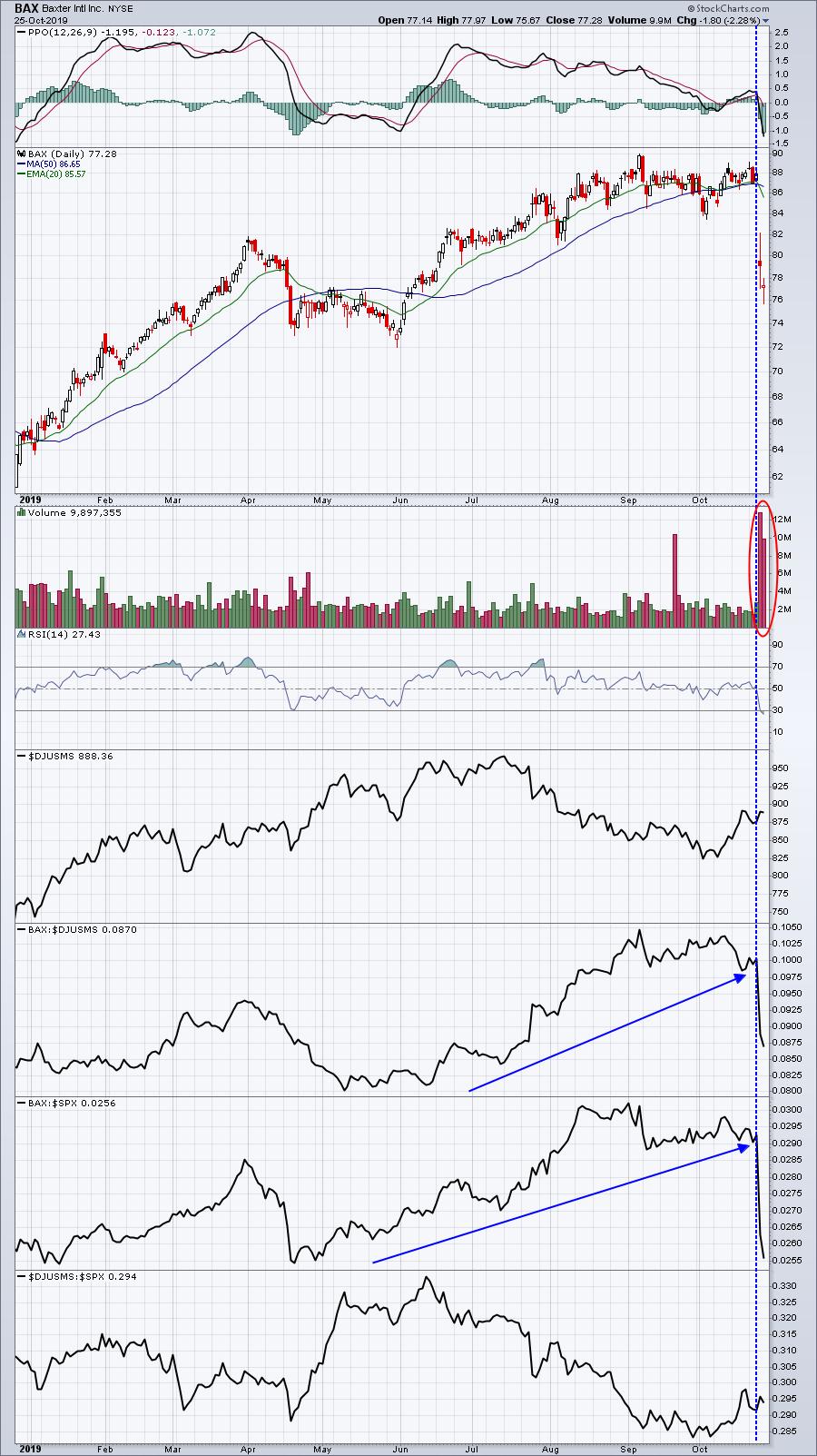 BAX seemed to be performing just fine, especially against its medical supplies peers ($DJUSMS). But the company missed its revenue estimate and, worse yet, indicated potential misstatements in prior quarters. As a former practicing CPA, I can tell you that I don't want any part of a company whose financial data integrity is compromised. Run for the exits! That's what Wall Street did on Thursday and Friday and I believe it'll be quite sometime before BAX regains the confidence of the Street.

I looked ahead to Monday's after-hours earnings reports and came up with 5 that I've given "green arrows" to. I'm sending those annotated charts out to EarningsBeats.com members on Sunday night. If you'd like to receive those, simply CLICK HERE to start your 30 day trial for just $7.