For 17 years now, Goldman Sachs (GS) has been following a strategy at year-end of picking up battered stocks that have underperformed the markets and holding them into the first 3 months of the new year. This "laggard strategy" has outperformed the S&P 500 over 65% of the time since 2012.

While the outperformance varies year-to-year, it's been as high as 4% last year and has an average of 1.4% overall. These results are for the basket of stocks; refining your selection among these battered stocks with an educated review of the charts could easily produce higher yields.

Here is Goldman's criteria: in addition to being in the bottom-third of performers for the year, they recommend buying the laggards where their analysts have an out-of-consensus buy rating and an above-consensus growth estimate. To narrow the list even further, the bank also likes names with a price target is at least 5% above 2020 consensus.

The focused list from this screen has many stocks that are in confirmed downtrends or are in a weak sectors, such as Energy. However, I was able to uncover 3 interesting stocks worth taking a look at. 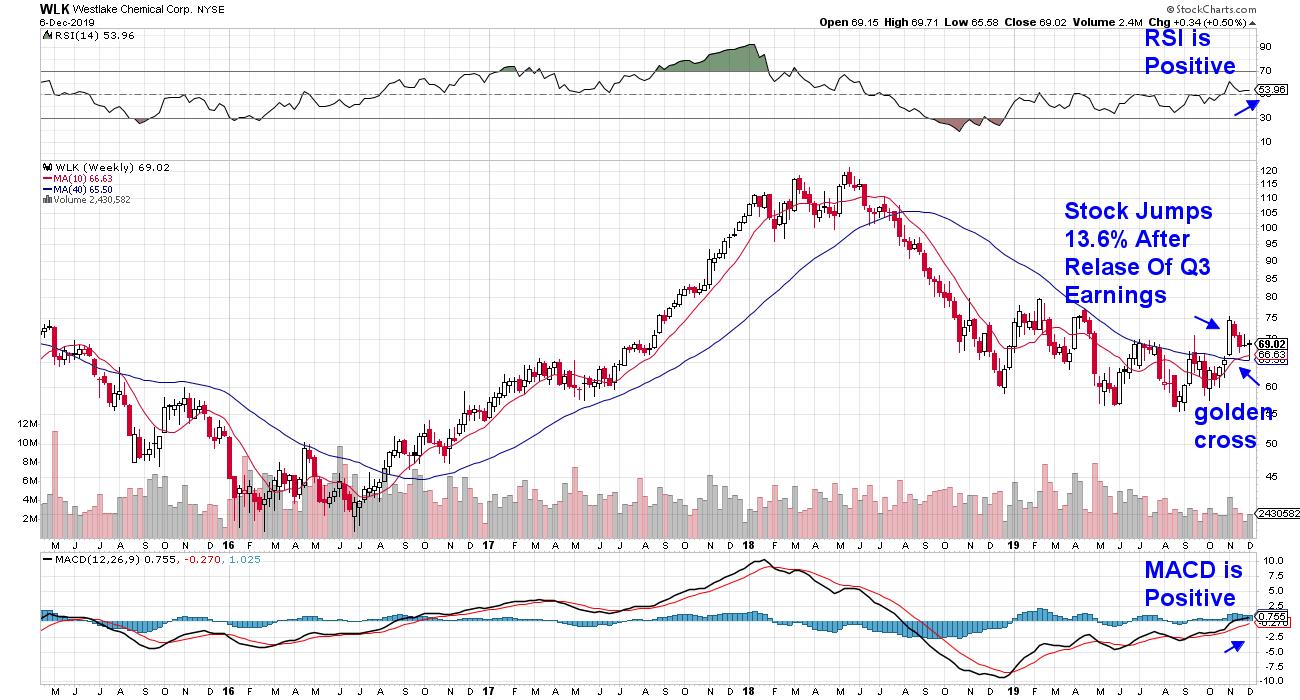 Westlake Chemical (WLK) is on its way to reversing a 50% downtrend since peaking in price in May 2018. The company recently reported 3rd quarter earnings that were 21% above estimates, which has analysts raising guidance for the 4th quarter. A close look at the chart shows that the sharp advance, in response to this positive surprise, pushed WLK above its key 200-day moving average on heavy volume. 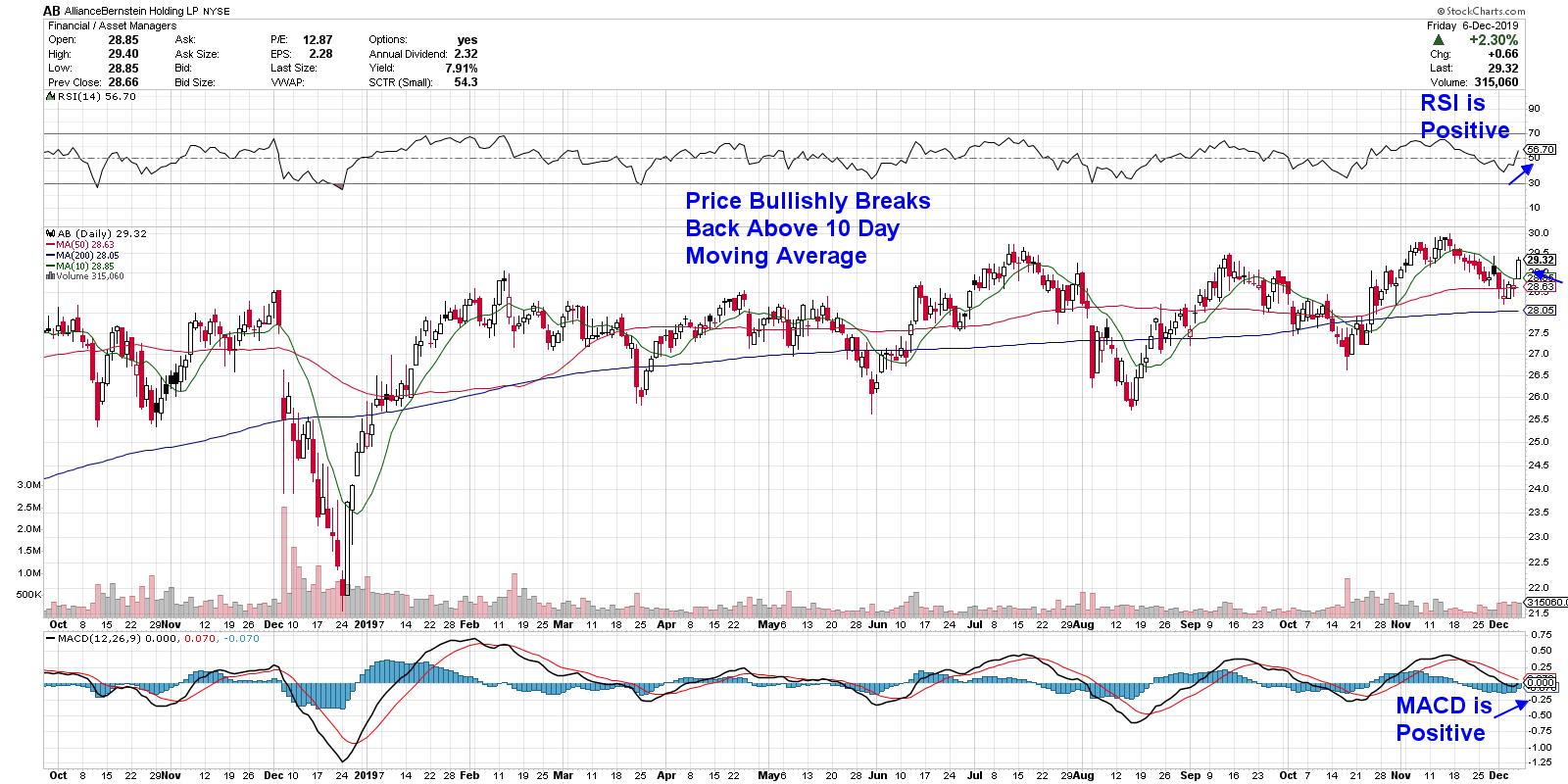 Next up is high-yielding asset management firm Alliance Bernstein (AB), who saw assets under management continue to increase from $592 billion to $601 billion during the month of October. The uptick in aum has increased client fees; this, as well as the launch of new products, has analysts raising estimates for next year. In addition to analysts' bullish outlook, the stock offers a 7.9% yield.

As you can see in the chart above, AB is emerging from an oversold position as it bullishly breaks back above its shorter-term 10-day moving average. The stock is very close to a breakout from a 5-month base at $30.95, which would be quite positive.

DAILY CHART OF UNDER ARMOUR (UA) 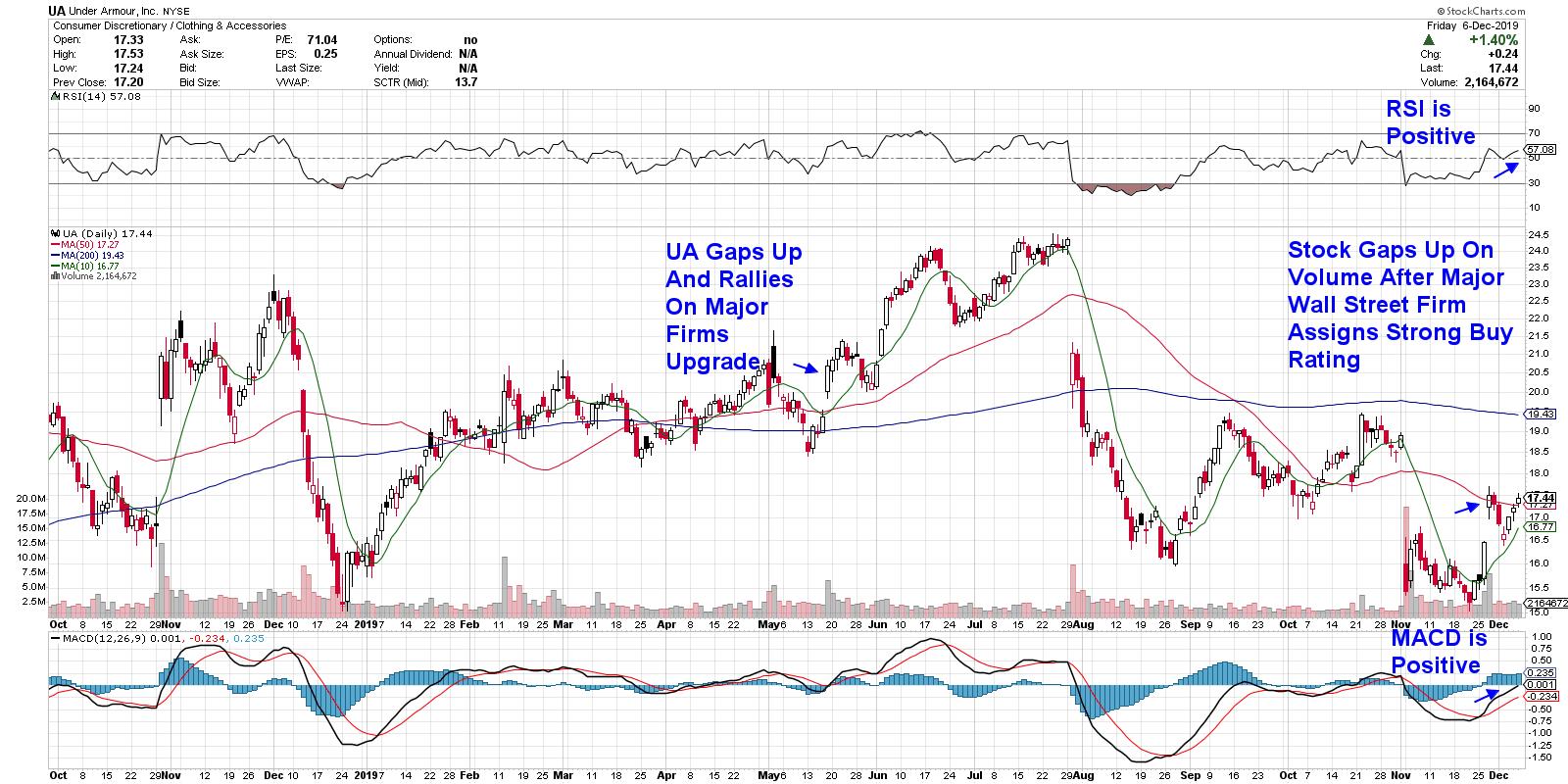 Last up is Under Armour (UA). While not the prettiest of charts, the stock is in the beginning throes of reversing a downtrend that began in early August, following the stock hitting a 2 ½ year high in price before declining significantly. Similar to UA's mid-year rally, the recent positive price action was sparked by an upgrade from a major Wall Street firm.

If the current price breaks back above its 50-day moving average and the stock is supported by a golden cross with the 10-day crossing above the 50-day, this stock could easily see more near-term upside. While the next area of resistance is the 200-day moving average, as of today that would be an 11.5% increase.

My primary expertise is in uncovering high-quality growth stocks, as they're poised to take off. However, many of the same technical tools can be used in selecting down-and-out or value stocks, such as those above.

For those who'd like to be alerted to top-performing growth stocks just as they begin to move higher, while also getting in-depth analysis into the broader markets, I urge you to take a trial of my top performing MEM Edge Report using this link here. This highly regarded report is delivered on Sunday and Wednesday with intra-week alerts sent as the markets warrant. I hope you'll take advantage of this opportunity!