Yesterday's message suggested that commodity prices may be bottoming; which could lead to a better 2020 for the first time in years. Part of that analysis, however, was based on expectations for a lower dollar. That's because a falling dollar is usually necessary for commodity markets to move higher. The last paragraph in yesterday's message explained some reasons why the next year could see a weaker U.S currency. Today's message will elaborate on some of them. The first has to do with the narrowing spread between Treasuries and foreign bond yields. Over the last several years, the spread between higher-yielding Treasury bonds and lower foreign bond yields supported a higher dollar. That spread was caused mainly by a more hawkish Fed which raised interest rates while the rest of the world kept negative bond yields. Over the last year, however, the Fed lowered rates three times and assumed a more dovish stance. That narrowed the spread between U.S. and foreign yields. That's normally negative for the dollar.

Chart 1 plots the spread between the 10-Year Treasury yield and similar maturities for German bunds (blue line) and British gilts (red line). Both lines peaked at the end of 2018, and have fallen throughout 2019. That's the biggest drop in years. The reason for the drop is the steeper decline in Treasury yields over the past year. According to Bloomberg, the 10-Year Treasury yield has dropped 89 basis points over the last year. By comparison, British and German bond yields have fallen 55 and 47 bps respectively. Over that same time span, 10-year Canadian yields (not shown here) fell only 40 bps while Japanese yields were unchanged. The fact that foreign yields fell less than the US is normally supportive to their local currencies.

Four of the six foreign currencies in the USD gained ground against the dollar over the last year -- the Canadian Dollar (more on that shortly), the British pound, the Japanese yen, and the Swiss franc. Over the last three months, five have risen against the dollar -- the pound, the Swedish krona (more on that shortly), the euro, the Swiss franc, and Canadian dollar. Only the more defensive yen lost ground. The krona's recent gain was the result of the Swedish central bank raising its short-term rate out of negative territory for the first time in years. And may have signaled that other foreign central bankers may start doing the same. That would be further supportive of their local currencies. And bad for the dollar. Foreign currencies of countries that export commodities have also had a strong year. That includes the Canadian Dollar. 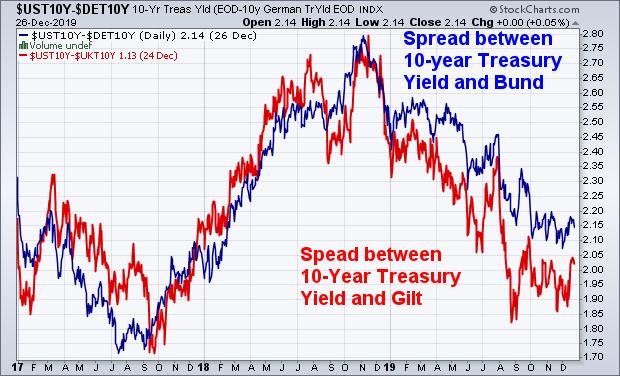 Editor's Note: This is an excerpt of an article that was originally published in John Murphy's Market Message on Friday, December 27th at 1:22pm ET. Click here to read the full article, which includes Charts 2-5.