I'm sure that most of you have heard that old Wall Street adage "buy on rumor, sell on news." Well, it's never truer than with earnings. Wall Street meets with management teams prior to the end of the fiscal quarter and gathers a lot of information. It's one big advantage that Wall Street firms have over you and me. They have the ability to find out exactly how quarters are looking, then return to their offices and begin buying (or selling). The actual earnings news isn't released for another 3-4 weeks or longer. It's also the big reason why companies tend to move much higher into a solid earnings report. By the time the earnings are announced, it's simply too late for those trying to chase those moves.

In every calendar quarter, except the fourth quarter, the first half of the quarter is BY FAR the better half. It's not even close. It's all the "buying on rumor" that drives U.S. equities higher. The numbers above relate to the entire S&P 500, but many companies are known for beating earnings and they tend to see huge moves heading into earnings, so let's check out one of the most popular pandemic growth stories.

From the low in the month prior to earnings to the close the day before earnings, SHOP has averaged gaining 45.74% the past 5 quarters. The average holding period has been 37 days, or roughly 5 weeks. 45% in 5 weeks on average - that's not too shabby. Here's the chart: 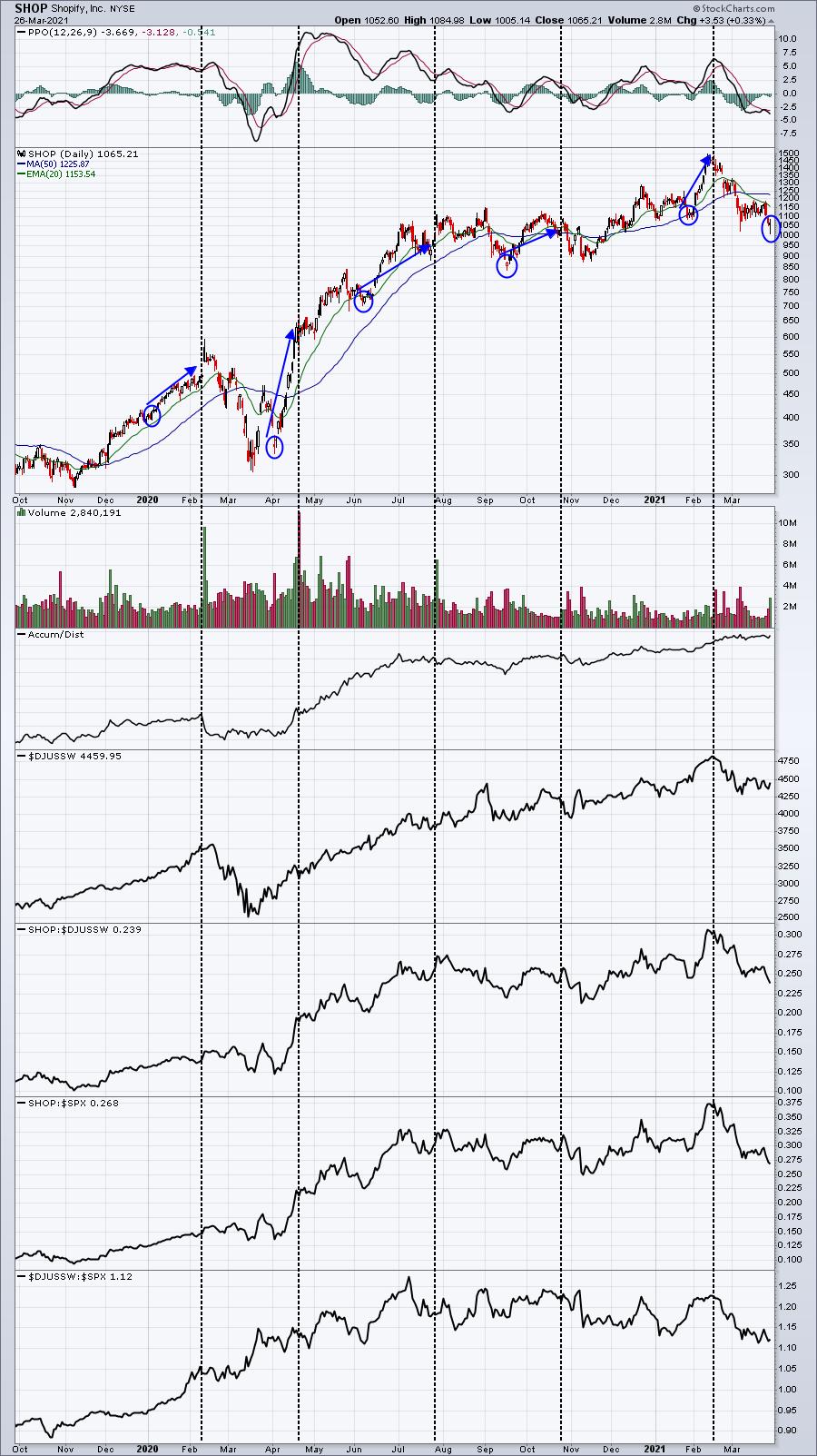 I see similar patterns nearly every quarter. Shortly after earnings, SHOP takes a hit on big volume. It's probably those that chased after big earnings having to panic sell after huge post-earnings selloffs (sell on news). I know many are arguing that growth companies are wildly overpriced, that we're in a bubble. I just don't see it. In the case of SHOP, it's trading at the same level it traded at last summer, despite huge increases in earnings. Granted, SHOP more than tripled during the first 3-4 months after the pandemic began. It makes sense to see a period of consolidation, which we've seen with SHOP. We're going to find out over the next 4-5 weeks whether Wall Street returns to buy shares leading up to its next earnings report. SHOP has averaged moving up 45% from the lows of the month prior to earnings up to the close just before earnings are released.

I'm planning to release another stock on Monday that tops SHOP in terms of average pre-earnings advances (+51%) and it does it in even fewer days (29, or roughly 4 weeks). Simply CLICK HERE to sign up for our FREE EB Digest newsletter and see if you can correctly name the company. It's been struggling just like SHOP for the past 6-8 weeks, but may be primed for another HUGE pre-earnings advance.