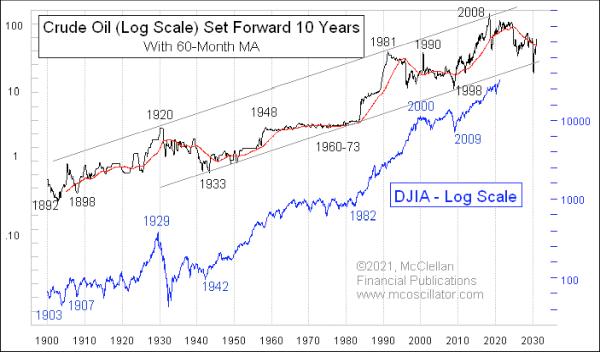 It is now officially April and, in past posts, I have noted that the leading indication message from crude has called for a stock market top due in April 2021. This should be the 10-year echo of the monthly closing price top in oil prices in April 2011. But what exactly does it mean to expect an April 2021 major stock market price top?

Looking closer, we can see that "10 years" does not always mean 10.0000000 years. The 10-year lag is not always perfectly accurate. Sometimes the turns come early, sometimes late and that does not invalidate its message. To use this tool and its insights means that we must accept that the message about the timing of the turns might not be perfectly punctual. 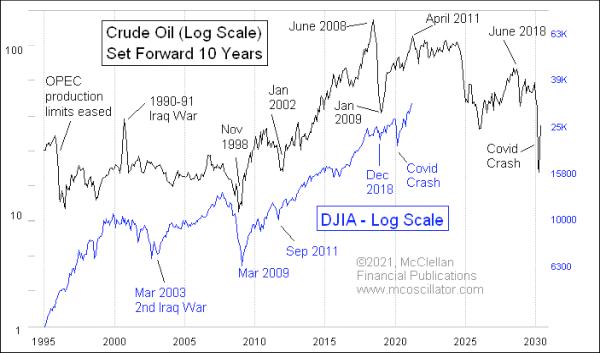 The December 2018 bottom for stock prices was a really scary moment. And it was one month off from the 10-year echo of the January 2009 bottom in crude oil prices. That is a relatively narrow amount of time-lag disagreement. At past turns, the amount of lag has been +/- 6 months. So expecting a stock market top to come in at exactly April 2021 just because of an oil price top in April 2011 means expecting more precision in this relationship than has historically been the case.

For example, the March 2009 stock market bottom was 4 months late compared to the November 2008 crude oil price bottom. And the September 2011 stock market bottom came 3 months early compared to the January 2002 crude oil bottom. The 10-year lag time is not perfect. I liken it to the baffles in an accordion not always having equal distance. The 10-year lag time can come in a bit early or late around the ideal 10-year period.

So what does it mean that a "top" is due in April 2021? The evidence suggests that it means a price top for the overall stock market sometime around April 2021, plus or minus about 6 months. That is a screwy way to do market timing, but it is the best that this model has to offer.

We therefore have to turn to shorter-term indicators to polish this message to a more precise degree. One other leading indication model is to look at M2/GDP shifted 1 year forward, a topic I discussed here back in February. 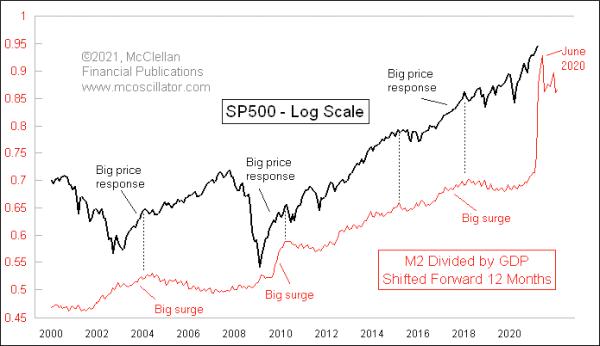 M2/GDP saw the biggest surge ever as a response to the COVID Crash and shutdowns. We have seen in the past that big surges in M2/GDP tend to get echoed in the stock market a year later, and the bulls are enjoying that echo right now.

But M2/GDP reached its peak in June 2020, which would mean a peak for the stock market in June 2021, assuming that the 1-year lag time works exactly perfectly. And that is an important assumption to bring to light, because the lag in this model is not always exactly 12.0000 months. This is a good enough model, however, to suggest that a top sometime this summer is reasonable to expect, and that would not be too far off from crude oil's message for a top ideally due in April.

In our twice-monthly McClellan Market Report and Daily Edition, we will be working through all of the other indicators we employ to home in on the exact moment of the expected top.