The Consumer Discretionary sector hit another new high in price last week. While Leisure and Entertainment stocks rallied on Friday's news of Pfizer (PFE)'s highly effective Covid pill, the recent rally in Discretionary stocks has been all about Automobile stocks and, in particular, companies that are winning the EV race. Subscribers to my MEM Edge Report are well aware of who the current winner is, as they've seen Tesla (TSLA) gain 72% since we added it to our Suggested Holdings List on August 1st.

TSLA's gains are on the heels of a strong 3rd quarter, as well as a lucrative deal with Hertz car rental; however, there was a push to new highs last week following the company's news that they've inked a 3-year deal to secure lithium batteries from Chinese supplier Ganfeng. Securing lithium batteries will continue to separate the winners from the losers among auto manufacturers who are looking to meet high consumer demand for electric vehicles. 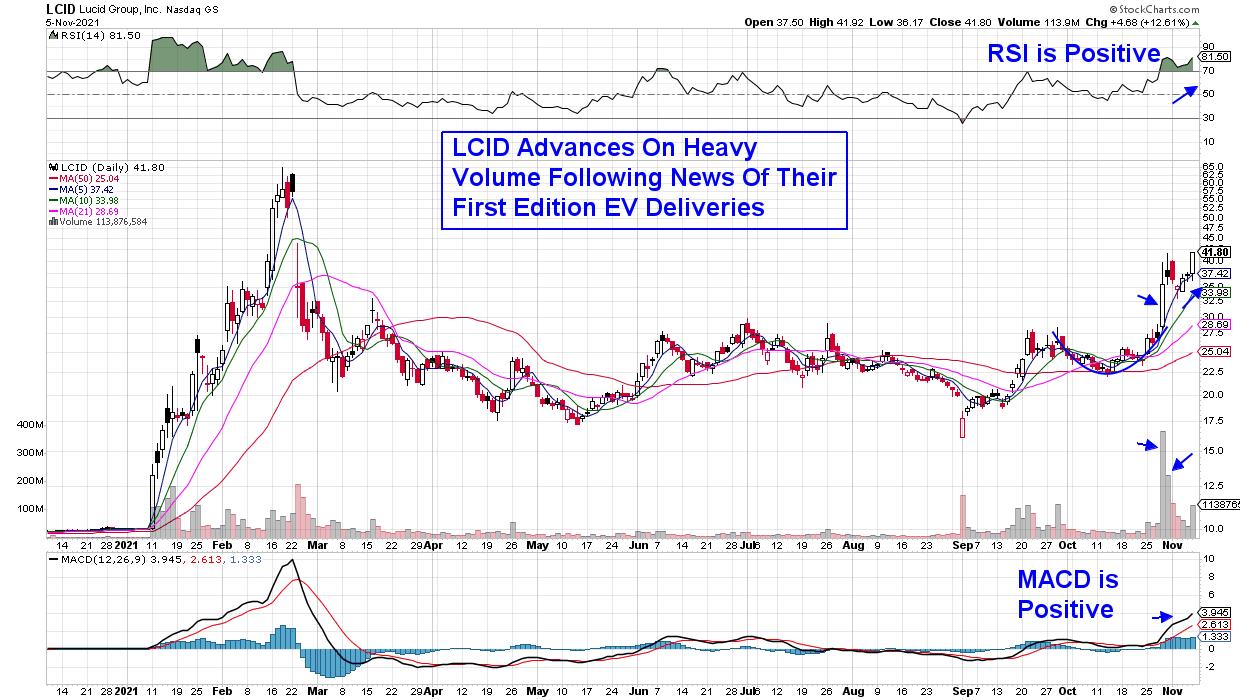 Electric Vehicle company Lucid Group (LCID) sold out of the first release of their Dream Edition sedans, which began delivery last Monday. The company has a reservation list of over 13,000 individuals who are interested in their 2022 edition.

LCID was started in 2007 and their CEO formerly served as VP of Engineering at Tesla. The stock soared on news of their new EV deliveries last week and is now in a confirmed uptrend. A look at the daily chart above will attest to the stock's volatility; however, its current advance is reminiscent of the rally into mid-February, when highly popular names were being run up on high volume. The stock is poised for further near-term upside; however, a tight stop in the 6%-8% range will protect you from unexpected distribution. 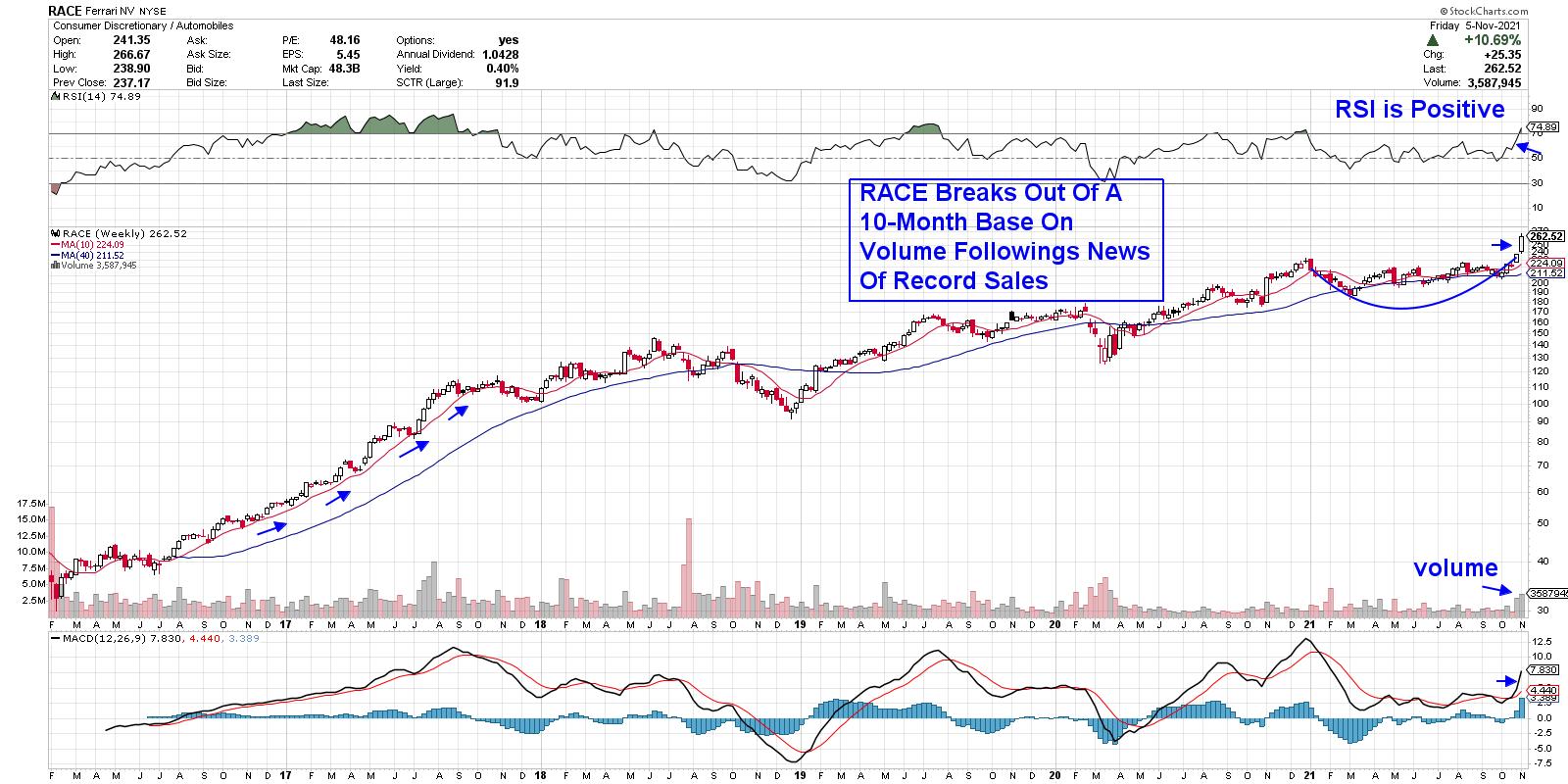 RACE reported record year-to-date vehicle orders last week despite their hefty starting price of $300,000. Morgan Stanley has tagged the company as their favorite EV stock due to their high technical capabilities and prestige. The company's current growth prospects are reminiscent of 2016 into 2018, during which the stock gained 157%. As you can see on the weekly chart above, a pullback to the 50-day moving average was an ideal buy point. 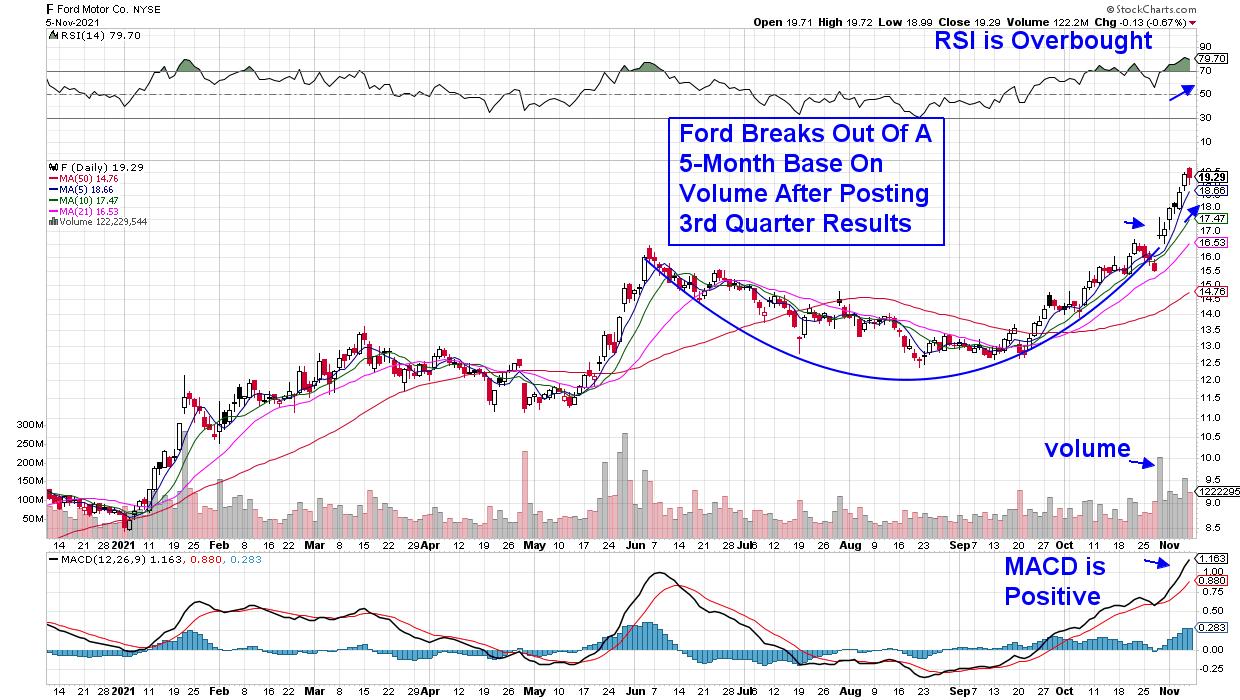 Ford (F) reported their 3rd quarter results in late October and, in addition to coming in 89% above estimates, the company announced plans to repurchase their outstanding $5 billion in junk bonds to help shore up their balance sheet. The news pushed Ford out of a 5-month base on heavy volume. The stock is overbought and I'd be a buyer on a pullback to its 21-day moving average, which is the top of its recent base breakout. 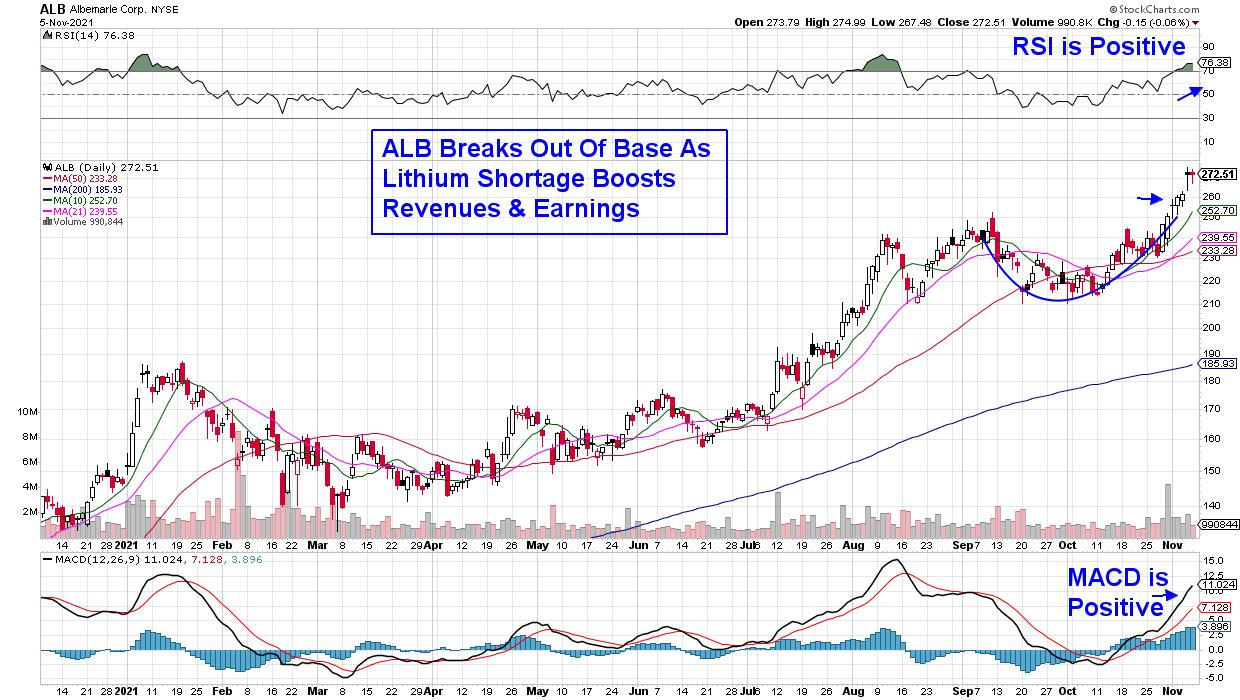 Among producers of lithium used in EV batteries, Albemarle (ALB) supplies about 1/3rd of the world's supply and, as EV production continues to accelerate, the company will continue to benefit. ALB broke out of an 8-week base after posting earnings that were 25% above estimates, putting the stock into a buy zone.

Last week's gains in each of these and other stocks that have rallied following reports of strong earnings and sales has pushed both the S&P 500 and Nasdaq into an overbought position. This technical position on the daily charts of these Indexes has occurred prior to the more pronounced pullbacks we've seen this year.

If you'd like to be alerted to the current market conditions and whether it's safe to put new money to work, trial my MEM Edge bi-weekly Report for 4-weeks for a nominal fee. By using this link, you'll have immediate access to recently released reports going back to January and this week's report will be delivered on Sunday.

In this week's edition of StockCharts TV's The MEM Edge, I reveal what's driving moves into the biggest gainers after earnings, as well as names poised to rally after their upcoming reports. I also highlight areas that have further upside following positive COVID pill news.