Like most technicians, I take a "top down" approach when it comes to my trading strategy. I start with the overall market, which, I believe, continues to be insanely bullish. My two biggest worries in the market have been alleviated as both small-cap stocks ($SML) and transportation stocks ($TRAN) have broken out to new all-time highs. Both of these groups tend to perform best when the U.S. economy is strong and/or strengthening. The recent breakouts point to further gains ahead: 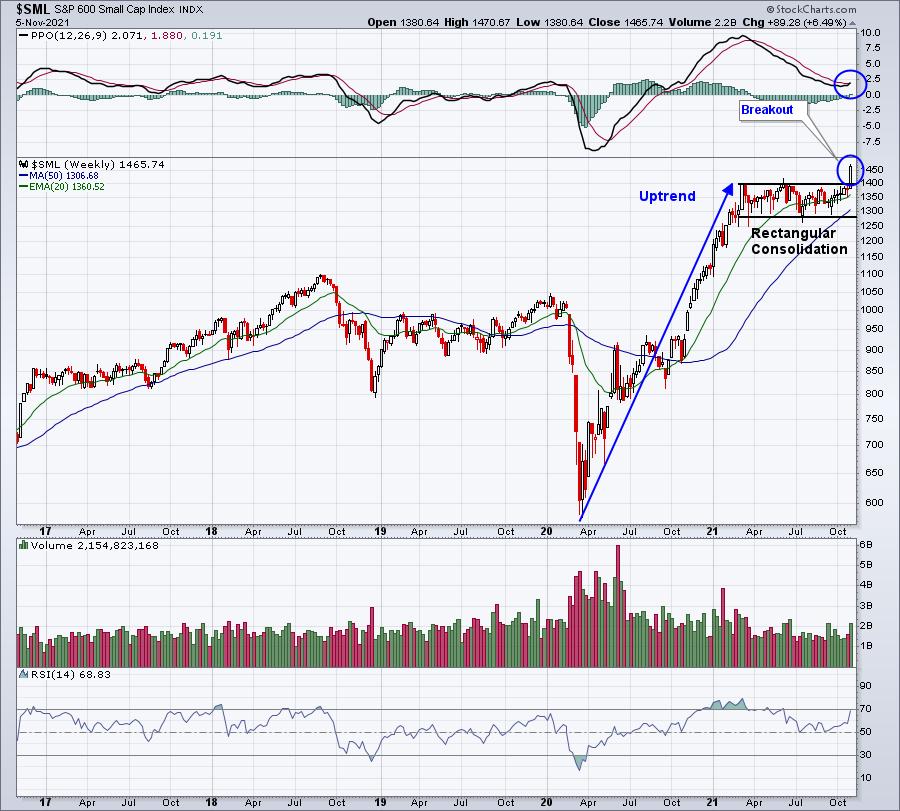 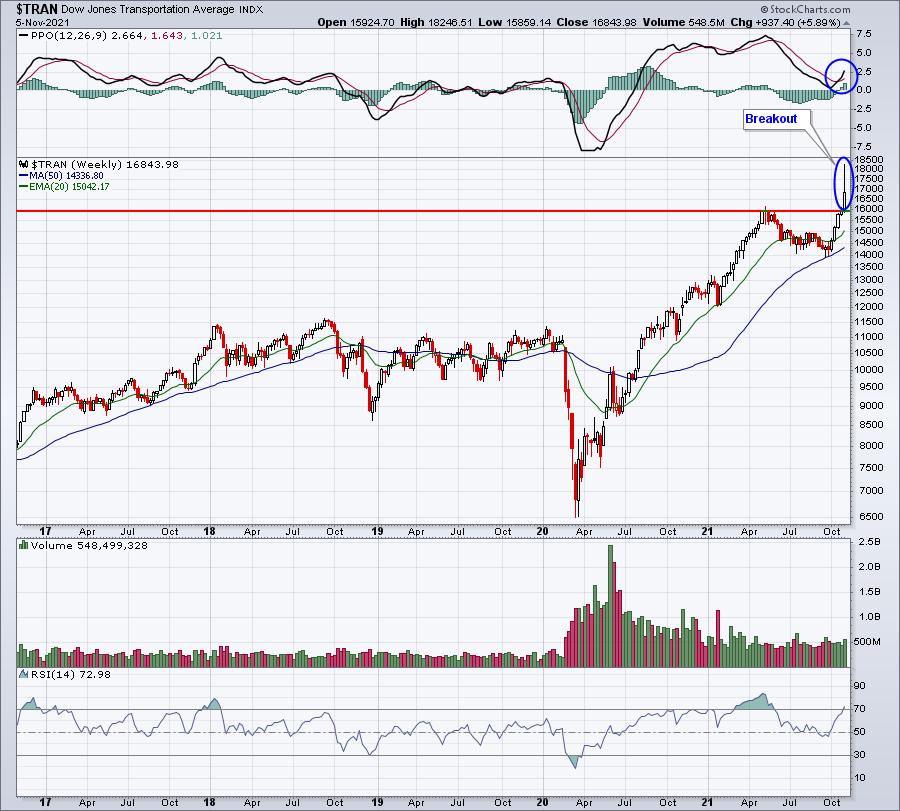 In my opinion, the lack of breakouts and follow through in these two groups has been the single biggest worry of mine relating to the sustainability of the current secular bull market. They were both rectified last week.

Transportation stocks are part of the industrials sector (XLI), which broke out on Friday after several months of consolidation and false breakouts. I believe it's quite likely that this lights a fire under the group for November and, likely, the balance of 2021.

Before I show you the XLI, do you recall what I've recently been writing about consumer discretionary (XLY)? When it broke out on an absolute basis, the XLY relative strength absolutely exploded. Here are the one-month returns of all sectors:

The XLY also had recently tested relative PPO support at -1.0 on its long-term weekly chart, just before this massive outperformance. Check out this chart: 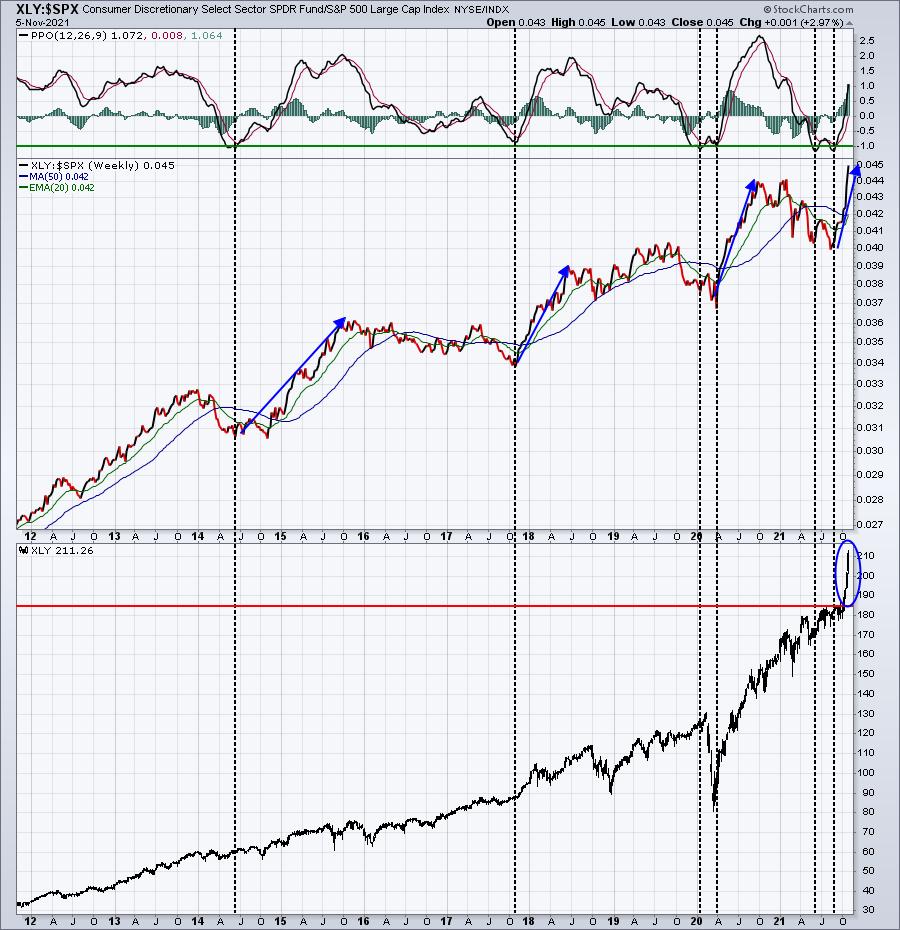 Every time the relative PPO of the XLY:$SPX reaches -1, it's an indication that the consumer discretionary group's relative weakness has run its course and nearing its end. We had just started turning up in terms of relative strength when the XLY made a significant price breakout. That further ignited the group and now we see that massive 1-month, 17% gain in discretionary stocks.

It looks to me like industrials (XLI) are ready to lead for the next month based on their similar chart: 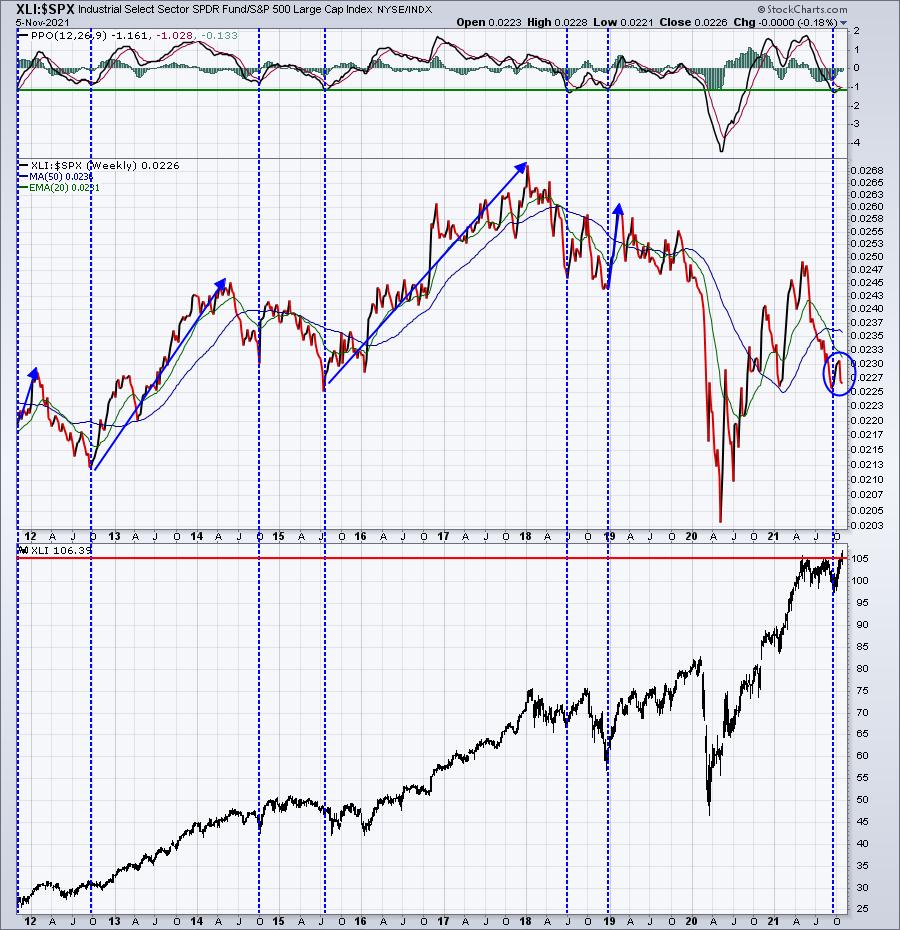 The XLI broke out and closed above 106 for the first time in history at Friday's close. The relative PPO is down near -1, which also has marked key relative bottoms for the XLI. The 2020 pandemic was an exception. Otherwise, the XLI seems to catch fire from this relative level. So this could be the start of significant relative strength, especially given industrials' affinity for November: 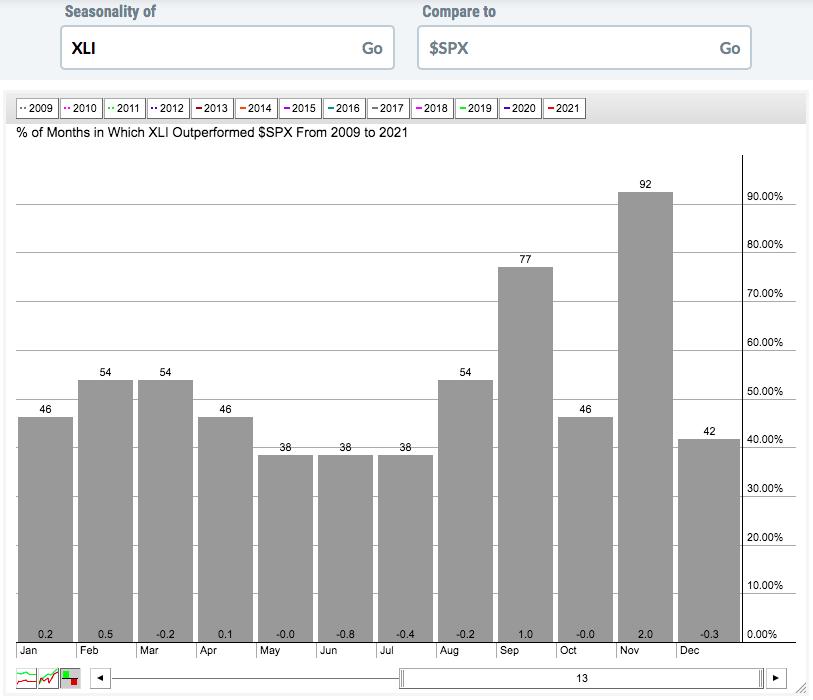 Over the past 13 years, and since the March 2009 bottom, industrials have outperformed the S&P 500 every November but one. The average outperformance is 2 full percentage points. That's the average! The next closest month is September, which is half the November outperformance rate. It's hard to argue against overweighting industrials right now.

My favorite growth vs. value ratio is the IWF vs. IWD. It's simply a very quick look at which area of the market that Wall Street prefers — growth or value. When the IWF:IWD ratio is climbing, growth is in favor. When the opposite is true, value is in favor. This is the current picture: 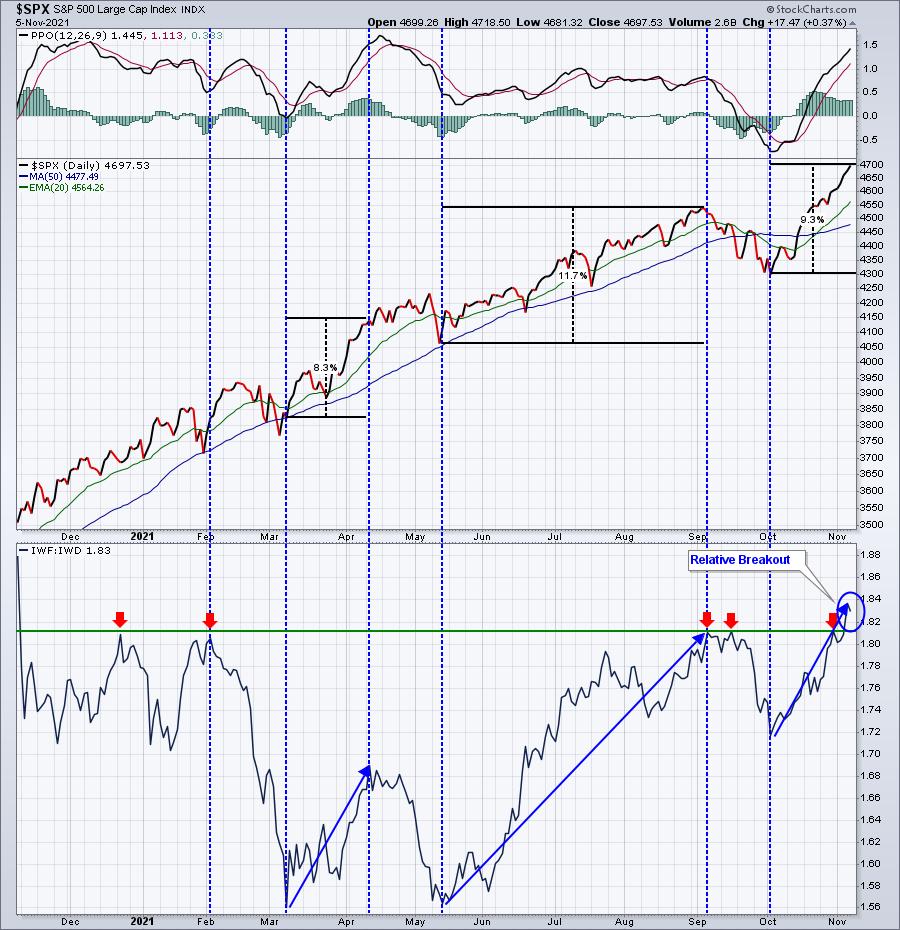 The IWF:IWD ratio is nearing its 52-week high. The chart above highlights the fact that the S&P 500 FLIES when growth is in favor, which it is right now. When the market favors value, it's not a bearish signal. It simply leads to more neutral overall market action. While I do favor growth stocks overall, the breakout in industrials could lead to more value-oriented stocks gaining during the balance of November. That could lead to a stalling of the current market advance.

Also, I select 10 equal-weighted stocks for each of our 4 stock portfolios at EarningsBeats.com each quarter. I generally favor growth stocks, so when growth is outperforming like it is now, our portfolios tend to do quite well. Here are our current quarterly and since-inception results through the Thursday, November 4th close: 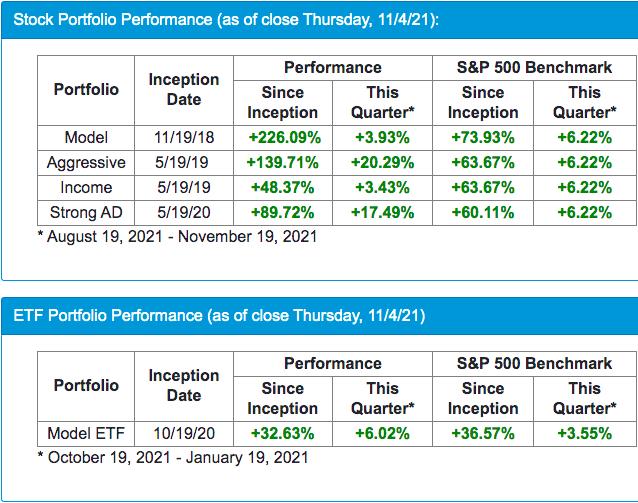 Our next stock portfolio "draft" is less than two weeks away. If you'd like to see which leading stocks we line our portfolios with, you can start your 30-day FREE trial HERE.

You just can't afford to bet against this industry. I'm seeing breakout after breakout after breakout. When I think growth stocks, my mind immediately turns to semiconductors. There aren't many industry groups, if any, that can grow earnings as rapidly as this group. There are many investors that simply will not buy stocks with PE ratios in the stratosphere. In my opinion, however, those PE ratios are there for a reason, and that reason is HUGE earnings growth in the future being priced in during a period in history with interest rates near all-time lows.

I cannot stress enough how valuable earnings growth is when interest rates are this low. Astute investors will overpay (based on historical standards) for strong earnings growth. It's the reason why the following semiconductor companies sport the PEs they do:

The companies where you'll find reasonable PEs are companies like Intel (INTC), which has a PE of 10. INTC isn't able to grow its earnings and Wall Street is punishing it and choosing its semiconductor alternatives that are showing explosive growth.

To simplify, I follow the money. Semiconductors have just broken out again vs. the S&P 500, putting them back in their familiar leadership role. That means we want to make sure we have representation in this space. Here's the current technical outlook: 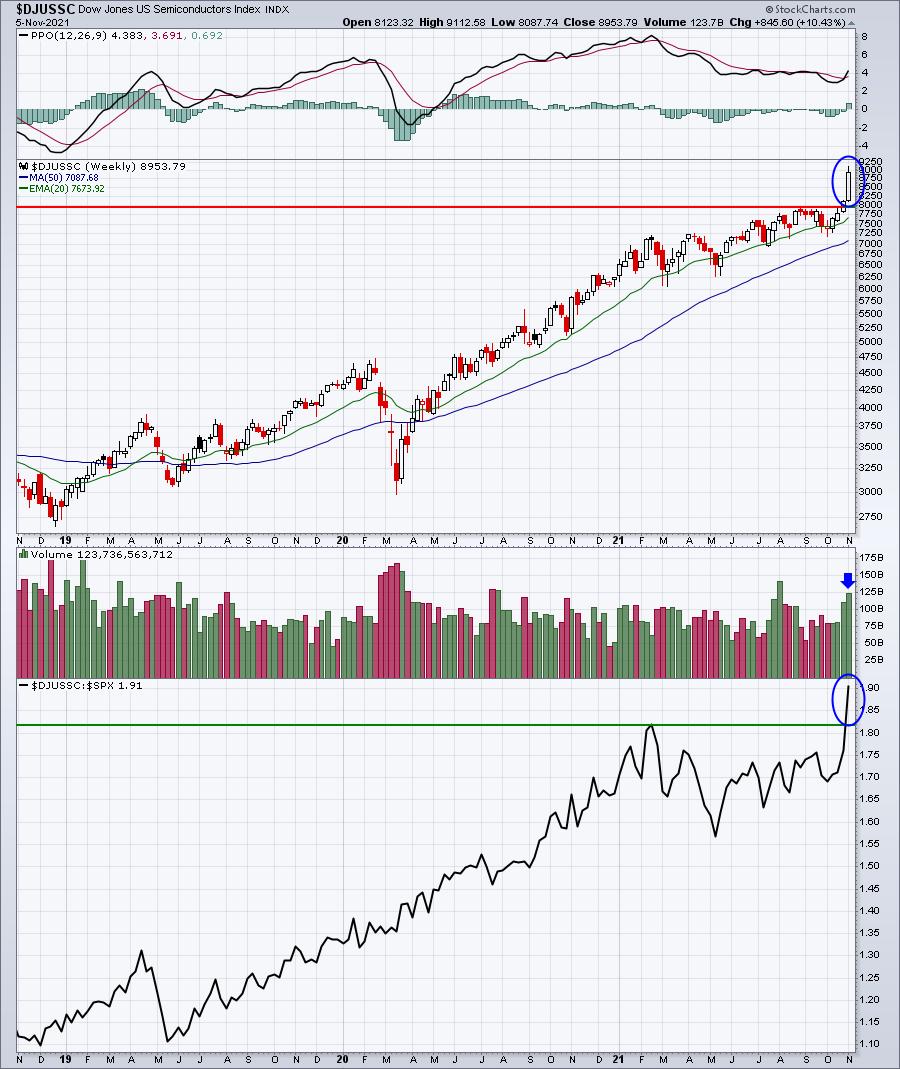 Semiconductors took a relative break for much of 2021, but their recent absolute and relative breakout is likely to lead to further strength. We want to make sure we're adequately represented by the group if we have intentions of beating the benchmark S&P 500.

On Monday in my FREE EB Digest newsletter, I'll be featuring a company that recently reported blowout quarterly earnings numbers and appears poised to move much higher into year end. You can subscribe (free, no credit card required) by CLICKING HERE and providing your name and email address. Feel free to unsubscribe at any time.