The markets have fallen for seven consecutive weeks, with the S&P 500 having its worst period in over 20 years (which was back when investors were grappling with the dot-com bubble burst). Today, this Index briefly fell into bear market territory, which is marked by a 20% decline from its high on January 4th of this year.

The continued deterioration in the broader markets this week followed news from retail giants Target (TGT) and Walmart (WMT) that growth was slowing in the face of high inflation and supply chain issues. The news was similar to Amazon (AMZN)'s market-rattling report of a slowdown in growth several weeks ago. All of which hints that consumers may have reached their limits. Consumer spending accounts for over 2/3rds of the U.S. GDP, and a slowdown in spending would point to a slowing economy.

Globally, things are looking grim as well as the war in Ukraine rages on, disrupting supplies of energy, wheat and other basic staples. The result is increased prices for these commodities which--coupled with earlier supply chain issues that remain in place--is at the root of the currently elevated level of  inflation.

While high inflation is a negative for most areas of the market, there are stocks that historically fare well for a variety of reasons. Below are the charts of 3 companies that have characteristics that currently make them attractive. 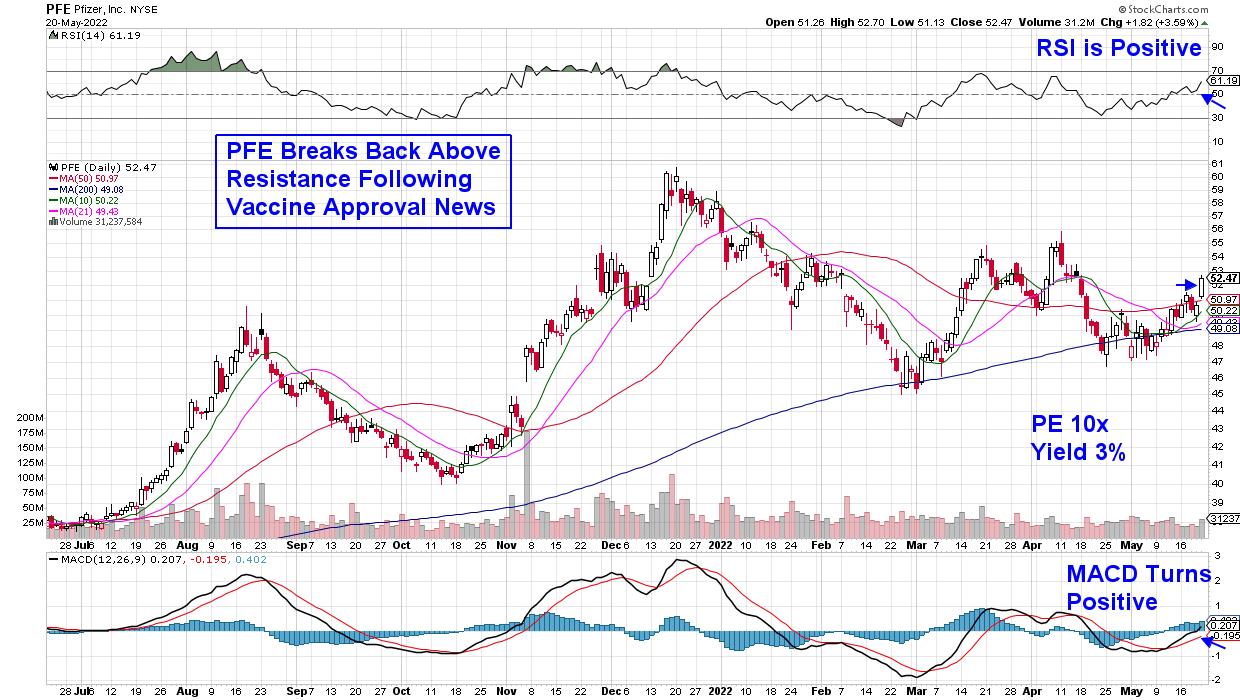 First up is Large-Cap Pharmaceutical company Pfizer (PFE), which closed the week above its key 50-day moving average on volume. Earlier this month, the company reported quarterly earnings that were 71% greater than last year, as COVID vaccine and treatment sales boosted results. Last week's break above resistance came on the heels of CDC approval for the company's booster shot for children aged 3-11. Other positive news for the company came on May 10th, when Pfizer announced their bid to buy migraine drugmaker Biohaven Pharmaceutical, which has Wall Street analysts raising earnings estimates going forward.

While all of this is good news for the fundamental backdrop of Pfizer, the company has additional characteristics which are making it attractive right now. In particular, the company is trading at 10 times the value of its last 4 quarter of earnings, while also offering a 3% dividend. Low multiple, higher-yielding stocks fare well in periods of high inflation, and the fact that it's in Healthcare--historically a defensive area of the markets that outperforms when the markets are in trouble--also adds to its appeal. 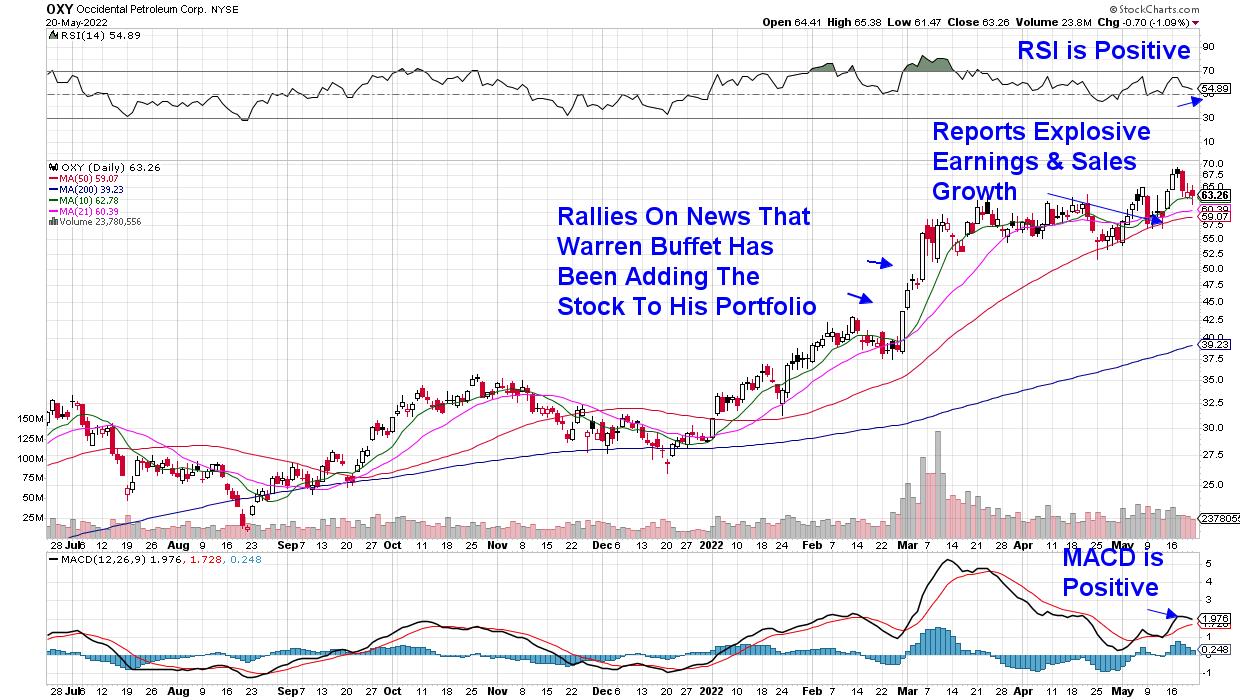 Next up is Energy stock Occidental Petroleum (OXY). Subscribers to my MEM Edge Report will be very familiar with this company, as it was first identified as a buy on January 4th when the Energy sector turned positive. It remains on our strong conviction list and while the stock has gained 90% since then, high oil prices amid reduced supply has kept the stock in an uptrend, with further near-term upside looking very possible.

Earlier this month, OXY reported earnings of $2.12 per share compared to -0.15 per share for the same quarter last year. In addition, they raised their dividend while authorizing a $3B share buyback program. Oil stocks fare well during periods of high inflation, and OXY's Price to Earnings ratio of 13 makes it attractive. 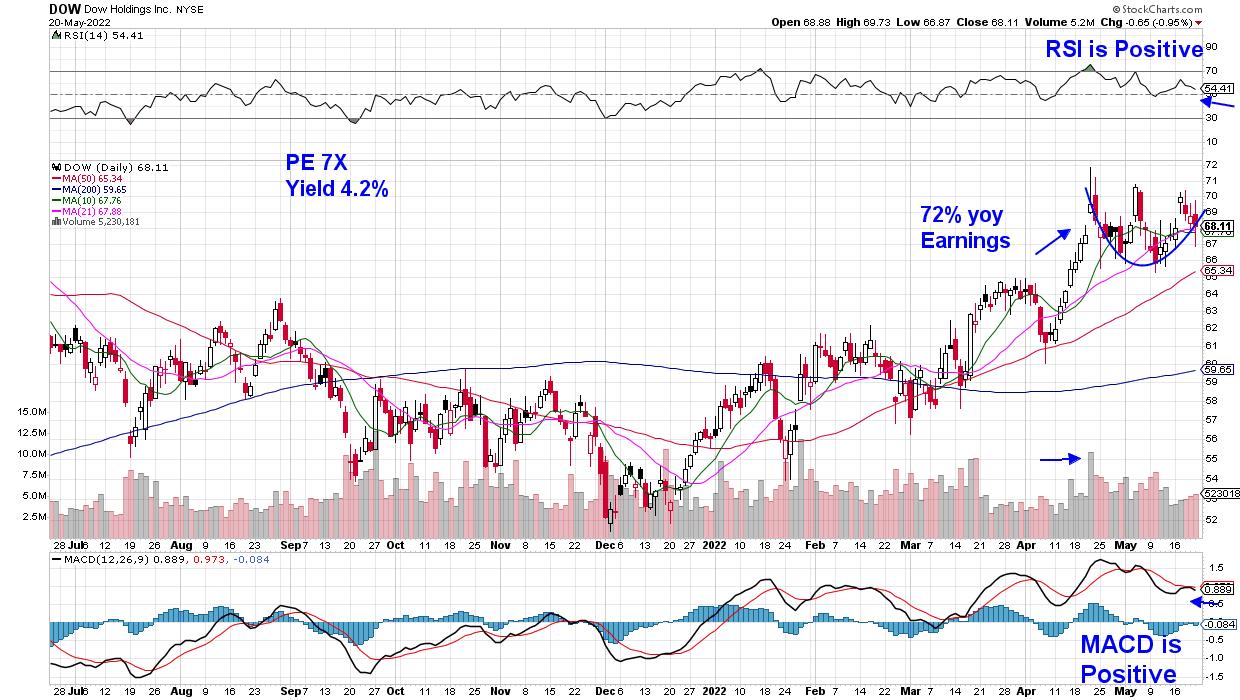 Last up is Dow Inc. (DOW), which provides chemicals for packaging and other areas. The company recently reported 72% year-over-year earnings growth, due to their ability to pass increased costs on to customers by way of higher prices. DOW is currently forming the right side of a base, with its RSI and MACD in positive territory. The stock currently has a price to earnings ratio of 7 times while offering a yield of 4.2%.

Chemical stocks are in the Commodities group, and this area has a history of faring well in bear markets that are plagued by high inflation. One of the winners in the 1974 bear market--which most closely resembles current market conditions--was chemical producer Dupont (DD), which produced a revolutionary printing system that year.

While the stocks mentioned above have attractive characteristics, it's important to remember that the overall trend of the markets is down. That is to say, similar to a bull market, when all ships rise with the tide, there may come a time when all boats sink as the tide continues to go lower.

I'm continually monitoring the broader markets and screening for stocks such as those above and, if you'd like to be alerted to a shift in market sentiment, as well as have access to my Watch List of possible winners in the next bull phase, take a 4-week trial of my MEM Edge Report for a nominal fee. You'll receive immediate access to our thoughts on the markets, with Sunday's live action report delivered directly to you.

On this week's episode of StockCharts TV's The MEM Edge, I review the status of the markets, highlighting areas and stocks that have positive charts and why. I also discuss the sector that was hardest hit this week, with further downside ahead.