There is a general theme this week that I want to tie a bunch of charts together with. A lot of the charts from today started their rally with the lows of late January and early February. Now it seems like this uptrend is being threatened on many of the charts. Even if they don't all change direction on the same day, it is important to note that we could be looking at a major investor rotation away from some of the trends that have been with us most of the year. Two of the most notable trend lines that snapped this week were the British Pound and the Japanese Yen. However, Gold, Oil, Natural Gas, the US Ten Year bond, and many other charts are changing or testing meaningful 6-month trend lines.

I'll start with the Yen ($XJY). The Yen has been tucked in a trading range for the last two months. While this week's action was still within the trading range, a couple of technical signals fired. First, the uptrend line was broken. Secondly, the 65 SMA in green was also broken. Both had been meaningful support for the currency. Looking at the zoom box, this week's price action actually rolled the 65 SMA over and it now is sloping down. Typically the Nikkei ($NIKK) strengthens when the Yen weakens. This may cause the Nikkei to move higher out of the trading range it has been in for the last two months and it could break out meaningfully from the 8 months of resistance around the 17000 level shown in blue.  Notice the Nikkei changed trend around the end of January. I have placed two circles on the currency chart. The Yen broke out above the trend line in December, pulled back and then started to move higher. That major change in the Yen happened while the US market came under heavy selling pressure from the end of December to February 10. Now we are on the other end of the trend. 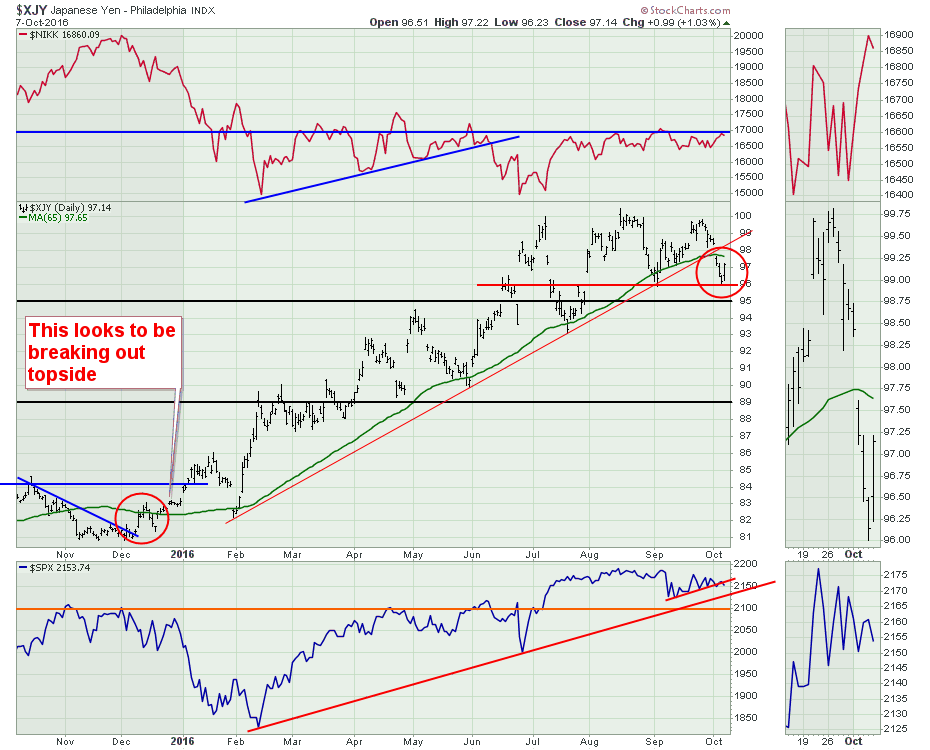 Next is the British Pound ($XBP). I don't know how many times this year we are going to talk about the Pound getting pounded, but Friday was a big move for one of the world's major currencies. So the Pound has been falling for at least a year. The Brexit result exacerbated the move. The $FTSE is moving higher as the currency weakens. That is the same response you might expect as exports improve with a lower currency. 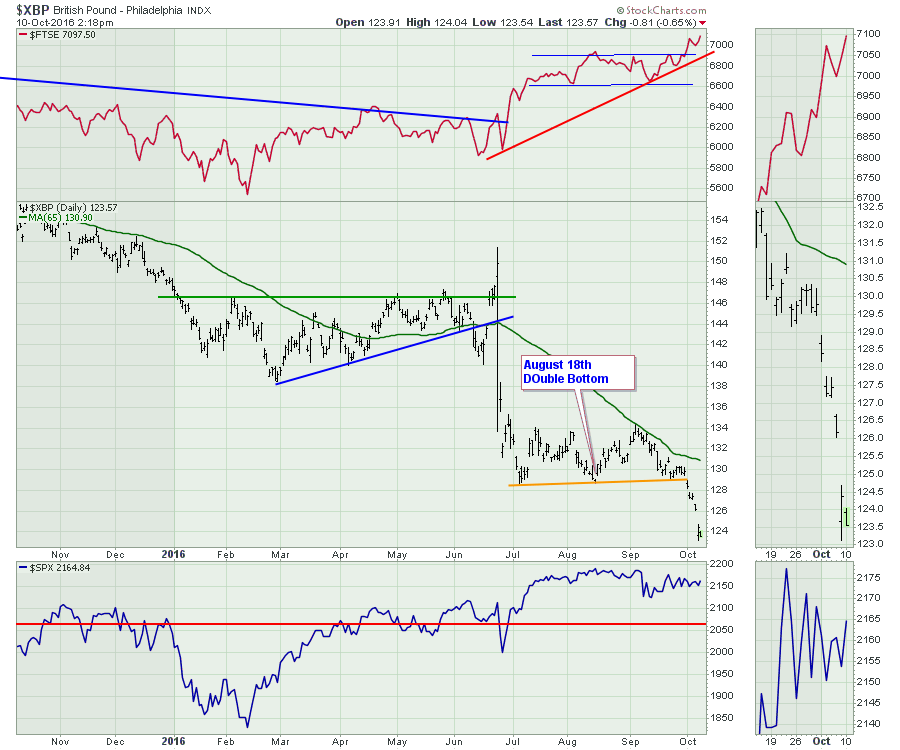 But having 2 major currencies move against the dollar this past week is important. The Euro has not broken out one way or another.

Here is the $USD. The red line snapped this week as the level breaks through the downtrend. This is a meaningful inflexion point, as this is breaking out even without the Euro breaking down. This is at the heart of intermarket analysis. So as the next few weeks roll, it is mindful to be watching for other major trend changes. 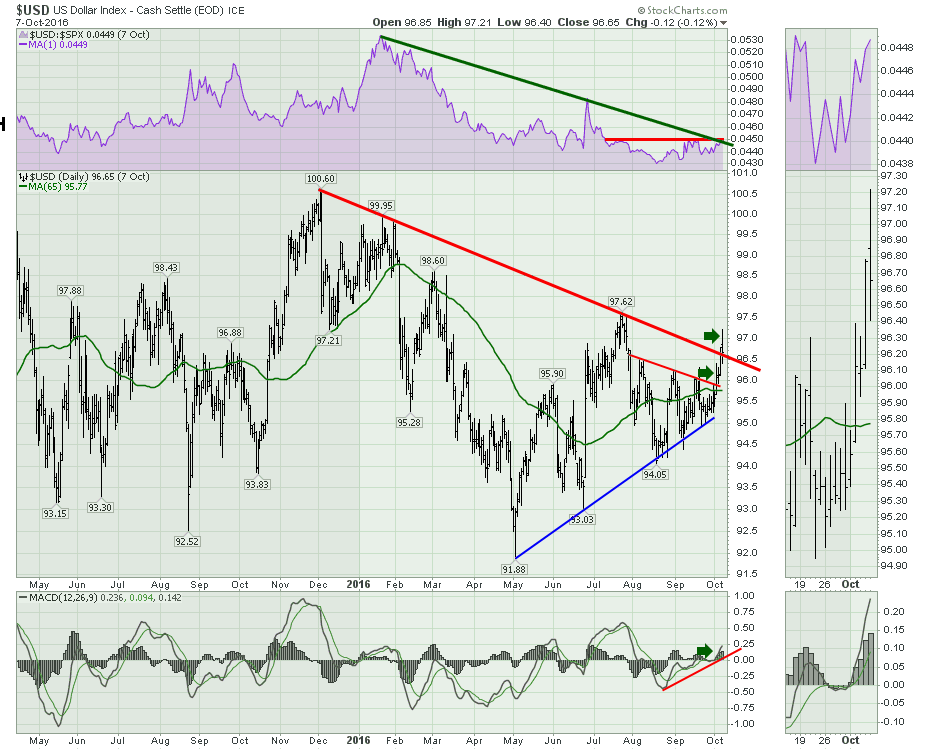 A stronger dollar will adversely affect commodities usually. This relationship does not have to happen, but usually does. Currently, West Texas Crude ($WTIC) is breaking out with the dollar breaking out. This adverse correlation can continue for a while, but it is relevant to be aware of the tension building between the currency and the commodity. 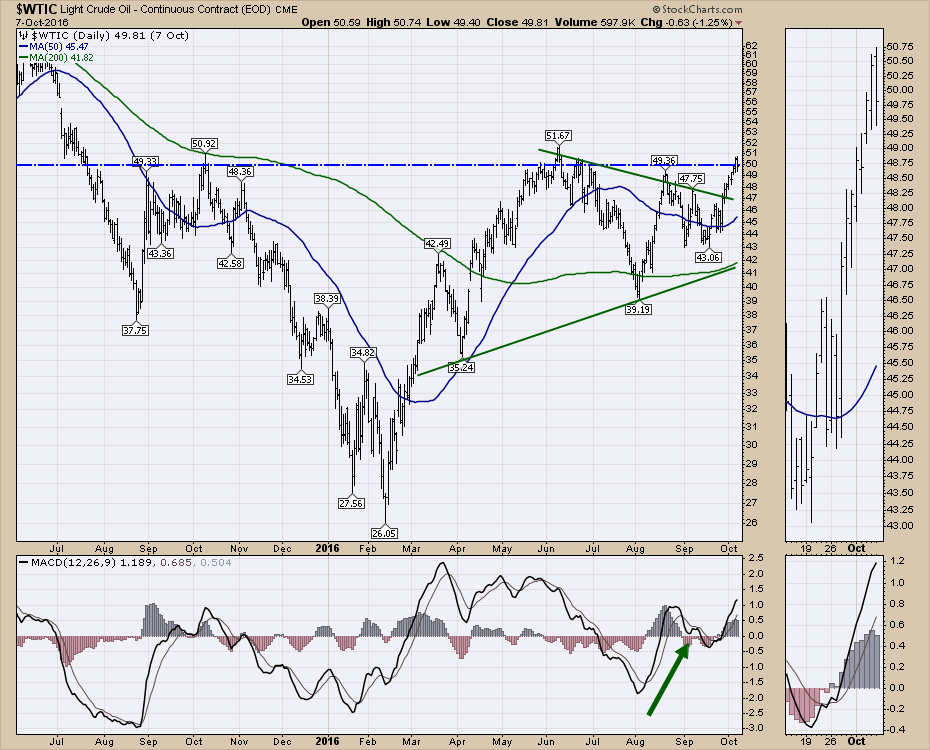 $GOLD is another commodity. It broke down hard as the dollar broke out. Here is a $USD chart with Gold plotted behind the $USD price. Notice the significant breakdown in Gold, signalling the continuance of the US Dollar move in my mind. 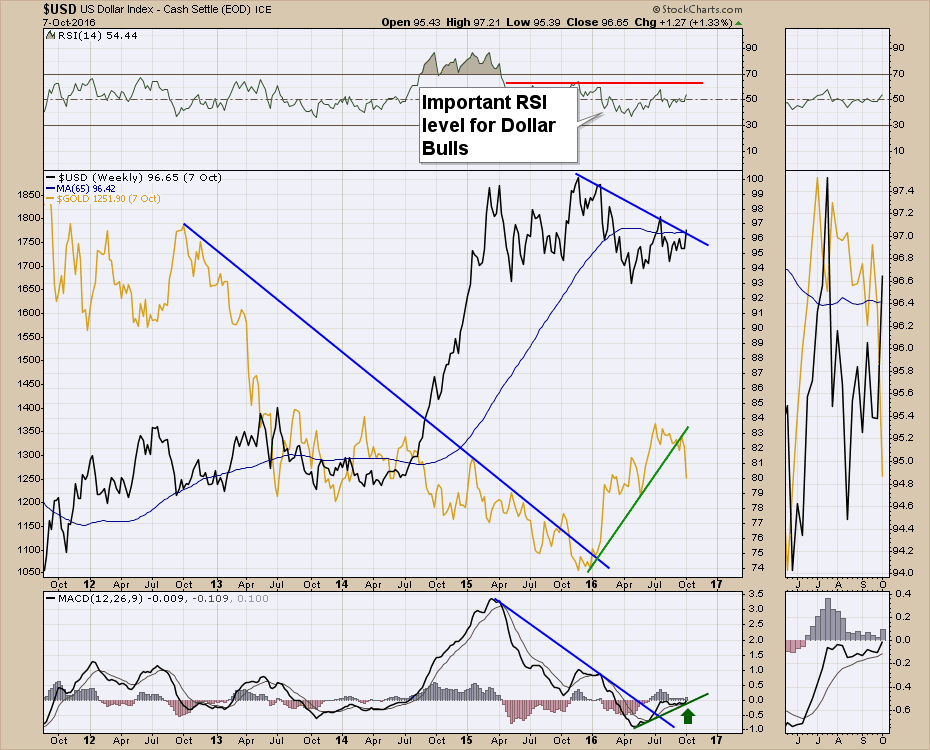 Let me insert a plot of Gold and the Gold Miners. They are both falling hard. Gold has a support level near here. Perhaps it can rally a little bit, but the $USD direction is important to Gold. The miners are in the lower plot. 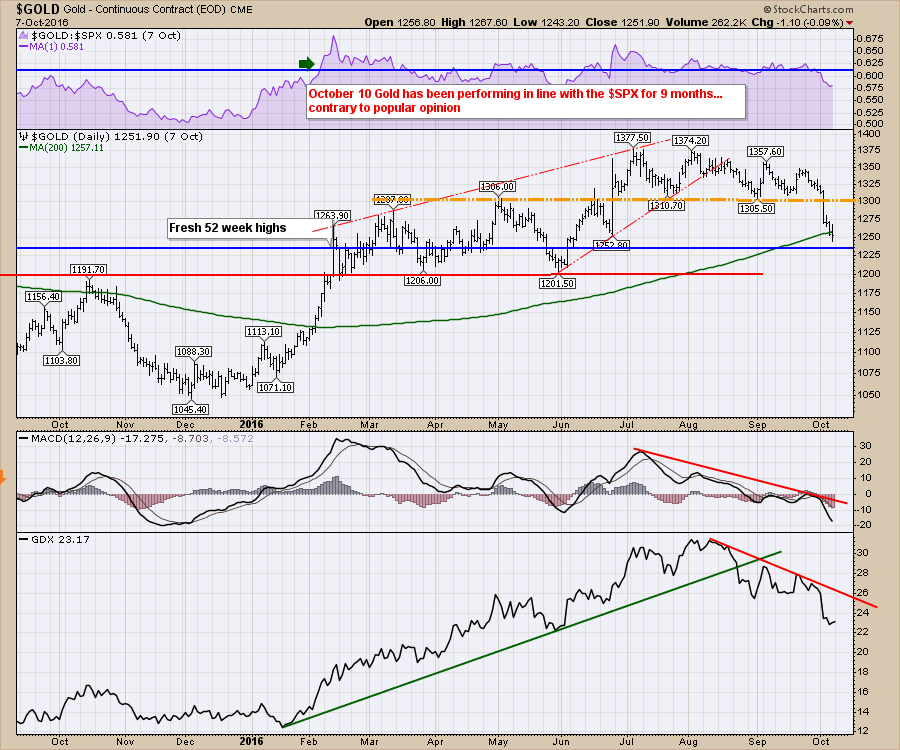 Another commodity that broke out this week was $NATGAS.  This is bullish and could move as high as $3.75. 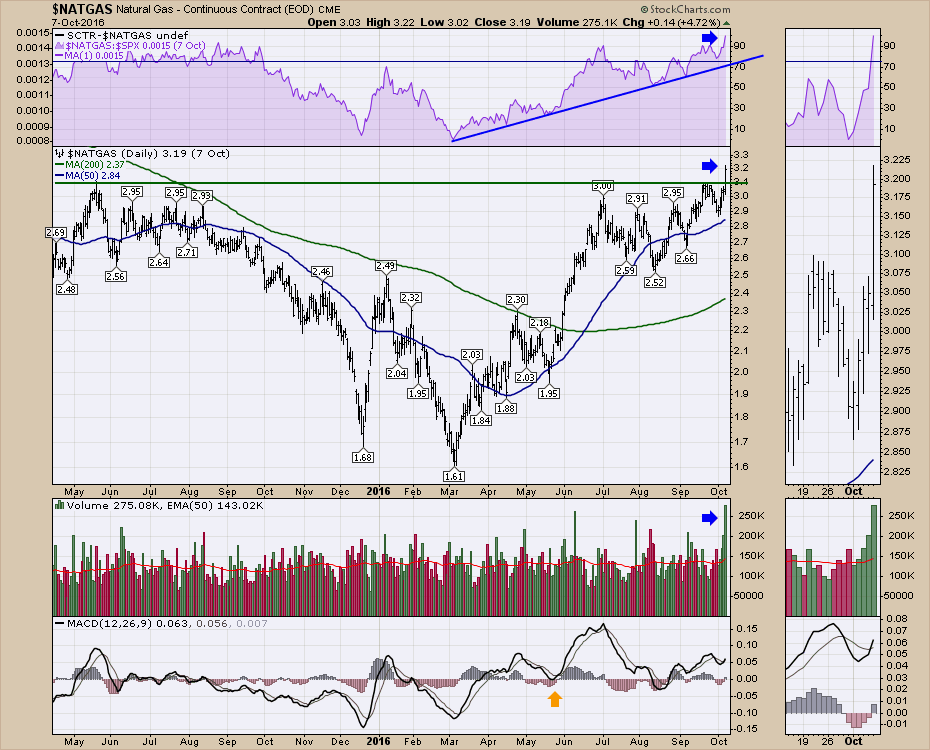 So it was a week of trendline breaks. On the webinar, I tried to explain a lot more about the intermarket effects and how this is potentially a major turning point for the broader markets. We have to watch and see what evolves, but be aware that there are trends changing here.

Here is a link to last weeks Commodities Countdown 2016-10-10 video. With the Canadians on holidays for Thanksgiving today, we will not get any commodity clues from Canada until Tuesday. How the Canadian currency and the commodities respond should be signposts for the $US Dollar breakout and the commodities at this trend change. It is not that the Canadians control the US Dollar. The Canadian economy is heavily resource based so that market could help show us if the Dollar is going higher or a failed breakout situation ensues. For a follow up on all of these trend lines breaking, don't miss this weeks episode. It's becoming a thriller! Register here.

The CSTA is holding their annual Technician's Day on October 15th, 2016. Follow this link to register. CSTA Technician's Day 2016-10-15. This is available in person in some major cities or by webinar for everyone.

The Calgary Chapter of the CSTA will be meeting Tuesday, October 11th.  WWW.CSTA.ORG for more information.