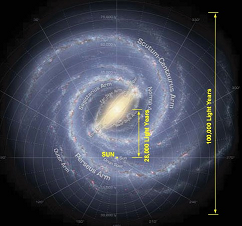 Warning: This article is for nerds only!

I have often stated that Standard Deviation (Sigma) is an inappropriate measure of risk.  For example, October 19, 1987 was a 22 Sigma event. The Dow Industrials fell 508 points.  An event that based upon the tools of modern finance, was impossible to happen, yet it did.  So I thought a good understanding of Sigma might be appropriate.

Definition: A light year is a distance not a time.  It is the distance that light will travel in one year.

Here is a list of galactic-like measurements to help put large sigma events into perspective.  There are many wonderful websites on astronomy and such.  I checked a number of them and found a general agreement with the numbers used in these examples.  Keep in mind that the numbers were generated with a scientific approach, not just a guess, but still could be in considerable error.  Most of the information can be found on www.universetoday.com website.

How many galaxies are in the universe?  Since we can only see a fraction of the universe, this is impossible to know, but most astronomers have said that there are 100 Billion to 200 Billion galaxies in the universe.  Their recent supercomputer put the number at more than 500 Billion, in other words there is an entire galaxy for every star in the Milky Way.

The obvious next question then is how many stars in the universe?  Since the determination for the number of galaxies in the universe and the number of stars in each galaxy is clearly a wide-ranging estimate, I’ll just use something near the middle of the estimates (aren’t you glad I did not use average?).  Then, 400 Billion galaxies and 400 Billion stars in each galaxy equate to 160 Trillion stars in the universe.  In scientific notation that is (4 x 1012) x (4 x 1012) = 1.6 x 1025. That’s a lot of stars, but keep in mind the purpose of this cosmic exercise is to get a perspective on high sigma events.  Looking at Table A you can see that this is close to about an 11 sigma event.

How many atoms in the universe?  Let’s use the conservative of the estimates just to keep it exciting.  If there are 300 Billion galaxies in the universe and the number of stars in a galaxy can be 400 Billion, then the total number of stars in the universe would be about 1.2 x 1023. Always refer to the sigma table to see where these numbers stand relative to large sigma events to keep them in perspective.  UniverseToday estimates that on average (there’s that concept again) each star can weigh 1035 grams.  Therefore, the total mass of the universe would be about 1058 grams (Note:  multiplication of exponents is easy, just add them:  23 + 35 = 58).  Since a gram of matter is known to have about 1024 protons (same as the number of hydrogen atoms), then the total number of atoms in the universe is about 1082.  From Table A you can extrapolate and see that it is about the same as a 19 sigma event occurring – and Black Monday, October 19, 1987 was a 22 sigma event.

What is the age of the universe? NASA’s Wilkinson Microwave Anisotropy Probe has pegged the answer to 13.73 Billion years, with a margin of error down to only 120 Million years (1.2 x 108).

What is the age of the Earth?  Plate tectonics has caused rocks to be recycled so it makes it difficult to actually determine the Earth’s age.  They have found rocks in Michigan and Minnesota that are about 3.6 Billion years old (3.6 x 109).  Western Australia has yielded the oldest rocks thus far at 4.3 billion years.  Moon rocks and meteorites have yielded about 4.54 billion years on average, which is also science’s determination for the age of the solar system.

What about humans?  Currently (seems they are always finding something older) the first homo habilis evolved about 2.3 Million years ago- these were the folks that used stone tools and probably not too different than a chimp.  According to Recent African Ancestry theory, modern humans evolved in Africa and migrated out of the continent about 50,000 to 100,000 years ago. The forerunner for anatomically modern humans evolved between 400,000 and 250,000 years ago.  Finally, many anthropologists agree that the transition to behavioral modernity (culture, language, etc.) happened about 50,000 years ago.  We humans are certainly a tiny fraction compared to the universe, and in particular, large sigma events.

Okay, I have thoroughly beat this “perspective” idea to death but hope you found the galactic information entertaining.  Basically, and practically, any sigma greater than 4 is usually addressed as infinity.  Moreover, in the case of the stock market, that means these events should never happen, yet they do.  And way too often! Table A shows various sigma, the percent of population, the probability of exceeding that sigma, and a calendar based interpretation.  I have noticed that Microsoft Excel and Wolfram Alpha produce slightly different values.  I think even with the best of intentions when dealing with extremely large or small numbers, one simple rounding error or inappropriate rounding can lead to differences, however, it did not affect the message here. 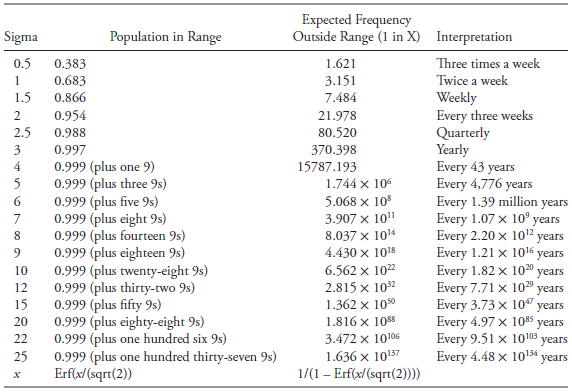 Note: Erf (see formula in last row of Table A) denotes the error function in statistics and actually has nothing to do with errors. It is related to Gaussian distributions, but is well beyond the purpose of this book.  You can find multiple definitions and examples on the internet.  Wolfram Alpha provides the ability to calculate both of the functions on the bottom row of Table A.

So what does this have to do with the market?  Nothing!  However, the understanding of how pathetic it is to use Sigma as a measure of risk is the message.  Modern finance is fraught with this type of abuse; stick with technical analysis.

Trade with the Correct Tools,