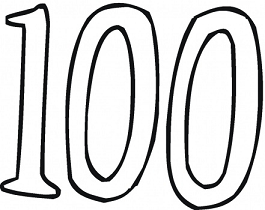 This is funny. A few articles ago I commented on the foolishness of the media’s focus on Dow 20,000 and now I’m focusing on my 100th blog article.  Is that being a hypocrite or what?  I have been racking my feeble brain trying to think of an appropriate topic for this milestone.  Maybe I'll start with a little history.

When I got involved in money management in the 1990s with MurphyMorris Money Management, Inc.; and then later with PMFM (now Stadion) in 2004, I found myself in front of advisors at the large wire houses and insurance companies.  These advisors had been in the business of selling investment strategies for decades and most were totally wrapped up in the concepts and nuances of modern finance.  After wearing many hats at Stadion and with a large portfolio management department in place, it allowed me to go out and make presentations to these folks hoping to sway them on the merits of technical analysis and tactical money management.  These seasoned advisors did not want to hear from a salesman; they wanted a portfolio manager.  In my mind, it did not go all that well initially; as most of them had heard the Wall Street mantra that technical analysis was a black art, not far removed from witchcraft.  Let’s put it this way; more thought poorly of technical analysis than those who at least were unsure.  If you think about it, that is exactly what Wall Street wants, as a technical approach doesn’t need all the crap generated by the large wire houses.  Often touted as research, but more closely resembling marketing.

I then changed my approach from selling technical analysis to showing them what was wrong with modern portfolio management and its many facets.  That was it!  Stop selling them on something they had been told wasn’t good and focus on showing them all the problems with modern portfolio theory and all of its derivatives.  Not just telling them what was wrong, but showing them.  Over the past 99 articles I have covered many of those issues.

One of the primary concepts I also discussed is that discipline is paramount for success in following a tactical model.  I told them that I had been on a diet my entire adult life.  I would tell them the story about my wife and I driving in the mountains of north Georgia and stopping at a service station for gas.  It was an old station with old pumps so I had to go inside to pay for the gas.  I saw a candy bar next to the cashier and bought it; knowing my wife would not want one.  As I’m walking back to the car eating the candy bar I can see her look of dismay through the window.  When I get in she says, “You just don’t have any discipline.”  I said, “That’s not true, you don’t know how many of these I wanted.”  I tell that story because discipline is not a knob or lever you can set each day; you are either disciplined or not.  If you are not disciplined, you will not last long in this business.

Here is a partial list of articles in which I am challenging modern portfolio theory:

What is it with Modern Finance

Risk is More than a Four Letter Word

A Different Perspective on Standard Deviation

And I have to link to this one as it received a huge number of hits, plus Chip liked it.

Remember, academic finance is the marketing department for Wall Street.

I must admit the article idea well is getting very low.  If you wish for me to comment on a particular subject; I would appreciate you mentioning it in the comment section.  And with my sincere thanks.