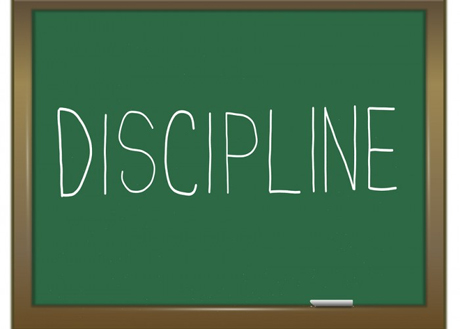 Discipline is the Key!  You should look up the definition for both the noun and the verb.

Over the years I've stressed the importance of having discipline in any investment strategy, and that is certainly still the case. A couple of years ago, when the market was in an ongoing up move, I had to take each small correction seriously because I never knew when it would turn out to be more than just a simple pullback or correction. I was whipsawed at times, selling my positions during weakness and then having to buy back in when the market turned up again, often at a higher price. While that type of activity can be frustrating, I understand it goes with the territory because my model can't be perfect. If I had allowed my frustration to influence my decision-making process, I might not have missed the worst bear market in decades back in 2007-2009.  Avoiding bear markets and trying to participate in the up moves is a very comfortable strategy but also one that needs rules and the discipline to follow those rules.  I’ll probably repeat that a few times in this article.

Now I find myself on the other side of the fence. The market has suffered some losses and the overall tone among investors is of mounting concern. It's easy to start believing these volatile times will last forever.  In the early days of an uptrend it is tough to know if the good times are finally back or if it is just another bear market rally. The key to success is having the discipline to follow my model, which measures several internal indicators that gauge the risk and health of the market. These measures help me eliminate some of the whipsaws that would occur if we focused on price moves alone.  I wrote an entire series of articles (1st one on January 2, 2018 and the 14th one on Sept. 26, 2018) on Building a Rules-Based Trend Following Model last year.

But still, it is possible (maybe probable) that we will have some false starts along the way as this market begins to recover. I may move some money back into the market and then have to abort the position and move back to the sidelines if there is no follow through. If this happens it will be frustrating, but it is the only way to make sure I am there to take advantage of the future gains that are sure to come.  Remember equivalent return math.  If you ride the market down 50%, you must double your money to get back to even; and getting even isn’t much of a strategy.  Let me make this very clear; we are currently only in a pullback stage, not even a correction yet.  I do not know the future, along with the other 7.5 Billion inhabitants of Earth.  I just know that every bear market starts with a pullback, that brings out the bottom pickers, then it might move to a correction, and once it becomes a bear market, at which point most have already lost a lot of money.

What follows is a story I recall from a client interaction years ago and it has a good lesson.  I had a call from a client who asked how long I thought we will be in the money market (that’s where I parked money when the model calls for cash). His thinking was that if I was going to stay parked on the sidelines for an extended period of time, he would just move his money to a bank money market until I was ready to get back in the market. By so doing, he could save the management fee he was paying me.  While I understand that no one wants to pay a fee to sit in a money market, this client's thinking could cost him a whole lot more than 1-2%, here's why:  Once I started legging back into the market according to the model and its rules, he will probably wait too long to let me get him back into the market.  But the most important reason to not follow his suggested strategy is the potential return that could be missed in the early days of a recovery. It is important to understand that no one really knows when the next bull market will begin. True, it could be sometime next year, but it also could be next week! They don't ring a bell on Wall Street to let everyone know the coast is clear.

If the client moved his money to the bank, he would have to make two decisions - the decision to get out and then the decision on when to get back in. And it's tough sometimes to jump on the train after it has left the station. A prime example of how this "emotional" thinking can backfire was the end of 1999. Several clients were so worried about Y2K, an external event, that they instructed me to keep their money out of the market regardless of what my model was saying. Sure enough, I had a buy signal in early November and between that time and the end of the year I made more than 30% in my growth accounts. No one really anticipated that happening, including me, but it just goes to show that you can't predict the market. Those clients who make decisions with their emotions were forced to get back in at much higher levels, effectively increasing their risk, not decreasing it.

When I am in a defensive position you should just be content with the fact that I’m not suffering losses like the buy-and-hold investors. Don't fall prey to pessimism and despair and begin thinking things won't ever improve. One thing I do know, is that the market will not stay bad forever. And when it does start back up, I will have the discipline to move back in and enjoy the gains that can only come from equities.

I take great comfort in knowing that my system has proven, in all types of market conditions, that I can capture most of the good times and miss most of the bad times. And that's why I've handily outperformed the market over the years.

"The market can remain irrational for longer than you can remain solvent." - John Maynard Keynes

I have a small request; please sign up for the email notification whenever I upload an article; it will help me have a feel for how many read my ramblings. The sign up is below each article. It will not ever be used for anything else.  Thanks.